Of Babies, Birth and Indecision 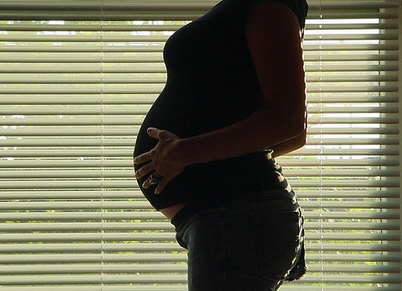 I was recently at a dinner party with a few girlfriends, and we got onto the topic of babies—conceiving, carrying, birthing and raising them. I imagine that in the living rooms of vagina-clad 30-year-olds across America, this is a conversation bandied about quite often.

The hostess was lamenting the fact that her boyfriend would soon be moving in with his cat, a creature that not only demanded affection, but got hair in her morning coffee and generally was alternatively cloying and aggressive. It was not only an unwelcome addition to her life, but a perplexing one. She received knowing nods from the rest of the women. None of them were "animal" people. Dogs and cats were fine, they shrugged, but they could take them or leave them, really.

"And when I don't want to pet some slobbering hairy beast that's come lumbering into the room and let it lick my damn face, people look at me like I'm some bitch or there's something wrong with me," one guest mused. "Like, 'How can you not love dogs?!'"

Personally, I'm a dog fiend. I'm the girl whose voice rises three octaves upon seeing some spaniel, shit tzu or a mutt so ugly it could only be a cosmic joke . . . and I rush to pet them. Maybe it's hereditary; my parents are both animal-heads and I was raised with a proper menagerie of creatures. I pet a dog's head and feel the heady rush of serotonin coursing through my brain. I love being greeted when I walk in the door like I'm a blood-spattered vet no one thought they'd ever see again; a dog's excitement is palpable. Every time I come home I'm Lazarus—I've arisen from the dead.

When I express this opinion to my dinner party comrades however, they stare blankly. The cheese stands alone.

Babies on the other hand—now that's the stuff. "Oohhh," they coo, wiggling their fingers in joyful memory of babies past.

"I'm serious!" I stammer. "You think people are weirded out that you don't want to pet their dogs? Try not being excited about someone's baby. I feel like a monster."

I can always feel parents' eyes burning into me as I try to muster the proper amount of enthusiasm for their fleshy little blob drooling away in the stroller. Inevitably, my feigned appreciation is never enough. The parents can always smell my indifference; my cooing won't cut it.

It's not that I wish babies harm, I'm not a monster . . .  I just find them incredibly boring and a little disconcerting. The rolling, unfocused eyes; the mewling for milk; the steady stream of fecal matter; a total inability to communicate other then screaming. The not sleeping. The throwing up. The, "I'm going to ravage your nipples night and day until they're raw and red." The complete lack of motor skills. They just seem so utterly blank. And demanding!

You think dogs want a lot of attention?! Psh, try hanging out with a 2-month-old for an afternoon. What a narcissist.

Yet when my brother had a beautiful bouncing boy a year ago, I felt my icy heart start to melt. I would greet his photos of the baby with a genuine squeal of delight; I would even pass around a particularly cute video to friends. I would linger over baby shoes at some store, exclaiming as if trapped in a bad sitcom: "Oooh, they're just so tiny!" Seriously. It was starting to get weird.

Oh. My. God. I thought. Baby fever? It can't be real. Jesus Lord above, say it ain't so! I don't even like babies!

Scarier still—like every god forsaken book, blog and random old broad has warned me: come 30, your clock. starts. ticking. And it has.

Still, my fear hasn't alleviated. It's like being inexplicably drawn to a cage containing a snarling vicious bear. It's busy gnashing its teeth, and yet with every moment I'm stepping closer and searching for the key to let it out. All the while my heart is in my throat and my bowels feel like they're going to release from sheer terror.

I decided to break down my neuroses into a kind of list to see if I could suss out the tension between my enduring baby anxiety and the not-so-gentle tug of motherhood.

1. Having a baby is frighteningly forever

First, there's something that is so decidedly permanent about bringing a child into the world. Contrary to popular belief, Catholics and romantics everywhere—marriage is not forever. You can get the hell out of dodge. As Paul Simon once warbled, "You drop off the key Lee. And get yourself free." You can start over, lick those wounds, sell the house, give away the dog you got together. It's like hitting a filthy car with a low-powered hose. Everything isn't washed away, but you're clean enough for someone else to take a ride.

This isn't to say that I condone divorce or think that untangling two lives isn't without agony. (I was recently sharing a home with someone for just three years, and let me tell you, I was so gutted, I thought I was going to throw up.)

But the point is, there's no turning back on a child. No take-backs. No "loving each other wasn't enough" bullshit. And while I'm in the Unbearable Lightness of Being camp—which is to say, I like my life and headspace to have a little weight—the foreverness of having a baby is scary as hell to me.

2. Pregnant bodies freak me out

That rotund "look" alternatively fascinates and repulses me. Some women seem to swell to grotesque proportions—they're waddling and sweaty and huge-breasted and a bit bovine, if you want my honest assessment here. I once ran into a former co-worker of mine; I hadn't seen her in about 6 months or so and she was set to give birth any day. Honestly, she was unrecognizable. I was horrified. Had she "let herself go"? Was she just unlucky? Did her husband want to weep and rip his hair out, his once beautiful wife rendered asunder?

I tried to imagine the reverse situation. If my lover/husband's body was undergoing this archetypal shift, and becoming a vessel for life, I would of course continue to love them just as deeply—arguably more as we stood on the precipice of the proverbial cliff. But could I honestly conjure the same lust if he was 50 pounds heavier and a bit bulbous? And what if the weight never came off? Is that fair?

3. Sacrifice is the name of the game

You know your life—regardless of money and nannies and family and friends helping out—is going to fundamentally change. By definition you are no longer at the center of it. But perhaps this negation of self is at the very crux of desire for a child? Maybe it's too tiresome and narcissistic to focus your entire being on satisfying yourself?

Then again, having a child has also always seemed like the very height of megalomania in a way. What could more satisfying to the "I" than raising an extension of yourself in your own image? That's some messianic shit right there. If the sole intention was creating a family and raising a child, there would be more adoption. It seems to me the desire for a child is inextricably wrapped up in extending our own identity . . . maybe even countering our own mortality, our tiny flickering flame.

Again. I toggle between thinking this is just about the most moving thing on earth to feeling utter confusion and nausea. The wet angry mouth blindly searching for the pink nubbon of sustenance; it's just so animalistic. And your breasts leak all the time. Which is just about the least sexy, strangest thing ever.

5. Responsibility is a four-letter word

Can I be a responsible human and not be filled with resentment? If there's anything on this earth that brings my joy, it's spontaneity, the sheer bliss of not knowing what's going to happen. Freedom is staying out till 2 AM on a Monday because it's a killer Motown set and I don't want to go home. Freedom is strolling around my apartment sans pants with a fat spliff, screaming the Talking Heads as I sip whiskey and chop up chicken breasts for nuggets. Freedom is losing my keys, wallet and phone and smashing all the pint glasses in the kitchen by accident, and knowing I have no one to answer to but myself.

What do I do with all that freedom? How do you know you won't flip out and go all Sylvia Plath and write poems about your children's "Ionian death gowns"?

I'm scared shitless, but it also feels strangely inhuman to never create another human. And to know you'll pass into oblivion with so very little to carry your tiny torch.

And so I'm left suspended. Somewhere between my friends who snort and widen their eyes in disbelief at the very idea of babies, already savoring their childless bliss and plump bank accounts . . . and girlfriends who so desperately want to be a mother, they're seriously considering artificial insemination sans a formal partner.

Forgive my saccharine finale, but I've been thinking about this passage from Cheryl Strayed's Tiny Beautiful Things a lot recently:

I'll never know, and neither will you, of the life you don't choose. We'll only know that whatever that sister life was, it was important and beautiful and not ours. It was the ghost ship that didn't carry us. There's nothing to do but salute it from the shore.

The question remains whether my children will wave with me from the shore, or if I'll stare back at their chocolate-smeared faces as their ghost-ship slips back into the shallows.