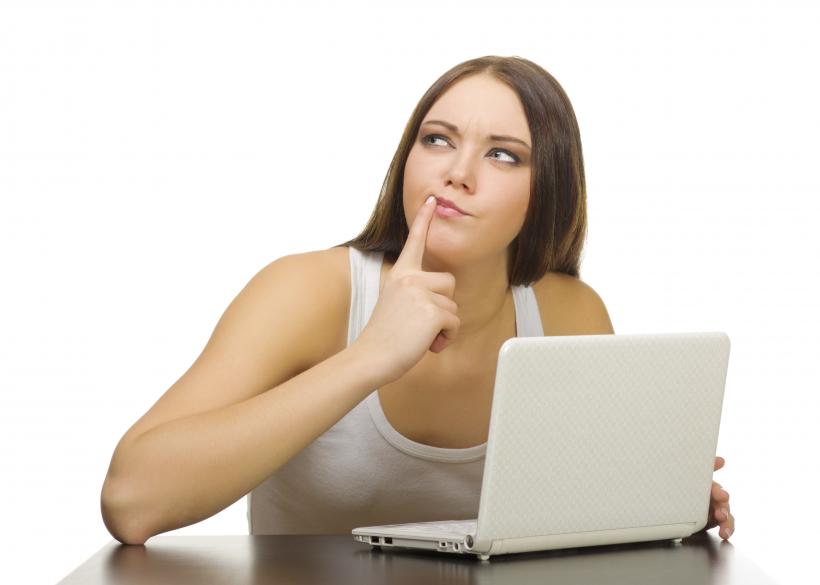 Taking trolls to heart is trying to rationalize the irrational. And there’s just no logical explanation for why so many men’s rights activists are reading Bustle.

Then . . . you read the comments. And after learning how morally deficient you are, why your friends and family are unfortunate to know you, and what species you really belong to, you resolve never to read the comments again.

But it doesn't end there.

The trolls find you on Twitter. They talk about how wonderful it is that natural selection won't let you reproduce. They find you on Facebook and describe flaws in your appearance that you never noticed. They find your email address just to send messages like "you are a fucking idiot." Some even threaten to rape or kill you—and they don’t spare you the details of how they plan to go about it.

As someone who tends to take things personally, I was unprepared for this side effect tainting my otherwise exciting accomplishments. So I reached out to several online communities of women writers, most of whom had also dealt with backlash for their online presence. Here, I’ve rounded up some of the best advice they gave me in order to help other women stay strong and speak out against sexism—even when they are victims of it.

1. Remember who you're dealing with.

Chances are, if the criticism weren’t directed at you, you wouldn’t care about this person’s opinion—because trolls aren’t the kind of people whose opinions most of us value. These are people who sit at their computers searching for people to harass; judging by my Twitter attacks, they literally search hashtags like #feminism and #everydaysexism just to fan their own flames. They read feminist-leaning, women-focused publications for the same purpose.

"Image how awful it must feel to be someone like that," Elisabeth Fairfield Stokes, an essayist who teaches writing at Colby College, told me. "I really do think trolls are their own punishment.”

Journalist and Pink Bits author Kat George saves her tears for the people she respects: “The day Kurt Vonnegut (wakes up from the dead and) tells me I'm a terrible writer is the day I'll cry about it.” In the meantime, “if Joe 16-year-old nobody wants to call me fat because he doesn't agree with my opinion on Lady Gaga, I just can't see a way to take that personally.”

Taking trolls to heart is trying to rationalize the irrational. And there’s just no logical explanation for why so many men’s rights activists are reading Bustle.

2. Remember who you are.

Whether the trolls agree with you or not, the fact is that you’re published on a platform where they can only comment.

“I get PAID to give my well reasoned opinions across many different publications, and my career is thriving,” said George. In contrast, “the people who troll me are people who have nothing better to do with their time than to say pathetically NASTY things for FREE.” She continued with a rather humorous analogy:

“You are a wonderful flower who is blooming all over the place, and of course some stray dog with animal AIDS is going to wander past and see your colorful petals at some point and piss all over it because dogs will piss anywhere without even thinking about it.”

Hey, you may be covered in piss, but at least you’re the flower and not the dog.

3. Remember why you’re writing in the first place.

If you said something that stirred up a reaction, chances are you felt it needed to be said. Even if you got burned in the process, you wrote the piece in service of a larger cause.

“What we're writing about means something to us and other people,” said Hayli Goode, a health and beauty writer for Bustle. “We have an amazing opportunity to share something through our words that we feel is important.”

When your self esteem takes a hit, remember that someone somewhere probably felt validated or gained awareness of an important issue because of you.

The most practical advice I received was to avoid engaging—these people are beyond redemption and will only say more nasty things if you reply—but exercise your power by blocking trolls so they can’t hurt you and reporting them so they can’t harm others. This can help other women, since trolls tend to be repeat offenders, and also gives you a sense of justice and control over the situation.

5. Consider the psychology of trolling.

Learning about comment culture as a moderator has helped Maisha Z. Johnson, an activist and writer for Everyday Feminism, Black Girl Dangerous, and Pyragraph, take comments less seriously. For example, a mean remark in the first few comments can bring out the worst from readers who didn't originally have anything negative to say.

"You would not believe how hard people try to find something to complain about," she added. "That alone is reason enough to try not to take it personally, because it's really so much more about them than it is about you."

6. Keep your friends close and your enemies far away.

Johnson's writing and moderating have also made her aware of the overrepresentation of readers with negative reactions in comment sections.

"The very tiny portion who feel passionately about something critical will be the ones to comment. I know this from the amount of traffic, shares, likes, and behind-the-scenes positive messages we get. You can look at that and know that hundreds or thousands of people absolutely love it—but from the comments, you'd think it totally bombed and everybody hated it . . . Find a way to feel connected to the silent majority who love your work.”

I’ve also found this to be true on social media, so whenever people email or tweet to me with positive feedback about my articles, I make sure to connect with them and express my appreciation. By paying attention to these people, I create more positive conversations surrounding my work to detract from the negative ones. Supportive online communities like the Facebook group Binders Full of Full-Time Freelance Writers can also provide a source of positive voices to counteract the deceptively loud negative ones.

7. Examine the societal context of trolling.

Trolling is a way to silence women. It’s not just about me and Joe Shmoe in his parents' basement. It’s about sexists who take issue with women voicing their opinions and bringing sexism to light. Once I realized this, some of my self-deprecation turned to indignation, and my resolve to brush off the haters and keep writing grew.

8. Watch trolls say the exact same things to everyone.

It’s hard to take something personally when you see it happening to everyone else. It’s especially hard to view trolls as trustworthy sources when you’ve read the piece they’re talking about or know the author. For example, a troll once called Ravishly editor Kelley Calkins a "sociopathic, self-obsessed reptile." After comparing this judgment to my own experiences with Kelley, I now know never to trust a troll to determine which animal class I belong to.

So, if it helps, scroll through comment sections and watch trolls build straw women just to tear them down, make belligerent remarks that have nothing to do with the piece, and call conventionally attractive people ugly. You’ll realize how little your piece has to do with their trolling, and you might get some laughs out of it too.

9. Be glad people are talking.

Don’t lose sight of what incited the trolling in the first place: you voicing your opinions on a platform that a bunch of people read. “Even if they're uninformed jerks, you wrote something that moved them enough to reply,” said Martha Sorren, a writer for Bustle and Seventeen.

Remember the “pinch-me” feeling you had when your first piece went up online, before you scrolled down to the comment section, and how the knowledge that you are now a published writer dwarfed the sting of the comments? Carry that elation with you as you continue to write, and let it shield you from the trolls who try to creep under your skin—because if they succeed in silencing you, that’s a victory for patriarchy.

“Let it hurt. Then realize that you’re living your fucking dream every day,” said sex educator and author Allison Moon. “The trolls can stay under their bridges and heckle from the depths. I’ve got a lot more work to do up here.”

If you like this article, please share it! Your clicks keep us alive!
Tags
trolling
tips
advice
women
writers
online harassment
feminism
bustle