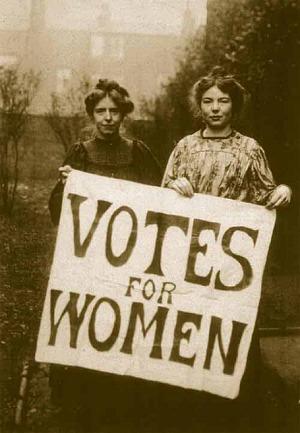 Every now and then we are reminded of the shocking fact that women used to have no vote. More shocking still? U.S. women only gained the vote 94 years ago, following decades of intensive suffragist efforts.

This document—entered in the records of the House of Representative in 1866—lets us see common arguments against women’s suffrage 18 years after activists at the Seneca Falls Convention first asked for the right. The pamphlet lists the objections.

And then the writer blasts them.

Takedown: “But political divisions do not . . . make men quarrel half so much as religious divisions; and if you allow wives to do their own thinking in religion, why not in politics?”

Takedown:  “Then why not advise good men, as well as good women, to quit voting?”

Takedown: “I should think not, unless she spoke more to the point than the average of men. Perhaps she would; no telling till she tries.”

Takedown: “Show me the husband who does not assure his wife that his day’s work is harder than her’s [sic]. How absurd, then, to suppose that he has time to read the newspaper every day, and step round to the ballot-box once a year—and she has not?”

Takedown: “No doubt they are, often enough. As the old lady says in a late English novel, ‘God Almighty made some of them foolish, to match the men.’ . . . But it is the theory of democracy that every man has a right to express his own folly at the ballot-box . . . And why not every woman too?”

But man. We can't lie. It’s really depressing that these deeply mysognystic, erroneous and downright insulting arguments continue to be trotted out in discussions about whether women should be leaders, whether they can adequately do math and science, and in the ever-growing tension between motherhood and careerism.

So we're keeping our eyes on the horizon. Here’s to a world of tomorrow where suffragists’ ideas are taken to their logical extent: recognition that we’re all humans, and can’t be defined by our reproductive organs.

(Although that's too bad because if our sheer vaginal strength is any testament to our tenacity and willpower to get. it. done. than maybe posessing a snatch should be a political prerequisite.)

If you like this article, please share it! Your clicks keep us alive!
Tags
suffrage
feminism
vote
sexism
history