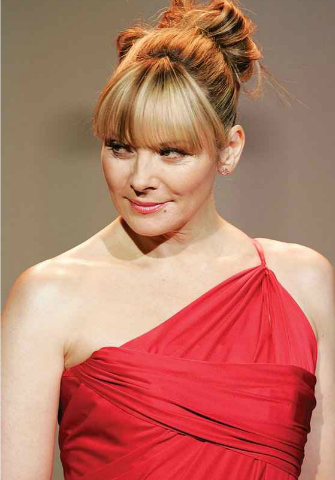 Women’s History Month is a great time to honor all of the fabulous women who came before us. You know, Harriet Tubman, Elizabeth Cady Stanton, Amelia Earhart, Rosie the Riveter, and my personal fave: Samantha f*cking Jones.

Not familiar? No worries — I am more than happy to sing the praises of the best woman on Sex in the City, and possibly the best female fictional character of all time. There were four women on the show (and in the movies):

Carrie: the glue who held the group together. Also a raging narcissistic b*tch.

Charlotte: the polished, athletic, ladylike chick of the group who consistently had the best facial expressions. Her main flaw was that she was a bit whiney.

Miranda: the hilariously cynical lawyer friend. Sometimes, a bit too harsh though.

If I worried about what every bitch in New York was saying about me, I’d never leave the house.

2.) Her Loyalty
Samantha is the best friend of them all. When Carrie got her diaphragm stuck inside her vag, Samantha offered to help pull it out. Samantha isn’t afraid to make sacrifices to help her friends either — like the time she booked a haircut at a super exclusive salon, but then gave her spot away to Miranda and babysits Miranda’s infant son instead. Speaking of sacrifices, remember how Samantha helped Charlotte’s brother get out of a bad relationship (in her, errr, unconventional way)?

3.) Her Ambition
Then there’s the fact that Samantha is fierce and super career driven. Though critics complain that the show portrays PR work as far more glamorous than it actually is, fans can’t deny the hard work Samantha put in over the years to rise in the ranks.

4.) Her Sex Drive
Plus, there’s, hello, the men! She loves sex and isn’t afraid to let her freak flag fly in the face of patriarchal America. Good for her! Samantha is honest with herself and her men — when she isn’t happy and wants to move on, she does. Grinning and baring it just isn’t for her.

5.) Her Fearlessness
Then there’s the biggest and best moment of all. Samantha had breast cancer, but she braved it beautifully. At a cancer benefit one day, Samantha stands up ready to give her speech and does something shocking: she removes her wig (it was making her hot) and reveals her bald head. Another woman stands up and does the same. Then another. (I'm getting weepy just thinking about it!) The crowd cheers and cries. Cancer survivors around the world jumped for joy and applauded the show for displaying the “ugliness” of the disease rather than “putting a pink bow on it.”

People are quick to judge Samantha’s character because of her promiscuity, but realistically she is someone we all should admire. Her courageousness and drive are admirable, but it’s her solidarity with her lady tribe that really tugs at the heart. I think we could all benefit from having a friend like that. In honor of Women’s History Month, we salute you Samantha Jones.