Genderbender: Judaism, Christianity and Islam Reveal Their Queer Side 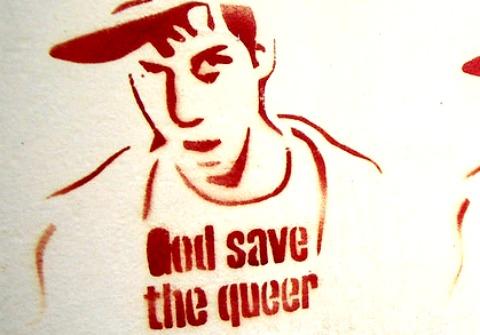 It's not too often we look to religion as a model of progressive ideals, especially in regards in gender. Like many feminists, a visceral shudder goes through my body when I think of being born into a Hasidic Jewish family, being married to a fundamentalist Muslim, or a devout bible-beating Catholic. I guess I've always felt that women — in the name of God, Hashem, Allah and countless other permutations of finger wagging omniscients — are suffering at the hand of sanctioned misogyny. Whether in the name of faith, devotion, or a profound commitment to familial and socio-cultural traditions, females are getting the sh*tty end of the life stick.

But in a kind of cosmic irony, I was reminded of two facets of religion-based gender-bending this week — Purim and Albanian burrneshas — which belie their own religious rigidity and generally throw a f*cking wrench into the whole operation.

So first things first: In the 15th century an Albanian prince, Leke Dukagjini, wrote up a secular set of laws that applied to Christians and Muslims called The Kanun, which basically set the standards for "interpersonal conduct" among its brethren. Not surprisingly, women were largely considered the property of their fathers and husbands, bartered as needed, and basically lived under lock and key. But here's where things get interesting. Unlike other subsidiary secular laws of religion, The Kanun offered a strange loophole for women who had no interest in participating in the down-with-the-sistah system.

Enter the burrneshas — meaning "he-she" and/or "sworn virgins." Women who decide — and yes, are sometimes forced — to take this burrneshas oath, get to perform music, drink, smoke, carry a gun and — hell yeah! — wear a watch. And this isn't just aesthetic bullsh*t. This is about actually becoming a man in every. sense. of. the. word. (Other than God descending and granting them a penis.) Burrneshas function as men in Albanian society as if they born to that gender; other men also accept these burrneshas as peers, as other men; there is no stigma and little differentiation between them other than having s.e.x.

Women who take the oath are also able to own property, drink, smoke, carry a gun, and perform music. The other men in the community accept these de jure males as biological ones, as burrneshas are welcome to socialize with other men as if they were born that way. Historically, Burrneshas originally served as a clever means of bypassing a cruel fate; if there were no longer any males in a particular family to pass along property, a virgin daughter could assume the patriarchal role by banishing sex forever.

By this declaration, the burrnesha secured the family estate—and honor, a social construct and selfless act to protect the family. — Michael Paterniti, GQ

According to anthropologists, there could be as few as 30 and as many as 100 Albanian burrneshas left on earth; what's strange however is the realm in which these "he-shes" live. While Albania doesn't have an "official religion," the country is basically broken down into 30% Christian and 70% Muslim and all very conservative. Tirana held its first-ever gay pride parade this past Spring to which the deputy minister of defense Ekrem Spahiu spewed:

What remains to be done is to beat them up with a stick. If you don't understand this, I can explain it: to beat them with a rubber stick.

And yet their culture openly permits glorified cross-dressing and a transgender life; perhaps the burrneshas have been caught in the cross-hairs of tradition and culture, of progress and discrimination. It is out of obligation that they've assumed this role, not because of a queer identity; by definition their situation could be viewed as highly oppressive. While many Albanians aren't even aware the burrneshas still exist, those that do are conflicted about their presence, not because they represent a gender anomaly, but because they are perhaps relics of the past better left behind in the wake of progression.

When it came to the burrneshas, no, it wasn't right to exist in this in-between; everyone should live as their sex—and not in this sort of confusion and loneliness. [Local Albanian] Ermal was glad that the burrneshas were nearing extinction, glad for the burrneshas themselves especially.  — Michael Paterniti, GQ

But what's more complicated still is that for those women who chose this life not for their family or for passin' down the patriarchal booty — but for their own personal reasons — the end of the burrneshas could mean an end to a gender-swap that otherwise would cause social ostracization.

Purim is celebrated annually according to the Hebrew calendar on March 14th; it's basically a Jewish victory dance over their dastardly enemies as depicted in the Book of Esther, which is widely considered the most subversive — and feminist! — book of the biblical canon, actively calling into question conventional sexuality and gender roles.

Here's the story: The Book of Esther opens up with King Ahasuerus throwin' a six-month drinking feast (as one does) for the army of Persia and Media. And in one of the most drunken sh*thead misogynistic moves of all time, he asks his wife Vashti to strip down and parade around naked (wearing only her crown) to showcase how smokin' hot she is for the troops. She refuses, and of course, Ahasuerus has her executed for her no-tits! temerity.

Although feminism has won many women in the western world a greater degree of freedom, the feminine is still largely subservient to the masculine, and its life-giving ability is treated as a commodity to be acquired and guarded, rather than honored and loved. In a typically radical twist, the Talmudic sage Reish Lakish depicts God, the Creator of the universe, asking for forgiveness for this state of affairs, and asking us humans to offer a sacrifice, to atone for His sin of making it so (Talmud Bavli, Chullin 60b). — Daniel Raphael SIlbevrstein, The Jurusalem Post

Ahasuerus chooses Esther as his new wife, but (sucker!) he doesn't realize she's Jewish and she ain't about to reveal her origins. Meanwhile her uncle Mordecai (who's also Jewish) refuses to bow to Haman (one of the King's head minions). And because this is the Bible we get some good 'ol fashioned biblical rage: instead of just killing Mordecai, he says he's gonna kill the entire Jewish population in their entire empire. Ahasuerus OKs Haman's pending genocide and then heads off to bed but he can't sleep (aw!) so someone reads him the daily record of the court and discovers that Mordecai helped thwart a plot against his life. Soon after Esther reveals that she too is Jewish and thus will die at Haman's hands as well so Ahasuerus hangs Haman instead. (Ha!)

But alas! Bureaucracy is a real b*tch and the decree against the Jewish people that Haman set into motion simply can't be revoked. Ahasuerus does allow Mordecai and Esther to write an additional decree however; anything they wish. And like the crazy-smart Jewish foxes they are, they create a decree that allows any Jews to preemptively kill anyone who poses their people a threat. And guess what? Those badasses went all This Is Sparta! on their ass and slaughtered 75,000 Jewish enemies but no spoils are taken. (Because that's not honorable.)

So yeah, that's the story of Purim. Wily little bitch that Esther! And in the retelling and re-exploration of her biblical bad-assery, every convention-bucker has reappropriated Purim as an all out gender-bender bonanza of debauchery-soaked bliss:

My experience of Purim as an opportunity for boundary-crossing transgression is nothing new; in fact it’s a very old tradition.The oldest surviving text of Yiddish Purim parody-plays (called Purimspiels) is a manuscript from 1697 known as the “Achashverosh-shpiel,” a play considered so vulgar at the time that it was burned by the government of Frankfort, Germany. In 1728, the government of Hamburg banned the performance of Purimspiels entirely.

Today, purimspiels are common in yeshivas and religious communities. But the celebrations have also been reclaimed in recent years by Jewish feminists, queers, and progressives of all types, in part because of the possible feminist readings of the story and in part because of the topsy-turvy carnivalesque nature of some Purim traditions. These groups, marginalized by the mainstream Jewish community, are building on the rich history of Purim theater to create powerful spectacles and performances that critique, amplify, and challenge the politics of our times, the Jewish community, and the Megillah’s story itself. — John Propper, Zeek.com

Cross-dressing, (for gaity or simha that is) is hilarious and ineffably fun — and honestly what's a better way to booya! your enemies than by donning a mustache, some suspenders and quaffing six stiff cocktails.