Pressing Questions Answered: Why do Women Go to the Bathroom Together? 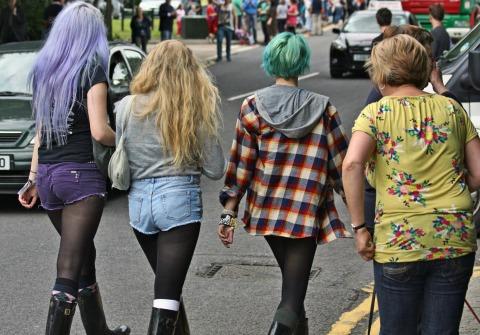 At some time in his life every man will wonder:

“Why do women make group trips to the bathroom?”

We never have a good answer, do we? Sometimes it’s to talk about the guys we’re with (sorry not sorry), but sometimes we do it with women we don’t know or like. Actually, we kind of travel in packs all the time. What’s with that?

We looked at some experts’ theories about femininity and the power of groups to find an answer. Here's what we dug up:

Let’s start with the granddaddy of psychology: Sigmund Freud. Now, he was relatively progressive for his time (dude was born in the Victorian era), but his views were, ahem, different from modern theories. Ultimately, Freud believed that women were limited by their sex. According to him, we have never gotten over the fact that we don't have penises. That we lack this tool makes us weaker and scared.

Don’t get mad . . . he was from a different time. And at least he admitted that women have a sex drive.

In 2014, we’re less inclined to believe that women want penises. However, the vulnerability that Freud discusses hits a bit close to home.

Now, Alfred Kinsey, the granddaddy of sex research, believed that women possessed intrinsic shame. The thinking was that we’re sexual beings, but we’re ashamed to show it.

And when considering the Madonna/whore dichotomy, whose mighty force assaulted pop culture last year, Kinsey’s claim is more applicable today. Modern women innately understand that there’s a fine line between “prude” and “raging slutb*tch,” and that it’s impossible to remain in one category all the time. This makes it supremely challenging for women—especially younger women—to find (and support) their true sexual identity.

It doesn't help that both men and women’s magazines are filled with photos of deliriously beautiful women, like all the time. In this discussion, female hotties gracing glossy pages isn't what's challenging for women (though the unrealistic standards of beauty on those pages are questionable, indeed). What’s challenging is that women don’t hold enough positions of power in the U.S. There are very few female CEOs and I don’t even need to tell you that we’ve never had a female president (not yet, anyway). Hell, it wasn’t even until the 1980s that we got a female Supreme Court Justice (thanks Sandra Day O’Connor). It's getting better, but we can't deny the present and past.

Given these circumstances, it’s totally understandable that we move in packs. Before the bathroom group even forms all the women in the room have already connected in an unspoken bond for no other reason than they all have vaginas. Think of the only three girls at happy hour. Or the only two women on the co-ed soccer team. Traveling in a group gives us strength and helps us feel protected—we’re less vulnerable in larger numbers. On some level, we’re aware that we’re vulnerable in this big bad world. And if the odds are stacked against us like this, we’re going to stick together. We won't miss an opportunity to bond—even if it’s just on a field trip to the bathroom.

(It doesn't hurt that most women’s restrooms have couches and butlers.)

If you like this article, please share it! Your clicks keep us alive!
Tags
Friendship
best friends
Love
Freud
Kinsey
group theory
girlfriends