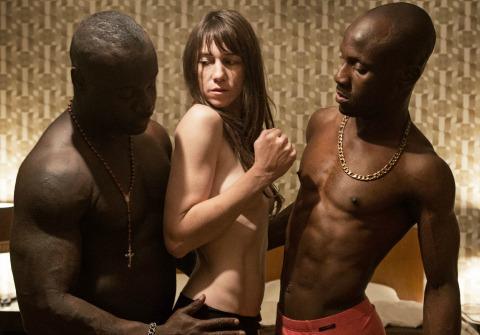 In a gesture of supreme kindness, NYC-based Landmark Theaters has opened its doors to parents (and nannies and other sundry caregivers) and their babies on Wednesday afternoons. Yes, one day a week, baby watchers can bring their Elmo-melted brains and their wee charges to the theater for a couple hours of adult entertainment. Rattle & Reel, as it's called, allows adults to enjoy the movies without hiring a babysitter or enduring nasty looks from other film goers. Adults have to pay full price—babes are free—but can you really put a price on a grown-up good time?

Everything was fine and good until the twisted brainiacs behind the theater chose Lars von Trier's "Nymphomaniac" as the Wednesday afternoon feature. The Little Mermaid, this is not.

Parents are freaking out about the massive amount of lewd sex that occurs in the film. Understandably so—the film would be NC-17 . . . if it were rated. That's the same rating as uber-disturbing Requiem for a Dream.

Babies are impressionable, vulnerable little creatures, and while the tykes won't remember a frame of what flickered across the screen on that fateful Wednesday afternoon (studies say children don't form actual memories until two years old) babies do imitate things much much younger than that. (Like 6 months.) And the idea of monkey-see monkey-do in this case is downright disturbing.

Early on, baby eyes go through many changes and research suggests that their rapidly growing brains are also limited in what they can perceive. Chances are pretty good that they wouldn't understand—or even notice—an explicit sex scene flashing above them. And happily, even if they were alert, an infant wouldn't have too much to say about the ol' von Trier freak fest. They'd just try and hump the dog perhaps.

Sidenote: When we called the theater to find out exactly what "baby" meant (i.e. are they letting 3-year-olds bask in bouncing breasts) and the gentlemen at the box office told me: "Basically, a baby is anyone who can't sit by themselves in a chair." Wow.

So basically. What. the. f*ck. humanity. Who's decision what this?! And are we to assume that parents are flocking in with their footed-jammied flock otherwise they never would have offered this hardcore afternoon delight to begin with?!

Here at Ravishly we collectively shake our heads. I wonder if those parents spent the whole screening imagining the warping of their offspring's psyche and calculating their child's future therapy bills?

Image: She's up all night to get lucky. Courtesy of Magnolia Pictures