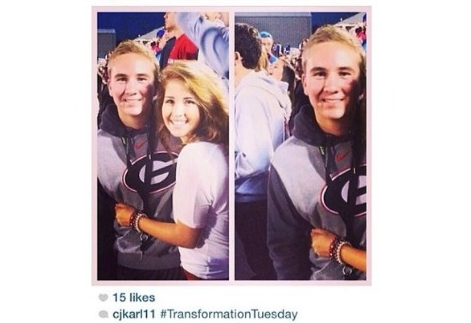 The web is a'buzzing with recent social media documents (HA!) proving that a high school dude dumped his girlfriend through a hashtag and Instragram picture.

Seriously! Apparently, Georgia teen known as cjkarl11 posted a picture using the hashtag #TransformationTuesday (typically used as a before and after 'ehmigawwd, look how great I look now' tool). The image was made up of two pictures. The left showed him snuggled up with a girlfriend, but the right took the same picture and cropped out the poor girl.

Then, the young lady, user name syd_ross, commented: "is this your way of breaking up with me?" But wait, the social media drama continued! On Twitter, the newly axed girlfriend (this time under the user name merediththacker) tweeted about gaining 30 new follow requests. Also, she included her (supposed) ex in the tweet.

Jerk ex boyfriend then bragged about reaching 3,000. Is this the lamest breakup ever, or a ploy to get attention? Nancy Drew time!

First of all, merediththacker isn't showing much anger on Twitter. Pretty sure most of us would be shooting daggers with words on this one, but instead she seems to be laughing:

Also, chick has, like, 1,017 followers but only follows 504 users. That's a pretty good ratio for a normal high school student. She likely acquired many through this incident. This is looking fishy . . .

@BrerRabid I wasn't the girl... and it was a joke anyways!

So, it was a joke anyway. On behalf of everyone who has ever been dumepd (so, like, 90% of the human race), we're thanking our lucky stars that this is just a hoax. Yay humanity! At least, for now.