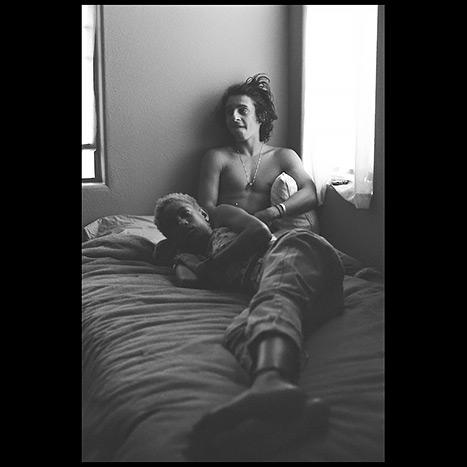 Maybe it's because I'm nearing 30 and, therefore, becoming a stick-in-the-mud prude. But when I heard about a photo making the rounds of 13-year-old "Whip my Hair" Hollywood royalty Willow Smith kicking it in bed with shirtless 20-year-old actor Moisés Arias, my tsk-tsk radar went off.

My ire, however, was directed at the 20-year-old man...not the 13-year-old girl. Too bad the same can't be said of the rest of the Intrawebs.

As tends to happen in cases where younger women get caught up with older men (side note: there's no proof Willow is actually with this guy, and it's since been taken off Arias' Instagram page), people tend to direct their scorn at the young lady caught up in the affair. Recent case in point: when Kristen Stewart was caught macking on her colleague Rupert Sanders, people dumped on her, not him....even though he was not only older, but married.

Well lo and behold, the same thing's happening here. Reactions to the controversy in comments sections include:

There's Daddy's Little Girl, doing her part to keep her family in the media without actually producing anything worthwhile...

Just disgusting. This is what happens with unbridled nepotism.

What do you expect when your parents are never home and they treat their kids like little royalty where they don't have to work for anything. Glad these aren't my kids because this little idiot will end up on drugs and rehab before she turns 18. Good job "mom" and "dad."

13yo with a belly button piercing, laying in bed with a 20yo man? Willow Smith, you need to go live with your auntie and uncle in Bel Air.

OK, the last one's kind of awesome, but you get the idea. It's not the elder maybe-paramour who's to blame for these inappropriate shenanigans, but the barely teenaged girl who's acting like a corrupted hussy!