Yes, They Get It Too: Men and Breast Cancer 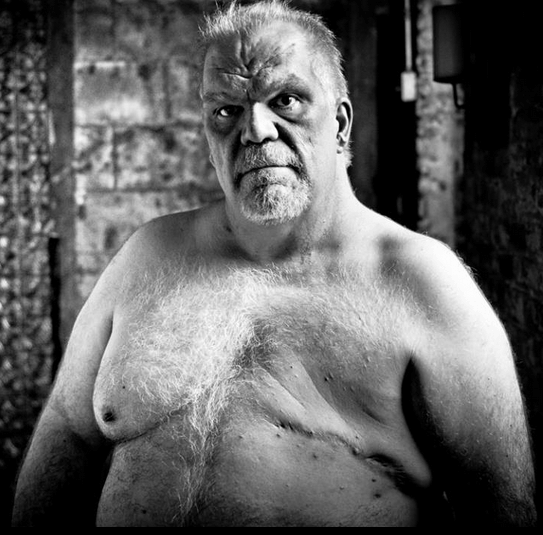 It may be a man's world chock full of old white dudes running the planet, but our male brethren have recently revealed a newfound vulnerability — breast cancer—getting a sorrowful glimpse into how the other half lives. And dies. And struggles. And survives.

New York-based photographer David Jay has exposed another harrowing chapter of humanity's ongoing battle against insidious cells with The SCAR Project: Male Breast Cancer, a harrowing but hopeful sidebar to his continuing Scar Project, a searing collection of black-and-white portraits capturing the battle against breast cancer.

Cancer biologist, Dr. Oliver Bogler, was diagnosed with breast cancer 18 months ago when he noticed a small lump in his chest. In frantically combing through the internet in the hopes of learning more about a relatively elusive manifestation of a much-talked about disease, he stumbled across The Scar Project and reached out to Jay about the possible inclusion of males in the series.

Dr. Bogler explains that while many cancers are indeed gender-specific and ravage either men or women (like uterine, ovarian, prostate, and testicular cancers) it turns out that breast cancer ain't that picky; it's really under the same category as lung or colon cancer.

While it's still unclear why some get breast cancer and some don't — the duct tissues in anyone's "breast" can become cancerous — risk factors include classic-ly bad sh*t like radiation exposure, inherited gene mutations, obesity, and of course a family history of breast cancer.

Fewer than 1 percent of breast cancers are diagnosed in men, but that is little comfort to the 2,400 men a year who learn they have the disease. — Tara Parker-Pope, New York Times

And that ain't all folks! A recent study published by PLOS one (researched by a bevy of John Hopkins doctors) explores the connection between the much-dreaded HPV (the human papillomavirus) and sexual activity. And while 90% of all young adults (blech!) will contract the virus and banish it within two years (according to the CDC), 63% of the estimated 11,726 cases of throat cancers are believed to be caused by it.

The study — which surveyed 4,000 people — explored oral sex behaviors by gender, race and age and discovered that those who love goin' downtown have higher rates of HPV, and thus higher risk for throat cancer.

But what's this got to do with the men-folk Katie?

Maybe a man's world is rougher than we thought.