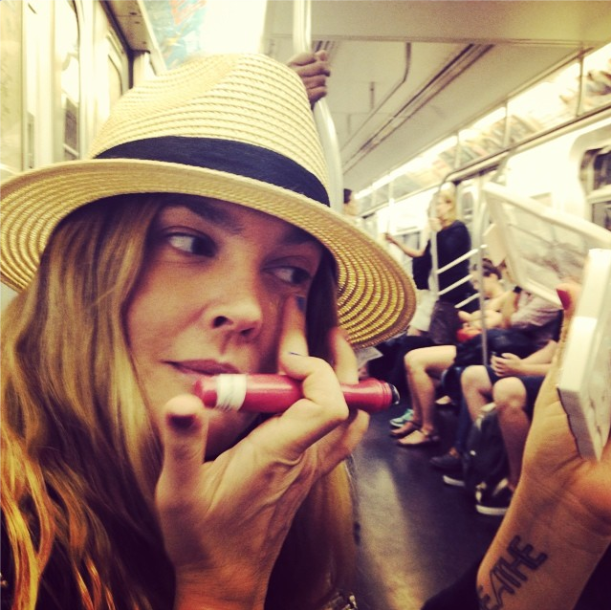 Yesterday, the world’s favorite free spirit, Drew Barrymore, posted a rather disturbing picture to her Instagram feed. It showed her riding the New York City subway while applying some under eye concealer. The caption read:

“Concealing on the subway! With a @flowerbeauty tester roller ball concealer that comes out January 2015 @walmart #commuterbeauty”

Drew, I get that you have a beauty line to promote, but ew. Don’t do your make-up on the subway!

Listen, I know she’s not the first woman to do this—in fact when I used to live in NYC and ride the subway on the regular, seeing a woman balance a compact on her lap as she carefully applied mascara through the subway twists and turns was pretty much a daily occurrence—but ew. I get it, it’s called multi-tasking. Women think they can get five more minutes of sleep and use their commute to beautify. But this practice is gross, and quite frankly, it’s bad manners.

Why is it gross, you ask? Because think about all of the things your fingers have to touch to get on the subway—the turnstyle, the metrocard dispenser; maybe you hold one of those annoying emergency beep-blaring doors open for a woman with a stroller. Maybe you couldn’t get a seat right away, so you hold onto the center bar (which has definitely seen sneezy hands, pizza fingers and butt cracks). Unless you are deep cleaning your hands before you apply make-up, this is gross! You are rubbing the subway germs all over your face!

Truthfully, we're gonna go ahead and say it: this is also bad manners. Make-up application falls underneath the category of personal hygiene, a.k.a things you do in the privacy of your bathroom or bedroom—a.k.a private places—so putting it on in the subway, a very public place, is just poor etiquette.

This category of poor subway etiquette also includes, but is not limited to: tending to split ends, plucking your eyebrows and filing or painting your nails (all things I have seen be committed by women on the subway).

Ladies, I know you’re busy, but do your private things in private. And while we’re on the subject of subway weirdness, never eat on the subway either. That shit's gross too.