Why Are Wedding Dresses the Latest Trend Among Chinese College Grads? 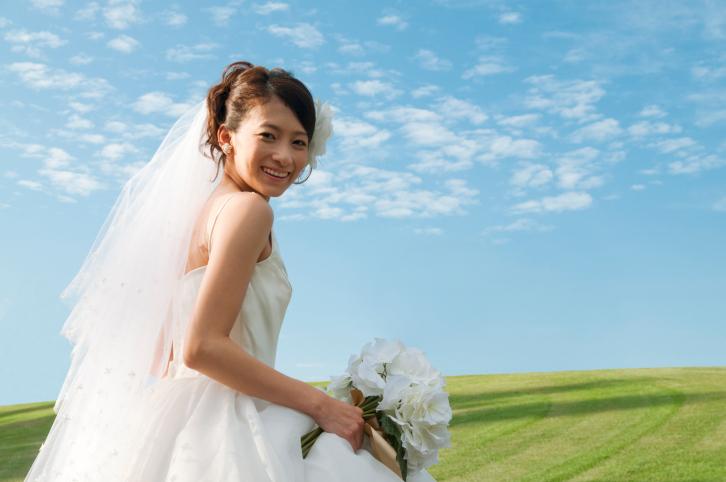 Women in China are taking advantage of the strides they’ve made in society (more or less), and many flock to universities to pursue education. Empowered with their diplomas in hand, graduates are set to head off into the workforce. And what do these young, modern women wear to commemorate their professional achievement? Why, wedding dresses of course.

No, they aren’t getting married. Rather, many Chinese women are renting wedding dresses simply for their graduation pictures. And yes, this is disturbing on various levels.

Here's how some graduates have explained their decision to spurn caps and gowns to opt for the blushing bride look:

[The wedding dress] represents that our youth is fading.

Yikes. I assume this is in reference to the post-school stress many young adults face in China. A little reality-check yin to the happy graduation yang?

You might wonder how this creepy bride clone phenomenon sprung up at university graduations.  It turns out that Chinese graduation ceremonies haven’t been big deals historically. Schools don’t line up big-name figures to speak, parents rarely bother showing up and the whole thing is a generally dry and perfunctory affair.

So in the absence of fulfilling tradition, young students have taken matters into their own hands with novel trends—starting with photo shoots that allow graduates to upload their self-images to social media and compete with their peers for the hottest looks. But wedding dresses specifically?

Perhaps since the wear of western-style white dresses for a wedding is a relatively recent occurrence in China, the population doesn’t have such a firm association with these dresses serving only the function of exchanging vows (or posing for the red carpet). In fact, in China white is traditionally a color for mourning, associated with death. But many young people are so over the white taboo. Said one happy graduate, "The feeling of wearing white is very elegant, like a nymph.”

The wedding dress as graduation gown is so ubiquitous that some male students jokingly take photos clad in bride-esque get-ups themselves. Some of the female graduates also inject some humor into wedding-style shoots by using props like fake mustaches or soccer balls.

But others simply double-down on the Miss Havisham routine, posing with tiaras or veils, renting dresses with lacy trains and even tossing bouquets in the air for the camera. Now that’s truly going the extra mile in feminine creep.

All of which makes it appear that a component of this craze simply involves extending the wedding day fetish to other achievements in life, which is hard not to see as flat-out weird. From Western eyes, it seems to project the idea that a woman’s personal achievements should be celebrated simply as mimicry of the only true success: landing a man.

The Chinese Way of Life

But there is likely more to this story of matrimonial play-pretend. China has a more traumatic history of marriage commemoration than exists in the Western experience. Traditionally, brides were often hardily hazed on the day of their weddings, and many mourned being forced to leave their parents’ home to take up with a virtual stranger—and his critical mother. This history may inform the sentiment conveyed by one group of female graduates who had been together for all seven years of their higher education. When asked about wearing wedding dresses to commemorate their graduation, they said they couldn’t help but weep since they felt like they were “leaving home and getting married.”

Indeed, a more charitable view at the phenomenon has to acknowledge that the Chinese educational system puts intensive pressure on students, without much in the way of accolades for their achievements. And then comes the often-harsh reality of working life: major competition for jobs, crowding into tiny apartments with roommates to save money, and the typical single-child onus of providing for aging parents.

So if students turn to wacky means to celebrate it themselves, at least they are recognizing their own work and embracing levity (and cathartic mourning!) in what can be a hyper-competitive and draining work environment.

If you like this article, please share it! Your clicks keep us alive!
Tags
china
graduates
wedding
dresses
white
jobs
beauty
education
modern