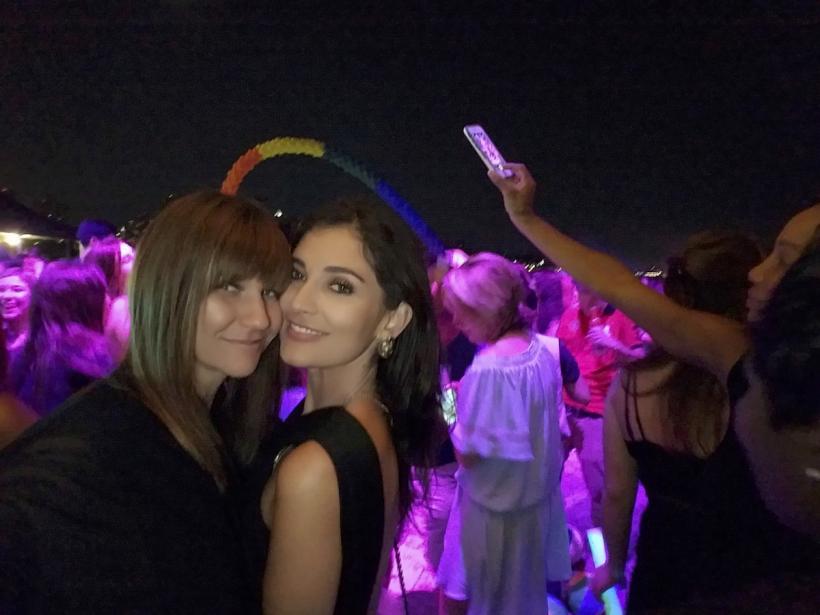 (Photo courtesy of the author.)

I’ve always envisioned myself getting married on a beach somewhere really remote and exotic — Fiji perhaps — with zero guests in attendance, just me and my foxy-lover exchanging wildly intimate vows as a flaming orange sun sets against a brilliant blue sky. In my mind’s eye, I saw myself as the low-fuss “cool-girl” bride, clad in a cream-colored string bikini with salt-water waves recklessly cascading down the center of my perfectly bronzed back. There would be no makeup adhered to my skin. I would be fresh-faced — glowing from within. My wedding would be simple, private and understatedly chic.

Gah! What a ludicrous, pretentious, but most of all, delusional fantasy that was! No makeup? A bronzy back? Who the hell do I think I am? I mean, let’s get real: In exactly one month and three days from today, I’m getting married.

When people ask me to describe the vibe of my wedding I say this: “Imagine you went to the most amazing party at the Beverly Hills Hotel in 1974, and it was very GLAM, but someone laced the champagne with just the tiniest bit of acid, so you were convinced that the girl swimming in the pool was an actual mermaid and that the palm trees had diamonds in them.”

And guess what? My wedding is not taking place on a  remote beach in Fiji. It’s taking place in on the oh-so-accessible gulf coast of Florida. It won’t be private, either. It will be a crowded, melodramatic affair teeming with over 150 guests. I won’t be wearing a bikini; I’ll be wearing a f*cking ballgown that glimmers and shimmers and has such an obnoxiously long train my flower girls will have to traipse behind me and carry it as I strut down the aisle to Lana Del Rey crooning a moody love song.

There will be a blue-haired beauty wearing a full-blast mermaid tail swimming in the teal-colored pool. I’ve hired an artist to paint portraits of the guests as they dance to a live band fronted by a sultry Parisian singer. When people ask me to describe the vibe of my wedding I say this: “Imagine you went to the most amazing party at the Beverly Hills Hotel in 1974, and it was very GLAM, but someone laced the champagne with just the tiniest bit of acid, so you were convinced that the girl swimming in the pool was an actual mermaid and that the palm trees had diamonds in them.”

At first, I was rendered pretty embarrassed by my relentless desire to make my wedding so over-the-top, so extra, so glittery.

“I’m so sorry. I understand that this is all so ridiculousthhh.” I slurred to my friends at my bachelorette party this past July on Fire Island. It was 10 AM, and we were all drunk, rocking face jewels and bright red lipstick, even the boys (especially the boys).

“What do you mean? It’s not ridiculous; it’s fantastic!” My best friend Eduardo chirped, filling my glass of sparkling wine to the tippy-top.

I hungrily slurped those sweet, succulent bubbles down like I was going to the electric chair. “I mean, I’ve always thought weddings were so stupid. What a waste of money! It’s not like I accomplished anything profound by getting married. I fell in love. Big deal. It’s just...luck.”

I could feel my spirit deflating like a balloon.

“It’s deeper than that! We’re gays, Zara. It’s important to show the homophobes that not only will us gays get married, but we also won’t do it tamely or quietly! We’ll do it flamboyantly! I think it’s fabulous you’re having such a grand wedding! You’re really sticking it the homophobes!” Eduardo grandly bellowed, his deep voice rich and velvety. He sounded like he was giving an empowering commencement speech at an Ivy League university.

It’s important to show the homophobes that not only do we marry each other, but we also won’t do it tamely or quietly. We’ll do it flamboyantly! His words played back in my inebriated head for the next several minutes.

I suddenly understood why I felt this intense pressure to make my wedding so wildly spectacular — to stick to the homophobes.

When I imagined my simple, understated wedding all those years ago, I hadn’t really thought about how it would feel to be getting married as a queer person. I hadn’t considered how hurtful it would feel to know, intrinsically, that so many people in this world, wholly disapprove of your love.

The moment I got engaged I was met with heaps of unexpected homophobia that poured out of every facet of my life. Hundreds of internet trolls sent me private messages condemning me to hell. I could see the look of blatant disgust on the faces of strangers as my fiancee, and I twirled around the streets, clutching hands in newly-engaged bliss. I began to hold my breath when calling wedding vendors, nervously anticipating the surplus of negative energy tossed in my direction after I revealed I wasn’t marrying a man, but a woman.

Sometimes the hate wasn’t so outward or apparent. Sometimes it lived in the subtle roll of an eye from a “friend” or the condescending chuckle of the saleswoman at a bridal boutique. Sometimes I could just feel the collective disapproval of my lesbian wedding lingering in the air.

Dating a woman is one thing. Marrying one is another. People with “lots of gay friends!” often don’t “believe in gay marriage.” And that painful sting of homophobia I experienced while basking in the purest moment of my life (what is purer than deciding to spend your life with one person?!), I realize now, has catalyzed my primal need to have this wild, colorful, lesbian wedding.

Because you know what? I spent twenty years soaking in a proverbial pool of shame because of my sexual orientation. I did whatever I could to repress my attraction toward women. I drank and popped pills until I couldn’t feel anything, not even my sexuality. I gritted my teeth and left my body all those nights I forced myself to be with men. I starved myself until I was no longer hungry, thinking if I could stifle the impulse to eat, I could stifle the impulse to love women. I lived in hell because I let the homophobes get inside my head and take control of my heart.

But finally, after enduring so much self-destruction and pain, I’ve come out the other side. I’m finally comfortable in this skin. I made it. I’m alive!

I’m not just alive, but wildly in love, and I want to scream how wildly in love of I am from the rooftops of all the small town gay bars in the country. I want so much glitter to be at my wedding that it ascends into the air and drops right on to the hateful heads of every homophobe to ever exist in the world. I want pictures of me kissing my bride (with tongue!) to make their way on to the Facebook feeds of every hater on the vast expanse of the Internet. I want the boys who taunted me in high school — after they found out I kissed a girl (gasp) at that stupid house party — to know they didn’t win. I won.

A gay wedding, I realize, is more than a wedding; it’s a political statement.

It’s a bold display of unabashed encouragement to all the queer kids out there who fear (like I feared) that they will never be happy, that they will always be on the outside, sitting on the sidelines of life. I want my unapologetically BIG wedding, to let them know that they can not only play in the game of life, but they can shine in goddamn that game, too.

Most pressingly, I now understand that a gay wedding is a giant celebration of owning who you truly are, in a world that tells you from the time you’re born, that who you are is wrong. It’s sticking it to the homophobes and claiming yourself finally free from their hateful grip. It’s a ceremony honoring the strongest thing in the world, love.