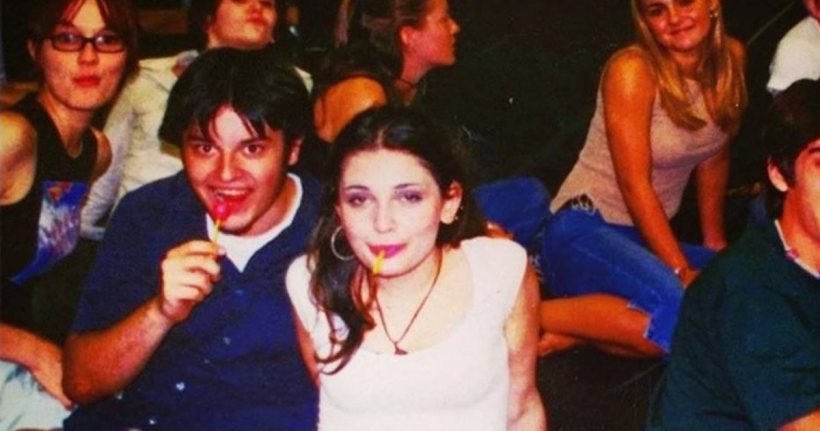 If I were to tell my younger self that I have only one friend from my high school years spent in Westport, Connecticut attending my wedding that’s taking place exactly one month from today, I would’ve been shocked. I was “ride or die” with my friends as a teen. My friends were my blood, my chosen-family, the sole thing that made the horrors of high school (somewhat) survivable.

Maybe it was because Westport was (is) a wildly preppy town, the kind of white-washed suburb where sixteen-year-olds actually chose to wear their tennis whites on the weekend. I wasn’t wildly preppy. I was an alt teen with a lip-ring who smoked clove cigarettes. When you’re an alt teen who worships at the altar of Bikini Kill, and you’re stuck in a school teeming with aspiring prom queens, you passionately long for other alt kids to connect with. And eventually, you all find each other and become a tribe of torn-stockings and band t-shirts, united in your general malaise toward things like the “homecoming dance.”

When my parents uprooted me from Connecticut to Florida my junior year of high school, I was devastated. Heartbroken. I pined after my gothic tribe with the same relentless longing I would pine over unrequited love in my 20s. Being separated from my friends felt like the worst thing that had ever happened to me! I’ll never find friends like this again, I would wail, alone in my room, moist skin and wet eyelashes face-planted into the pillow.

And truthfully, I didn’t find friends like that again. Though we were entangled in these madly romantic friendships for just a few years, our experiences together weigh far heavier on my memory than almost anything else from my past.

There is so much beauty in teenage relationships. You’re figuring out, for the first time, that life is not fair, together. You’re cultivating your core belief system, a belief system that no matter how hard you stray as an adult, its roots will remain living inside of you forever. Even if you grow up and marry a conservative Republican, you’ll never forget the pro-choice position paper you passionately penned in the tenth grade, will you? You’ll always remember how your best friend Mara hooted and hollered, her big blue eyes gleaming with pride when you presented your stance on abortion to your silent, apathetic classmates in fourth-period social studies class. That was the first time you spoke your mind.

High school is basically four years defined by a series of intense firsts, many of which are traumatic and confusing.

Sex. Heartbreak. Blackouts. Figuring out that your parents aren’t untouchable gods but rather flawed human-beings who try and fail constantly. You learn so many hard life lessons, in such an abrupt span of time when you’re a teen. And nothing will bond quite like going through it, for the first time, side by side, in imperfect unison.

I stayed close with my high school friends after moving to Florida. We would stay up all night, gabbing on the phone, I often drifted off into sleep with a plastic receiver pressed against my cheek (no wonder I had acne).  We even remained close after high school and ended up all moving to New York City at the same time — vomiting on Mcdougal Street, sharing drunken taxi rides to our shoebox-sized apartments, and crying over cigarettes about how we were never going to find the right job.

And then, I moved to London and realized I was gay.

I had always known, really; I had just tucked my lesbian-ness away deep inside of myself and played the role of the “boy-eating-seductress” I’d been cast in. But when you move to another country, you’re finally written out of the movie you’ve been acting in your whole life. You’re air-dropped into a new movie, and you get to be an entirely different character in this story.

So who will you be? No one knows you, so *you* get to decide. You begin to look at your life and most jarringly, yourself, with a fresh set of eyes. You’re suddenly free to evolve! And in my evolution, I realized, that I never wanted to be intimate with a man again. Ever. I was a lesbian.

I fell in love with a girl, and everything changed.

“I’m in love...with a girl!” I nervously wrote my best friends via Facebook. They weren’t angry, but I felt almost instantly, a brick wall build itself, dividing the small space that existed between us.

I began to meet more gay people. And the more gay people I met, the more myself I became. I transformed from the chainsmoking, journal-writing, sad twenty-something into a loud, flamboyant, over-the-top, Zara. I started hanging out in glittery queer clubs and became a regular on the drag scene. My new friends let me explore this wild, fun, extravagant part of myself, without ever bringing up the girl I had been in high school. They didn’t know her. And it was liberating.

When I did see my high school friends after I came out, it felt strange and unfamiliar. Had they always been so buttoned-up? They now had “adult” careers as lawyers and teachers, and almost all of them were engaged.

My new life was so vastly different from theirs. All of my new friends were artists! We all deemed it ludicrous to be engaged before the age of 30 and instead channeled our energy into living the most colorful, beautiful, lives possible. My new friends were characters with big opinions they weren’t afraid to loudly express, they all had crazy senses of style and had loads of shameless sex in which they spoke about enthusiastically in public. 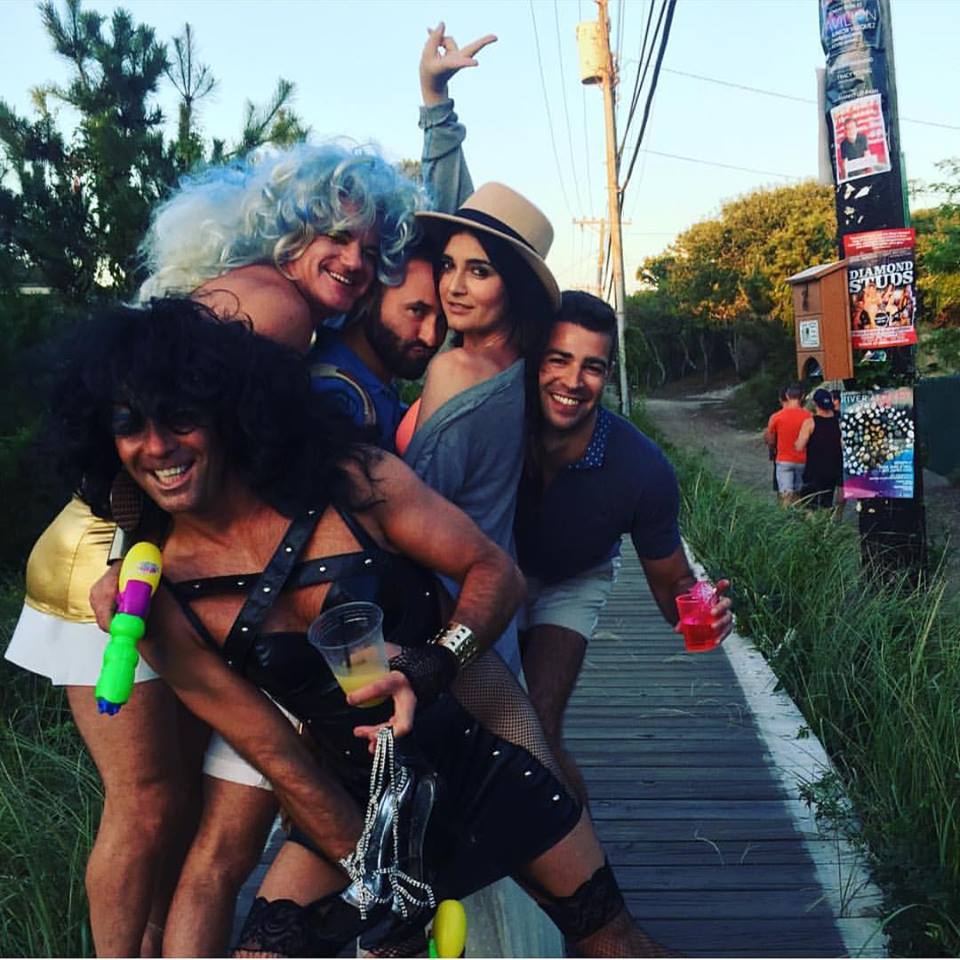 When I hung out with my high school friends, I suddenly became self-conscious over how loud I had become. I suddenly became hyper-aware of how crazy my life was. Most of all, they held up a mirror to how fucking queer I was. Oh, that’s right. It’s not “normal” in your world for a boy to wear a dress. How could I have forgotten?

I believe that our sexuality exists at the very core of who we are. When you repress and stifle your sexuality, you’re repressing and stifling the rawest, most authentic part of yourself. And when you finally embrace your sexuality, so many other facets of your personality can rise to the surface. Coming out is like opening up Pandora’s Box. You truly become the person you were meant to be. And as I grew into the person I was meant to be, it became increasingly apparent that I no longer had anything in common with my old friends.

This realization entered me devastated. It’s not in my nature to give up on relationships. Once I let you into my orbit, I can’t just release you into the open air.

But for whatever reason, I decided to free my high school friends from the shackles of codependency and let them go their way while I went my way.

I suppose it’s because I want to keep them pure, safely tucked away in the cozy folds of my memory. I want to remember Leo* as the cutie in the Slipknot shirt who had the same wild love for both literature and black metal as I did. I want to remember Lindsay* as the gorgeously sensitive creature who sobbed whenever I sobbed, out of fierce solidarity. I want to remember Matt* as the only boy who ever really truly loved and understood and appreciated the weird sketches I doodled all over my notebooks.

And that’s why none of them are invited to my wedding.

I mulled over it for a few weeks. I shared so much with these people, shouldn’t they see me off into the next important stage of my life? But then I envisioned them as stiff and uncomfortable guests, wearing ties in lieu of teenage ripped up jeans, making nervous small-talk with my new tribe of glittery gays. And that vision makes me depressed. I don’t want to see any of my high school friends in adult clothes! I want to keep us all hyper-expressive and awkward and pierced and acne-ridden and teenage in my mind’s eye. I don’t want to tarnish those gloriously special memories I cherish so deeply, by dragging the mundane baggage of adulthood into the scene.

I’ve come to accept that sometimes growing up means growing apart. And letting go of something that was once your lifeline forces you to swim on your own. And when you’re on your own, you explore new things. When you crawl out of your safety net, you now have room for newer, bigger things.

So high school friends you might not be invited to my lesbian wedding, but you’re forever burned into my brain. I felt things for the first time with you, and so you’ll forever be connected to the visceral, feelings of love, sadness, and loss. They are feelings that will continue to pop up at the most significant, pivotal moments of my life. Every time I’m heartbroken as an adult, I think of what you said to me when I was feeling heartbreak for the first time as a teen. So I guess, in a way you live in me, still. Maybe you will forever. And maybe that’s more significant than any wedding invite could ever be.

If you like this article, please share it! Your clicks keep us alive!
Tags
high school
high school friends
lesbian wedding
LGBTQ