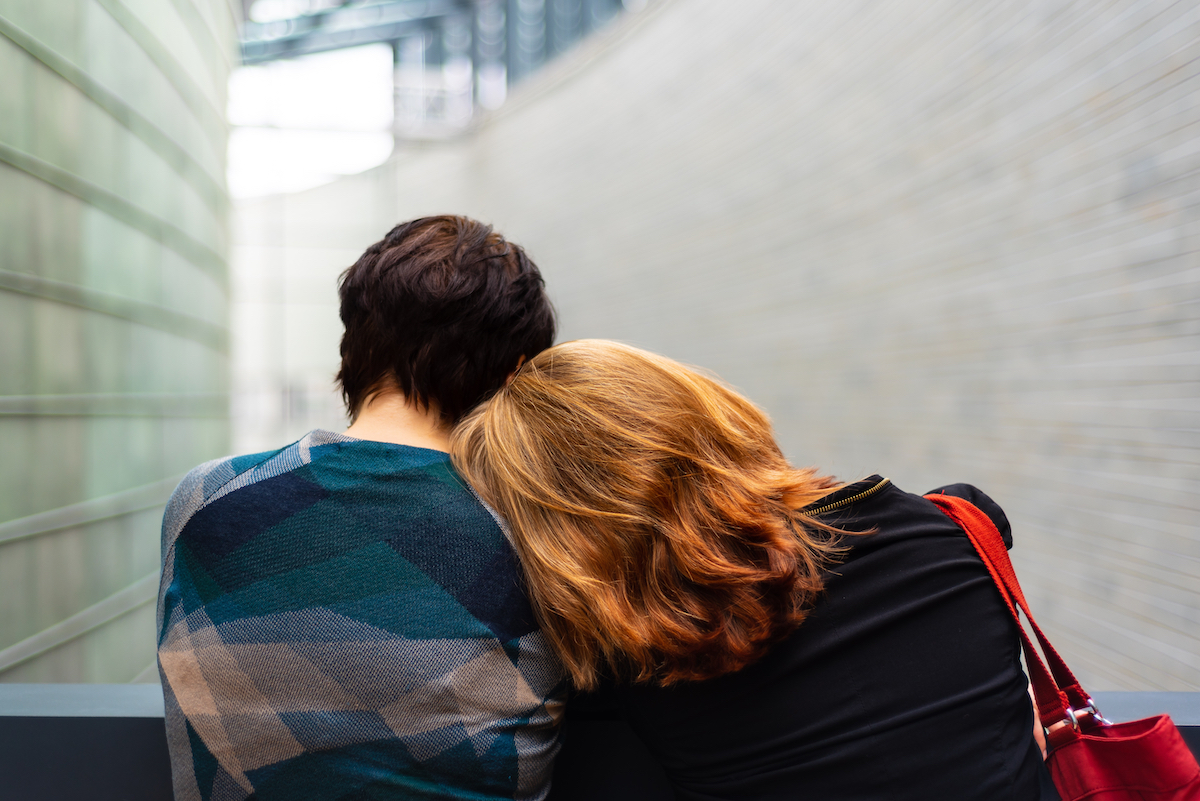 I was a band geek in high school. In exchange for the Saturdays we spent at various competitions all over the state, we would get an occasional “down” day to watch a movie or just hang out in the band room. These were lazy days filled with giggles and gossip, and on one day in particular, kisses with my friend Jessica.

Jessica was cute and kind and one year younger than me. “I don’t see anything wrong when girls kiss girls,” she said as we sat cross-legged on the tile floor: something that you’re never supposed to think let alone say out loud in a small conservative town. “Neither do I!” I agreed. And there it was – a smooch!

But kids are not always kind. After we drew apart, we realized that many pairs of eyes were on us. The jeers started almost immediately. Half of them were cries of disgust. The other half were chants to “just make out already,” “get it on,” or do various sexual things for their amusement. I felt tears in my eyes, but Jessica’s face was tight with resolve. “Here,” our friend Jack said, getting out his digital camera and gesturing for us to scoot together. “If you want, kiss again and I’ll snap a picture for you. That way, you can remember this forever instead of those assholes laughing.”

The first time I kissed another girl is something that, unfortunately, I will always associate with scorn because it took place in a very public, very conservative setting.

It got you teased and bullied; it made you a target for humiliating rumors and cruel exposure. My best friend, who had written about his feelings for other boys in an online journal that only I knew about, ran to me in tears on the day it was leaked to our entire grade.

“It won’t always be like this,” I remember saying to him. “It will get better.”

In 2019, we are coming to understand that some things get worse before they get better.

On May 30, two women were brutally attacked on a London bus specifically because they were romantic partners.

One of the women, Melania, wrote a detailed account of the assault on Facebook accompanied by a photo of her with her partner, Chris, bleeding all over the seat. A group of four men had seen them kissing, and after the couple refused to further “perform” for them, they were beaten and robbed. The following is an excerpt from Melania’s written account:

There were at least four of them. They started behaving like hooligans, demanding that we kissed so they could enjoy watching, calling us ‘lesbians’ and describing sexual positions…In an attempt to calm things down, I started making jokes. I thought this might make them go away.

The next thing I know is that Chris is in the middle of the bus fighting with them. On an impulse, I went over there only to find her face bleeding and three of them beating her up. The next thing I know is I’m being punched. I got dizzy at the sight of my blood and fell back. I don’t remember whether or not I lost consciousness. Suddenly the bus had stopped, the police were there and I was bleeding all over.

After reading this account, I thought of Jessica and the reactions to our band room kiss: half disdain, half sexual taunts. It had taken me a while, but I eventually learned that disdain and sexual entitlement are two sides of the same coin. That the act of demanding a woman act out your pornographic fantasy comes from a place of deep hatred.

Men often grow up believing that a woman-only couple is incomplete without their presence in some capacity.

When two women are romantically together in public, the act is read as a show for men rather than as a moment between two women with agency.

I keep hearing about plans for “Straight Pride.” I’d be lying if I said that I didn’t enjoy the internet’s mockery of the event, if it ever takes place. But the fact is that when I am with my male partner, I will not be attacked on a bus for being with him. We will be left alone because our involvement has been normalized. Because we look like how anti-LGBT folks think things ought to be.

If you like this article, please share it! Your clicks keep us alive!
Tags
hate crime
hate crimes
lesbians
violence
LGBTQ