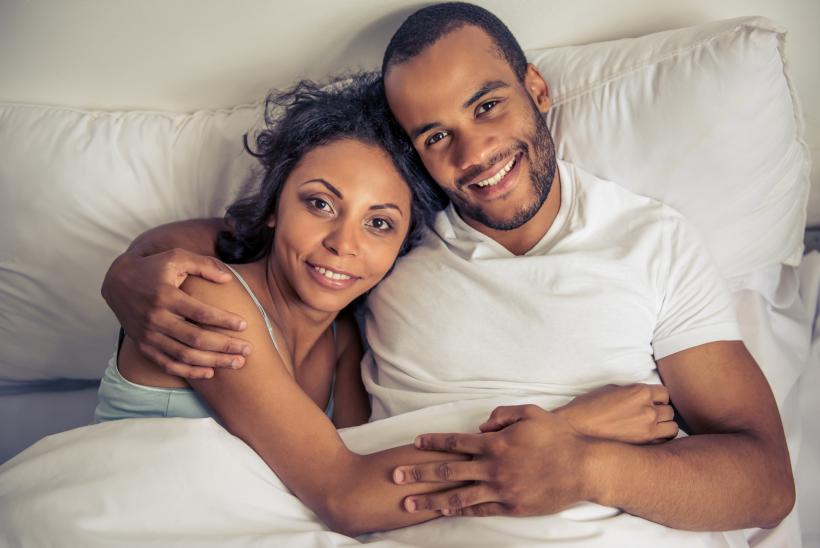 Our relationship — and the complexities of falling in love and marrying a partner on the other end of the sleep spectrum — is not unique.

I sometimes watch my husband sleep in the early morning hours. By tiny bits of light escaping through the cracks in the blinds, my eyes trace the lines of his face, and I smile at the sight of his tousled hair. Married for 15 years and together for 17 now, I am familiar with the signs he is waking up before his alarm goes off at 5:00 a.m.

Most days, I am asleep before he gets out of bed and begins his day. It’s not that hard for me to fall asleep in five minutes, as long as I wait for the sun to mark a new day before climbing into bed. I wrap my arm around him and pull myself into his warmth. Still in a dream, he sighs softly and shifts his body closer to my own. This is what works for us, the night owl and the early bird: stolen moments that bridge our opposite sleep types. This is how we stay connected without saying a word. I have always been a night owl. He’s always been the early riser.

But the older we get, the later I tend to stay up working on the couch and the earlier his day begins. He’s 44. I’ll be 40 in December. Maybe the future means a time when our internal clocks are in sync with the other’s, but for now, we work with what we’ve got.

Our relationship — and the complexities of falling in love and marrying a partner on the other end of the sleep spectrum — is not unique.

Angela Page Hawkins, a 44-year-old Atlanta resident, is a night owl. Hawkins falls into the 25% of the population with circadian systems that are hard-wired — or phase delayed — to get sleepy much later than those with phase advanced circadian systems. The 20,000 nerve cells in our brains that make up the circadian system, keeping our bodies on their respective schedules throughout the day, among other things, regulate our hormones and when we get sleepy. In 50% of the population, says Hawkins, the circadian system is actually quite flexible, allowing individuals to adjust their schedules between night owl and early bird. The rest of us end up fighting what may end up being a losing battle when we go against our internal wiring.

There are pluses and minuses for both night owls and early birds, also referred to as “larks.” Night owls tend to be more depressed and more likely to depend on caffeine, so it’s no surprise that insomnia also ranks higher for this group. On the flip-side, night owls are also said to stay more focused throughout the day and tend to be both more creative and intelligent and have a better sense of humor than our early-rising counterparts. (Don’t tell my husband I said that or I won’t stop hearing about his IQ being two points higher than my own. The thing about me being funnier? That one you can tell him.) Research says the early bird does tend to catch the proverbial worm more often, with a tendency for better grades, being more proactive, are happier, and healthier.

“I'm a night owl. Up all night. Struggle in the morning. But I go hard,” Hawkins said, adding that her husband is the early riser in their relationship. “My husband was my main focus when it came to learning more about sleep health. He wasn't sleeping well and constant night sweats. I wanted him to get some rest! So I researched and then built a company on what I learned.”

With sleep research in hand and her desire to help her husband get more zzzs, Hawkins launched Le Creatif Linen, which sells eco-friendly, designer bedding and leisure-wear, in 2017.

“At the end of the day — no pun intended — you have to be considerate of your spouse,” Hawkins said. “No one likes interrupted sleep. Communication is key.”

Bill Prasad, a Houston-based licensed professional counselor that has worked with couples, agrees. Opposite sleep schedules can be a point of contention amongst couples, he said, because habits are defined. They can be changed, but, says Prasad, it isn’t easy. What can’t be changed are the personalities people have developed that play right into our sleep types.

“What it comes down to is how does each couple with opposite sleep schedules work together to try to overcome those challenges so that each person gets what they want out of the relationship?” Prasad said. "Sometimes it isn’t just about compromise, but it is about acceptance."

I can attest to this from personal experience. My husband’s currently working from 3 p.m. to after midnight, sometimes not making it home until about 2 a.m. Strange as it may seem,  this schedule change does give us more time together in our waking hours, but I know how hard it is on him physically. As much as I’d love for him to stay on this shift because it works for me, we both know he’s going back to his usual 5 am wake up for his typical day shift as soon as the opportunity presents itself because it doesn’t work for him.

He’s accepted my need to stay awake while he sleeps. It’s only fair for me to accept — and support — his need to work during the hours for which his DNA is primed.

This give and take is the kind of validation Prasad says that can help prevent resentment.

“That can fracture a relationship,” he says, adding that couples can work to close the gap caused by opposite sleep cycles and remain connected.

“Do you get an opportunity to kiss them goodnight? Do you ask them how their day was?” Prasad says. “Cementing some of these things into ritual can help.”

Because the universe works in mysterious ways, my husband arrived home from work to find me on the couch, surrounded by pillows and our dogs, working on the very story you are reading now. He was fatigued and had only enough energy left to get himself ready for bed…but not before asking me how my day was. I shared a few highlights before asking him about his own. His voice was strained and his eyes heavy with the need for sleep, but he took the time to reply before heading to bed. I told him I love him. He told me that he knows.

And then I got back to work.

If you like this article, please share it! Your clicks keep us alive!
Tags
early bird
night owl
love story
Relationships
sleep