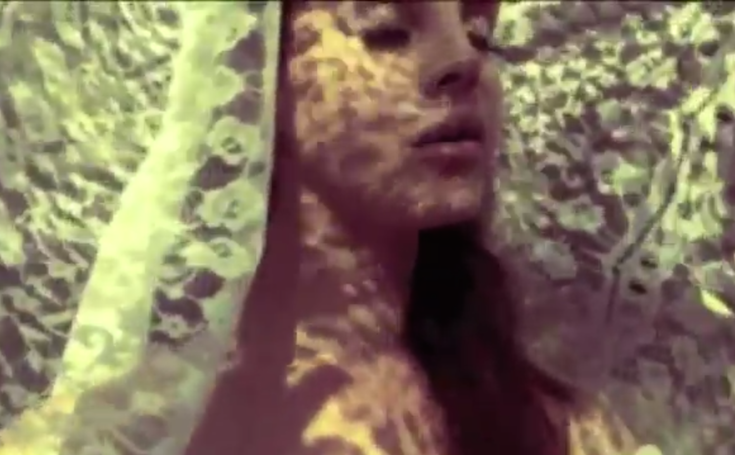 Married to no one is the new single. Courtesy of YouTube

Lezbehonest—I have a bit of a girl crush on Lana Del Rey. So naturally, the release of her new music video for "Ultraviolence" was like Christmas morning and a dopemine-d tween at a Justin Bieber concert all rolled into one for me. Does it disappoint? Hell no. Is there a social issue glamorized that must be addressed, like, five minutes ago? Oh dear Aphrodite yes.

Because the clarity that usually accompanies modern filmmaking isn't Lana's cup of tea, the video is shot with a vintage-y looking soft focus and filter. It begins with Lana donning a veil—oh em gee, she's a bride?! Who is she marrying—man, woman, gothic spirit, beast, the bible?!

She's marrying no one. Lana basically spends the entire video making sexy doe eyes at the camera highly reminiscent of Fiona Apple's minxing about in "Criminal." Then she starts nibbling on someone's fingers. Maybe the person filming? But because few people actually get nutrients by nibbling stranger's fingers, Lana then eats an orange. Hooray! Lana then continues her strange walk to the church, alone.

Undeniable strangeness and sexiness aside, we've got to address elephant in the room of Lana's musical psyche. After all she named the entire album as some nebulous homage to Clockwork Orange, a depraved if genius film of epic proportions. One not so subtle moment that celebrates and sexualizes violence a la Kubrick however?

And of course Lana smiles sexily into the camera as this line warbles over her, soft as a breeze, slippery as a snake. Her eyes meet yours and make us wonder why this moment is so red-hot and also so chilling. He hit you like, in the face? He hit you like, on your bottom? He hit you like, rough sex S&M? Or he hit you like, drunk and cruelly and yet you still liked it?

It surfaces a lot of questions—it's a loaded sentence of 9 words.

While it's important to note that Lana is no Katy Perry—she doesn't make music designed to appeal to young girls, but that being said, we live in a culture that welcomed Chris Brown back into mainstream media with open arms after his violent outburst sent Rihanna to the emergency room. It's worth arguing that celebrities have a certain responsibility for the words they send sprawling into the stratosphere and into the ears of millions. (Some of whom are impressionable enough to think it's OK to be walloped by your lover because Lana was too. And liked it.)

But if the role of art is to provoke, perhaps Lana is certainly singing the right sort of song.