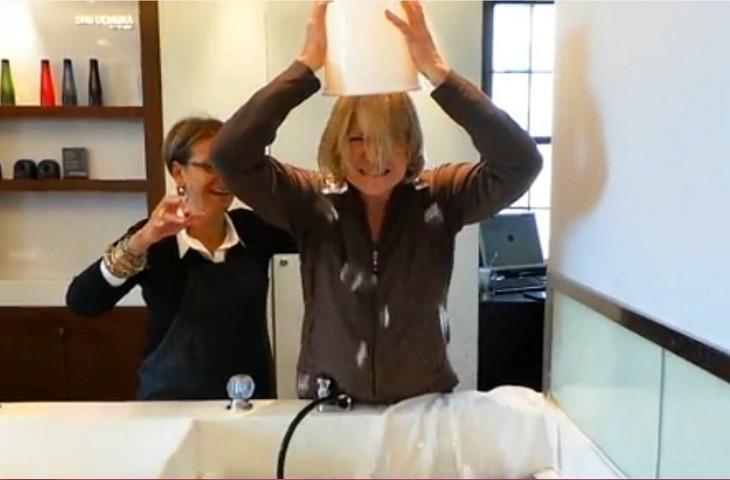 I’m not sure how much actual good comes from raising awareness for diseases—the Susan G. Komen onslaught hasn’t exactly done wonders for breast cancer reduction—but I’m sure people’s hearts are in the right place. Or in the case of celebrities, perhaps their self-promotion is in the right place. Either way, the ongoing “Ice Bucket Challenge” craze for ALS (Lou Gehrig’s disease) is showing up on countless YouTube videos and blowing up Facebook news-feeds across the nation.

You just can’t escape it—even if you desperately want to—so why not stop worrying and learn to love the challenge. Here we’ve rounded up five of the best celebrity challenge videos for your end-of-summer viewing pleasure.

In her never-abating bid to impress Matt Lauer, the Queen of Craft took on the challenge. Although it was pretty lackluster—despite her “I’ve got ice down my back” dance, it looks like not that much frigidness really gets on her. The key—as we learn from later videos—is to use icy water. But the act is out of character for the woman who wears, approximately, a bajillion products on her face every day, so she makes the cut.

This one knocks out a slew of celebrities—and apparently a bunch of nobodies behind Justin Timberlake (psh)—in one video. The Roots’ jumping and “ooh!”ing post-dump is the best part. Will the New York Jets accept Jimmy’s challenge?!?

Doing it the way any self-respecting politician from Alaska has to, Senator Lisa Murkowski ups the ante by jumping into a pool of freezing water. What gams she reveals in that swimming suit! Her trash-talk challenge to the rest of the Senate afterwards is awkward, cajoling them to “demonstrate your commitment to getting rid of ALS” by taking the challenge. Like in lieu of publicly funding research?

Gates humiliates his Facebook rival, by engineering an ornate bucket-dropping contraption that utterly douses him after Zuckerberg anticlimactically does it the old-fashioned way. #Generationalnerdwars

When will the challenging end? Probably by the time the Fall lineup of shows hits TV. But until then, here's hoping for throngs more of celebrity self-icings.