Why Ferguson Is A Feminist Issue 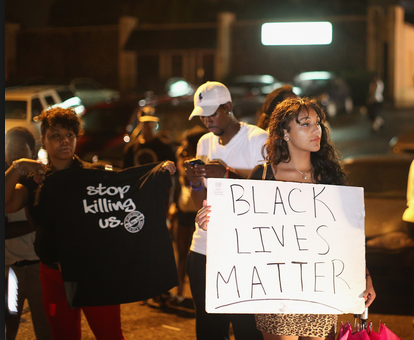 I’ll just come out and say it: I really love me some Twitter. But in the past two weeks I’ve been particularly glued to the flitting blue bird.

Why? One word. (Or should I say, three-syllabled hashtag?)

I absolutely binge-consume tweets and links to vines and commentary and speeches and marches. I’m steeped in and transfixed by the events on the ground and how they are reverberating across our shared consciousness. And I’m not alone.

It seems like many, many prominent feminists are organizing, writing, marching, sending supplies to, and yes—tweeting—about Ferguson; so many of our eyes are pointed St. Louis-ward. So many hearts are sinking under the weight of yet another senseless murder, for all the injustices propagated by our country’s profound and longstanding issues of systemic racism and oppression.

And yes, I chose my words carefully—when I said “feminists,” that was a distinct choice. Obviously all kinds of communities and people are rallying around these issues—and their insight and support is crucial. But I want to specifically address the feminist component—why are so many of us rallying around Mike Brown?

Standing With Women Of Color

Ferguson is a feminist issue because throughout our country parents of color have to give their children “the talk”—a devastating discussion about how to avoid abuse, harassment and violence from the police, who profile and target said children often just for not being white. Our nation’s mothers are writing heartrending pieces about how parenting in our racist society “feels like a fool’s errand;” Stacia L. Brown grapples with all this in a letter to her daughter:

But how can you learn at 4 to do what still makes me flail and falter at 34? And how can I let you go when a girl a year younger than you was gunned down in our city last week and a boy who would’ve headed off to college for the first time on Monday was executed within steps of his Ferguson, MO home on Saturday?

I’ve no more access to the language for this than you do.

Because, sadly, let’s not forget it’s not solely black men and boys being killed by police, but women and girls of color, too. A population that, just to add to the long lineage of racial issues in the nation, is far too often left out of feminist discussions and discourse. So as our country grapples with the trauma of Ferguson and the racism that divides us, white feminists should make a concerted effort to listen to and stand with women of color. (A dialogue we should always be fostering.)

As Michaela Angela Davis writes in her piece "Black moms shouldn't have to have 'the talk'":

The burden has far too long been shouldered by black parents and kids, requiring them to adjust to the injustice of excessive force, police brutality and ignorance.

We should not be asking outraged mothers, fathers, families and communities to stop hollering. We should be asking trained law enforcement to put down their guns and listen up.

Yes, we should. We all should.

If you like this article, please share it! Your clicks keep us alive!
Tags
feminism
Ferguson
Michael Brown
women of color
racism
reproductive justice