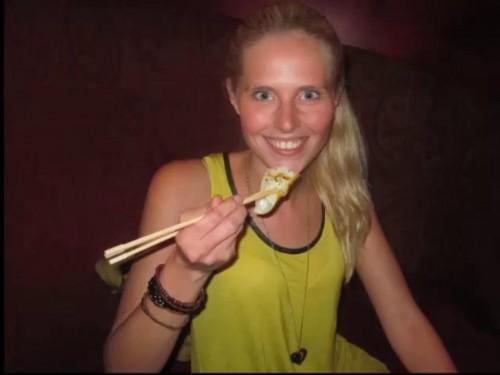 Did you guys hear the one about the Dutch girl who faked a trip to Southeast Asia? Nope, that isn’t a joke, so the upside is there's no terrible punch-line either.

In truth, 25 year-old Zilla van den Born literally deceived her friends and family into thinking she’d peaced out to Southeast Asia for five weeks; happily this wasn't a foray into vacational sociopathy, but something different entirely together.

Van den Born's deception was so clever and decidedly complete, she included Facebook pics of her being waved off at the airport by her family to kick off her fake-journey. Only, in reality, she promptly returned to Amsterdam via train—to flood her social media with 42 days of Photoshop-tastic pictures of her seeming to snorkel, travel in traditional Thai tuk-tuks, visit Buddhist temples, and sample “authentic” cuisine. Except all of the shots were taken in her own swimming pool or at venues around Amsterdam—and then, of course, altered with magical computer skills.

Apparently her efforts were for a school project:

“I did this to show people that we filter and manipulate what we show on social media—we create an ideal world online, which reality can no longer meet . . . My goal was to prove how common and easy it is for people to distort reality. Everyone knows that pictures of models are manipulated, but we often overlook the fact that we manipulate reality also in our own lives.”

The Daily Mail, that middle-if-you-squint-brow outlet in the UK, however, is a bit pissed about this little stunt. You can tell because they even USE CAPS in their mile-long headline about Zilla’s actions: "What a scam! Student boasts to friends about trekking through Asia, visiting stunning beaches, tasting local cuisine and meeting Buddhist monks - using FAKE photos taken in her home town."

The incredulity rages on:

“She even created the illusion of a Thai hotel room in her own bedroom, using old Christmas decorations and an umbrella, to fool her parents during Skype sessions. If all of that wasn't enough she sent text messages in the middle of the night and posted Asian souvenirs that she had actually bought from local shops.”

But c’mon, we’re getting angry about this? Really? Isn’t it just kinda hilarious at best, totally innocuous at worst and kind of fascinating no matter what? Like damn, biddy pulled no punches on this little project. Shouldn’t we instead be giving her high fives?

And as for her project, does it not capture something very real? Perhaps this is at the crux of some people's anger towards Van den Born's society-scathing trickery; it's just too soon, girl.

We all—or at least just all the people I know—fake it online to some extent, at the very least by omission. It’s a global phenomenon. How would I know? I, unlike Zilla, did travel to Southeast Asia for a backpacking jaunt (this is confirmed by the fact that my photoshopping skills are, sadly, nonexistent and that I am entirely too lazy to put this kind of energy into a scam, elaborate and epic as it might be).

And while I have a zillion pictures of me atop elephants, scuba diving, zip-lining through forests, and chilling with orangutans, I captured 0% of the times I got bed bugs (which, fun fact, was on Valentine’s Day), had to get stitches in a sketchy clinic with chickens running amok, or when I was crying into my Pad Thai due to exhaustion and travel-related frustration.

My fellow backpackers from all over the world—including, yes, the Netherlands—operated the same way. We all had our whispered confessions—unbelievably privileged to get to travel but occasionally (or more than occasionally) . . . super. effing. miserable. “Don’t tell anyone,” a British friend I’d met while learning to scuba dive revealed to me within my first two weeks on the backpacking trail. "I hated my 8 months in Australia. All of my friends back home were so jealous, but it really sucked.”

I heard shit like this all the time. And it was all spoken on the most gorgeous beaches known to man—beaches that offered up the most enticing photo shoot opportunities imaginable (of which we all partook), so no one back home would have a clue as to the misery behind the paradise scene.

My intent is not to attempt to stir up sympathy for those with the, I’ll restate, incredible privilege to be able to travel. But merely to point out that everyone lies online. Both abroad, and home. No one, literally no one, in the history of the universe has yelled, for example, “Hey get the camera, Uncle Frank is having an emotional, alcohol-fueled breakdown! We gotta get this on the Fbook real quick!”

We tend not to photograph, document, and post about those times we’re hitting rock bottom (unless, of course, we’re intentionally seeking succor from loved ones). And doesn't dear Zilla's little project, instead of pissing you off, only serve to make you feel better about the global nature of this reality?

We're all just living our lives, Daily Mail, with varying degrees of misery—no matter what Facebook would have you believe.