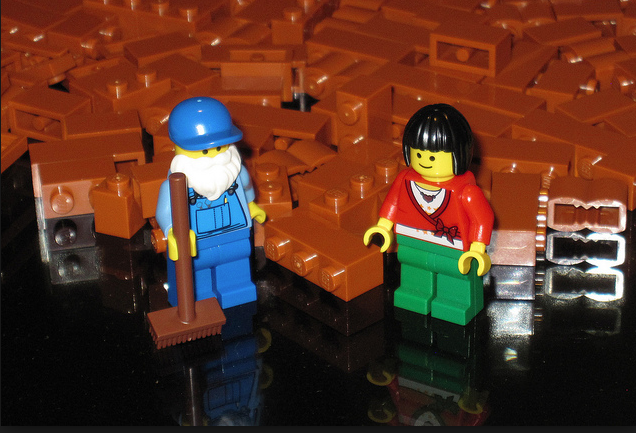 You know what this construction site needs? A blunt roller. Courtesy of flickr.com

In a rags to riches dream come true for every stoner across the nation, rapper Waka Flocka Flame offered to pay $50K a year for a personal blunt roller. Teens everywhere (presumably) threw their pre-calculus books out the window and started pursuing decidedly greener pastures.

As the illustrious job was just offered via Twitter to Seth Rogen (who's reportedly worth a cool $45 million), we're going to give both parties the benefit of the doubt as to where the money is actually going—charity? hoax building? Not right up their nose?—and ask a different question.

Who in the glorious US of A is working harder and earning less than Waka Flocka Flame's blunt roller?

Doing social work is emotionally draining. There are different types (clinical and direct service), but the overall goal is similar: help folks with problems. Be it in a school, hospital, agencies or a private practice, the work is intense, but meaningful. At times it's hands-on, but—like many jobs—there's also a bevy of paper work. (It requires at least a bachelor's degree and many positions demand a graduate degree as well.)

Chances are, you've seen these folks working their asses off. Literally. Construction labor is fierce manual labor. Not only are workers preparing sites for buildings by mixing concrete, loading materials, digging, operating machines and assisting with carpenters and engineers, but they're also under substantial psychological pressure. Things can't go wrong here—not just for the folks who will be using said structures, but also the workers themselves. Fatal injuries are a very real risk.

When I see the word "engineer" in anything, I automatically assume it's rather difficult. Sound engineering technicians aren't exactly building bridges, but that doesn't mean they aren't working hard. They often work for a broadcasting station (TV or radio), a recording studio, school or office, They record, edit, mix, synchronize and duplicate sound using an intricate sound-boards. If you think sound engineering isn't a thing, pay close attention to your favorite sitcom in the near future. That laugh track ain't through magic people! (Often it requires a bachelor's degree, but not always.)

If running, disciplining, feeding, blowing noses and cleaning up literal crap for an army of hyper kiddos sounds easy, I'd be curious to hear about your former employment. While helping children grow can seem both rewarding and dare-we-say fun. children will keep you on your damn toes. Not only is it grueling, but there's always that fear of saying/doing the wrong thing and psychologically damaging a kid. Forever. Good luck. (Childcare workers often work fulltime as well as irregular hours. This position typically requires a child development degree in addition to basic emergency training techniques.)

Let's be real: this job is far more difficult—and important!—than people give it credit for. Although higher ups often admit they'd be downright lost without their secretaries. Which makes sense, as administrative assistants often organize just everything, juggle schedules, interface with the public (which can be a hell in its own right), and tackle just about anything else that needs to be done. In many ways, they really run the show at any office.

Yikes. While there's something to be said about doing the job you love and being careful with money, knowing that a person has the opportunity to make more (in some cases, double) one's income just by rolling blunts and partying with Waka Flocka Flame, feels like a slap in the face.

Can we say it all together? Income inequality sucks.