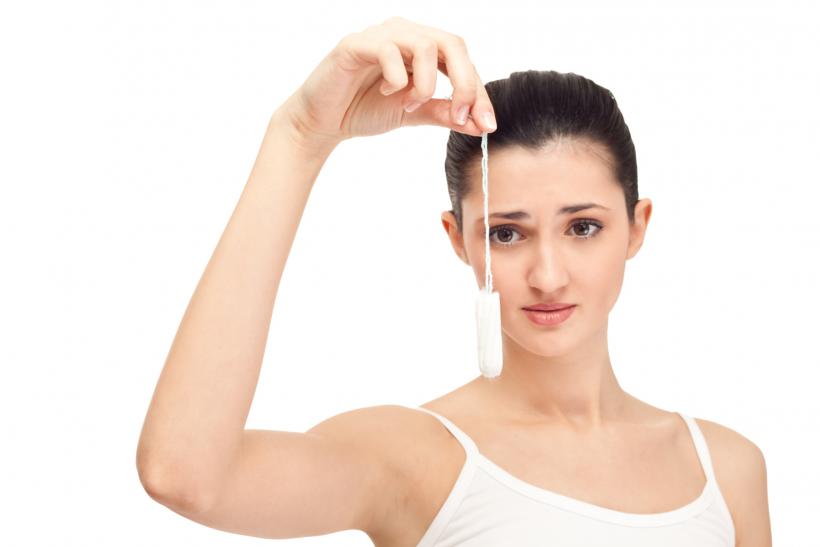 The message behind the seemingly mysterious Tampon Run is simple: Menstruation happens. It is normal. DEAL WITH IT, HATERZ.

Created by Sophie Hauser and Andrea Gonzales— two high school students who met during the Girls Who Code summer program—Tampon Run is a new computer game whose object is deceptively simple: “Hit all the enemies with your tampons. Don’t let them pass you. They’ll confiscate your tampons. Collect tampon boxes for more tampons. Don’t run out of tampons or it’s GAME OVER.” (Game over, indeed. I think we've all had the chilling sensation of knowing humilation is nigh; the Time has come and there's nary a tampon in sight).

And that's exactly what Hauser and Gonzales aim to alter; the shame we've all been a bit steeped in is ubiquitous. When players begin the game they are greeted with this message:

“Tampon run is a way of discussing the [menstruation] taboo in an accessible way. Instead of holding a gun, the runner holds tampons, and instead of shooting enemies, the runner throws tampons at them. Although the concept of the video game may be strange, it’s stranger that our society has accepted and normalized guns and violence through video games, yet we still find tampons and menstruation unspeakable.”

The young creators of Tampon Run wanted to get the message out that periods—shocker!—are a totally normal and natural body function (you don't say) and illustrate the sheer ridiculousness of the taboo surrounding menstruation [] that is somehow still a thing:

“When girls are out of the house and need to change their tampon” Hauser said, “they slip it into a sleeve or a back pocket, they hide it on the way to the bathroom. This is the menstrual taboo. Yet most women menstruate for half their lives. Everyone’s mom, sister, girlfriend or even the lady sitting next to you on the train probably has menstruated (or maybe is right now!). It isn’t weird or strange or gross, or at least we don’t think it should be.”

That’s right, no need to hide! Own that shit! Periods are everywhere, and they have been since the dawn of humanity. It’s probably time for society as a whole to accept that 1. Periods aren’t gross and neither are women’s bodies, and 2. Aren’t blue, contrary to what tampon commercials would have us believe.

Unfortunately, some people seem to have trouble coming to grips with the idea that vaginas don’t exist for the sole purpose of housing fleeting boners however. Last August, Guardian columnist Jessica Valenti was targeted with an unbelievably vicious, misogynist stream of abuse on Twitter for merely asking:

Twitter friends: Anyone know a country where tampons are free or somehow subsidized?

Valenti's dare-we-say friendly, unloaded inquiry set off a proper deluge of hateful garbage, highlighting just how deeply ingrained our "cultural discomfort" is with our skin-shedding uteruses. And on top of all of this? Having access to a host of sanitary products is actually an all but ignored first world luxury; in many countries:

"...the lack of access means missing work or school, getting infections from reusing the same rags without cleaning them, and even dropping out of school because your period causes you to fall so far behind in your studies. But while that's more of a problem in developing countries, even in places like the United States, the high price of tampons means "some women resort to selling their food stamps in order to pay for 'luxuries' like tampons." — Amanda Marcotte, Slate.com

Hm. Makes me want to just start throwing fistfuls of tampons at the all those shaming period-haters. Wait, I can!