Meet Sappho, The Bisexual Poet Way Ahead Of Her Time 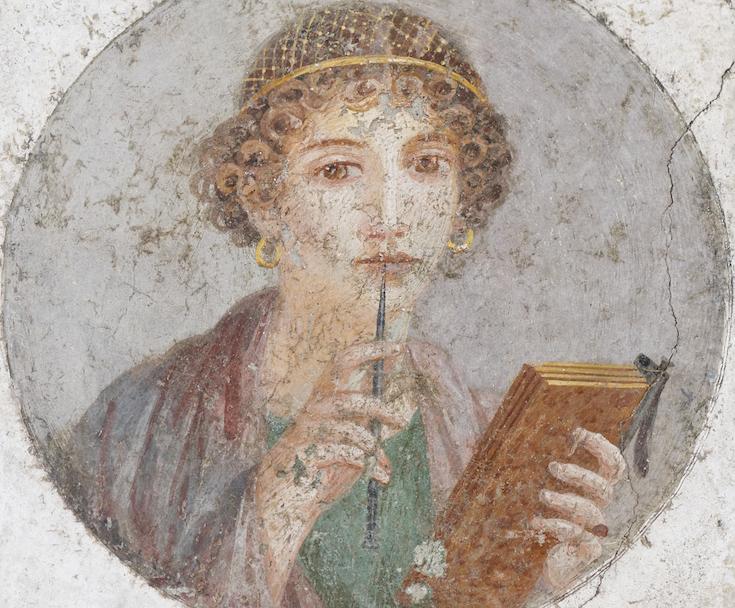 If you are a lit lover, you may have heard of the poet Sappho. But did you know she's believed to be one of history's earliest known bisexuals? Born (around) 615 BCE, this wordsmithing woman was writing sexually charged poems to both genders long before Shakespeare's grandparents were born.

Sappho was Greek and resided on the island of Lesbos. This particular spot of the world celebrated homosexual relations more liberally than most parts of the world (a fact which remains true even today), and gave rise to the word "lesbian." Legend had it that the most beautiful women on the planet also lived on Lesbos—making it the unofficial temptation island.

Given this environment, it's no surprise that Sappho felt comfortable professing her love to men and women through poetry. In addition to her viscerally powerful prose, Sappho crafted a groundbreaking technique still celebrated today. The sapphic meter, as it's called, is a four-line stanza that's been used by many poets—including even lady-hating Ezra Pound.

Though Sappho was acclaimed in her day, many who came after her weren't appreciative of her expressions of love. Pope Gregory VII actually demanded Sappho's works be burned in the late 1000s. Unfortunately, this leaves modern readers with little information about Sappho, and only one complete poem. Yet her work has endured in fragments (otherwise, I wouldn't be writing this), and remains revered.

Read a few of our favorite poems below from this bold and talented woman way, way ahead of her time.

You May Forget But

You may forget but

let me tell you

will think of us

Like the sweet apple which reddens upon the topmost bough,

Atop on the topmost twig, — which the pluckers forgot, somehow, —

Forget it not, nay; but got it not, for none could get it till now.

Like the wild hyacinth flower which on the hills is found,

Which the passing feet of the shepherds for ever tear and wound,

Until the purple blossom is trodden in the ground.

He Is More Than A Hero

He is more than a hero

the man who is allowed

to sit beside you — he

to the sweet murmur of

your voice, the enticing

laughter that makes my own

heart beat fast. If I meet

you suddenly, I can'

speak — my tongue is broken;

a thin flame runs under

my skin; seeing nothing,

hearing only my own ears

drumming, I drip with sweat;

and I turn paler than

dry grass. At such times

death isn't far from me