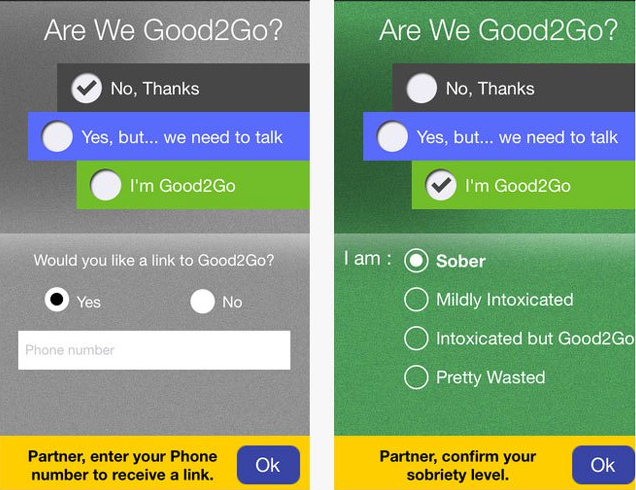 You know the saying: “There’s an app for that!” We hate to employ that gag-inducingly common phrase, but we can't resist. Sexual consent? There's an app for that! And it's called "Good2Go."

In its own words:

“Good2Go App is a simple consent mobile phone app that targets college-age adults. Good2Go App seeks to prevent or reduce sexual abuse, miscommunication, or regretted activities by facilitating communication and creating a pause before sexual activity so that both parties can ask and gain affirmative consent. Good2Go App includes a sobriety questionnaire so that both parties know if affirmative consent can be granted. If the partner who is being asked if he or she is "Good2Go?" is too incapacitated, consent cannot be granted.”

Here’s the thing. Part of me feels like anytime anyone is explicitly discussing the notion of consent, an angel gets its wings. But in this particular instance, I am feeling a bit conflicted. I more than get that technology is huge and bleeding into every facet of our lives and while I believe that much of the time, said bleeding can be great (specifically I’m thinking about how I used Seamless this weekend to procure food when I was too hung-over to face sunlight) . . .

An app to ensure consent generally just makes me sad.

Indeed so much of our nation’s discussions about sexual assault makes me sad—and I’m not even referring to the noxious slut- and victim-shaming nonsense that often feels like it dominates the conversation, but even the genuinely good-faith efforts to confront the statistic of one-in-four women facing assault or attempted assault in their lifetimes. Because while this app stirs up further conversations about consent, which I’ll reiterate, I think is great (despite some problematic features), what it completely fails to address (because it cannot) . . . are the real issues at hand.

First of all, it’s hard for me to fathom people in the heat of moment busting out their handy dandy smart phones to check in about each others level of consent (the app claims to be “simple” but watch this 3-minute video explainer on how to use it or read about Slate’s Amanda Hess’ attempts to use it and judge for yourself).

Secondly, all the people who will use the app (all . . . three?) are not the ones likely to engage in sexual violence. They are the ones, it seems to me at least, who are in fact least likely to rape—given that they are familiar enough with the term ‘consent’ and enthusiastic enough about it to download an app centered on it.

And here’s where my sadness enters into the equation. At the root of this app seems to be fear about sex. It’s a fear that is widespread. From Bill Frezza’s utterly egregious recent Forbes article “Drunk Female Guests Are The Gravest Threat To Fraternities” to Bloomberg’s equally upsetting "Hook-Up Culture at Harvard, Stanford Ebbs Amid Assault Alarm"—"news” stories about alcohol and sex and assault and loose women are everywhere.

Rampant misogyny, victim blaming and ludicrous cries of “hookup culture!” all aside (but thanks for comparing my vagina to a bike lock Chris Herries), what is clear from all these pieces is a tangible near-terror about sexual interactions.

In the Bloomberg piece, Malik Gill is nervous to give female classmates a beer because he “doesn’t want to look like a predator.” Like, seriously?

As a country, our relationship with sex is so goddamn fraught.

Awareness of sexual assault and issues of consent should be prominent in our national consciousness, but it seems to slip into the realm of unproductive paranoia real quick. And when we’re actually inventing technology to curb sexual assault . . . I think that speaks to an issue that can only be solved if our nation had a healthier relationship with sex more broadly. Hell, the app is one giant euphemism—"Good2Go”? The name itself is a huge sidestep of what it purports to even be about.

Sex. Let’s call it sex and let’s talk about sex. Let’s start with some great (read: actual) sex education in schools. Let’s teach children and teens about their bodies and how to keep them healthy in sexual situations. 95% of Americans get laid before they get married and yet “abstinence only” education reigns, despite it being shown, time and again, to be completely ineffective, only driving up the number of pregnancies (and, by extension, abortions).

Let’s talk about consent then. Let’s make it part of the lexicon so we don’t have to have our effing president create a campaign to tell us hey, sexual assault? Not cool.

Like think about that. That’s where we are as a nation. Our elected leader, our commander-in-chief, is putting considerable time, money, and effort into a massive (though flawed) anti-sexual assault campaign. Guys in college are apparently petrified to offer beers to women. And now we have an app to help us figure out if/how/when we get it in.

When it comes to sexual assault, much of the answer is in talking and education—we need to lay the proper foundation for people to express their sexualities early on. We need to establish shame-free frames for discussing very real and very healthy human sexualities. And then we need to talk to each other, human to human, about what we want and how and when.

Only then will we really be "Good2Go."

If you like this article, please share it! Your clicks keep us alive!
Tags
good2go
Sexual Assault
App
Rape
it's on us campaign
Sex
sexuality
abstince only education