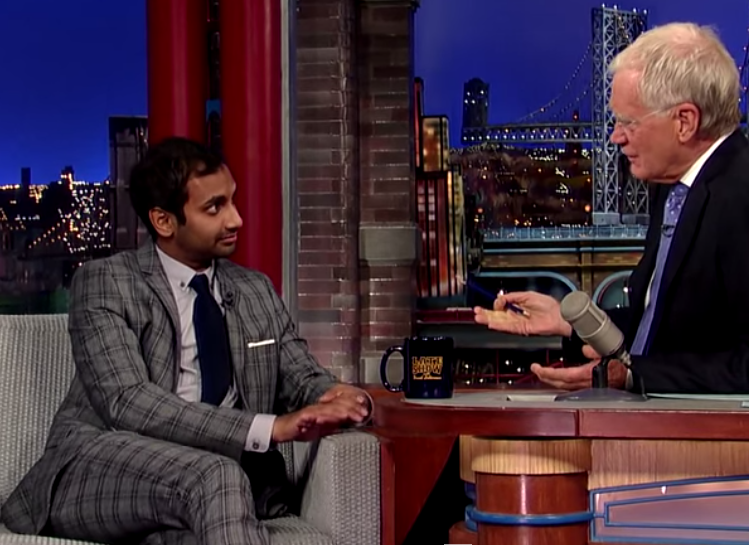 We got another one, y’all! Another be-dimpled male celebrity (we're still damn excited about Joseph Gordon-Levitt's recent work) coming out in support of feminism. In Monday evening’s appearance on The Late Show With David Letterman, Aziz Ansari (sporting a suit Tom Haverford would no doubt fist pump) not only called bullshit on sanctioned misogyny, but called out the audience for not embracing the word as well. And he, of course, did it hilariously.

He began by discussing how he’s dating a chef, whom he identified as a “big feminist,” and how he, too, is a feminist. Then he asked fellow feminists in the audience to clap. A few did, but let’s just say, the applause . . . was less than overwhelming.

The applause after this statement, for gender equality, was notably louder. Interesting.

Aziz was armed and ready for this applause discrepancy, identifying the stigma around the word but saying that’s just how words work: “If someone asks if you’re a feminist, you have to say yes.”

His analogy? A pretty excellent one:

“You can’t say you’re a doctor that primarily does diseases of the skin. ‘Oh so you’re a dermatologist? No, no no, that’s way too aggressive of a word—not at all, not at all.’”

And one more gem for the road:

"You're a feminist if you go to a Jay-Z and Beyoncé concert and you're not like, 'I feel like Beyoncé should get 23 percent less money than Jay-Z. Also, I don't think Beyoncé should have the right to vote and why is Beyoncé singing and dancing? Shouldn't she make Jay a steak?'"

Given the tremendous stigma that still surrounds the word feminist, Aziz's observations are more than apt. In a poll conducted by the Economist last year, a mere 28% of Americans identified as feminist—only 18% of men and 38% of women.

What makes Aziz’s tackling of this issue even more important and poised to exact actual change is, as the New York Times identifies, the “enormousness” of his own moment as a comedian right now. He’s performing—per popular demand—two shows tomorrow night in Madison Square Garden, one of only a handful of comedians to ever headline the venue.

And Aziz s incorporating feminist concerns into his current stand-up routine. In the same interview with the New York Times, he describes developing a bit “in which he asked women in the audience to describe experiences of being harassed or followed by strange men, and asked men to explain how they would defend women in those situations,” explaining he wanted to “express his own astonishment at everyday dangers that women face and to show how helpless he would feel as a bystander." Basically, Aziz insists the only thing men have to not do is masterbate in public.

Not that we weren’t super into Tom Haverford’s Rent-A-Swag idea, but these feminist notions being proffered in a public—and funny!—forum are basically the bees knees, which is to say, Aziz Ansari is light-years away from being on our Dunzo List.

Check him out killing it below: