Confession: I Participated In A Sleazy Cancun Wet T-Shirt Contest 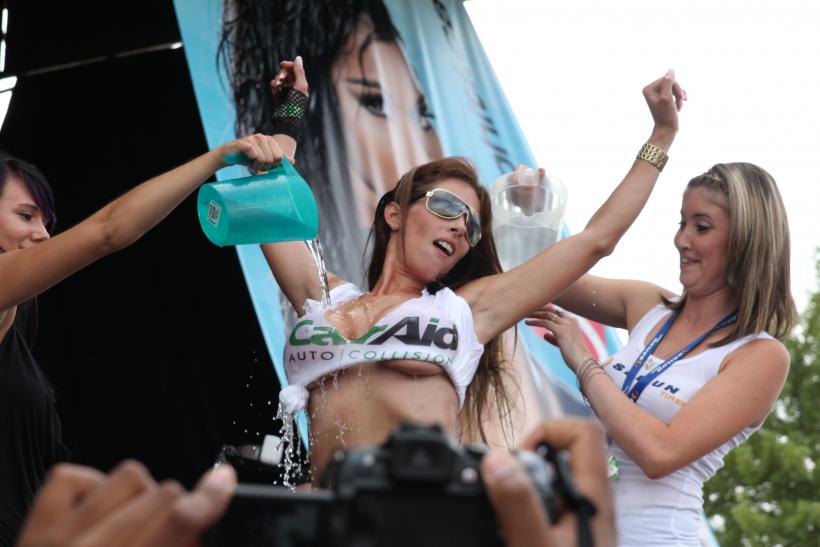 This is not a photo of me. But it may as well be. (Credit: Wikimedia Commons)

I have to get something off my chest that’s, well . . . about my chest. Blessedly, between the Bacardi 151 and what I’m sure is an act of willful repression on behalf of my brain, I remember little about this chest-centric tale. But what I do recall very much revolves around my boobs . . . and my showing them off to hundreds—if not more than a thousand—club-goers in Cancun.

To set the proverbial stage (before we get to the actual one), in the months leading up to the incident in question, I hadn’t really been drinking. I had, however, been on heavy-duty sleeping meds to help curb my out-of-control insomnia. I would piece together later (partially as an effort toward redemption) that the mixing of these meds with alcohol can lead to “impairment in thinking and judgment.”

But at the time, I wasn’t focused on that ill-fated cocktail of sleep meds and rum. On the night in question, I appeared, as a friend delicately put it, “thirsty.” And indeed, from the moment I burst into the painfully stereotypical sleazy Cancun nightclub, I had, as demonstrated by my mien and the way I interacted with male patrons of the massive, almost Roman-arena-esque venue, one thing on my mind.

I only wish I knew exactly what the fuck that thing was.

This is why I’m so shocked about my shenanigans on this particular eve—it’s so far outside of anything I’d ever done. Guys responding to my physical appearance, at least 97.3% of the time, doesn't flatter me—it only causes discomfort. Being hit on, even respectfully—even by the "good guys"—generally only ever induces a low-grade anxiety. I just don’t embrace the identity of someone who is particularly lust-worthy, regardless of what I am told about my physical appearance—nor would I ever choose to be thought of in that way. It's likely due to a long history of being ostracized for my intelligence in a society that bluntly cleaves smartness from attractiveness, but the broader point is, I'm not empowered by dudes looking at me and getting turned on. Thus the very idea of publicly revealing myself and writhing around to evoke erections causes me to shiver.

I remember the club promoter approaching me, leading me by my hand into some of the most direct cross-hairs of the male gaze. I don’t recall what he said to me, but I do remember enthusiastically following him as I weaved my way between the sweaty bodies of dancers and drinkers to the backstage area.

I recall surveying the room, my compatriots. There were three other women there. They were skinny, blonde, gorgeous—a couple boasted Eastern European accents that I failed, either in my dialect ignorance or alcohol-ridden state, to identify.

It’s a blur now, so I don’t remember if the outfits we changed into were kept in a bucket or some kind of bin. But somehow they were doled out—and they were skimpy: white, essentially sheer, cut-off belly shirts and an article of clothing that, if we must relegate it to the realm of official garments, would probably best be described as a “skirt,” but could have easily been mistaken for a headband.

And yet somehow, the sight of such articles of clothing and the sprawling size of the club with the stage that awaited me didn’t deter me from tearing off my clothes and readily changing into these near-transparent scraps of cloth.

Waiting backstage, the other women seemed fairly calm and collected. So was I—enthused, even. I wouldn’t recall that sense of surety except that a dear friend attempted an intervention. She'd tracked me down and somehow fought to get backstage.

“Do you know what you’re about to do!?” she asked. “Do you really want to do this? Are you sure you want to go out there?” I don’t remember my argument back to her, but I do recall how emphatic it was: Thanks for checking in but YES, I was sure.

Only the spottiest bits of memory guide my recollection of the rest of the endeavor. I know I didn’t go first. I'm pretty sure I was third. What I recall from my time being doused with water, wearing thin scraps of clothing while attempting to flaunt it to Lil Jon are all the smartphones—so, so many smartphones. I don’t remember attaching a value to them, just that there were so. many. lights and flashes (and, with bittersweet retrospect, all the YouTube channels I, with my pointed nipples, must be on).

I was upset with my dance moves, too; I could have done better, the music choice wasn’t quite right. This is the memory that sticks with me—my profound failure to execute my top moves. That and the woman who followed my act (if that’s the appropriate term to use for squirming around senselessly under a manmade torrent of water on a stage in Mexico). And I say this as a fellow performer: This woman was made for wet T-shirt contest domination. She even outshone Jessica Simpson in her car-washing video. The crowd went wild.

Inevitably, I lost—a human experience I hate no matter the exercise—but I recall telling myself at the time, “You were just outperformed. She earned that win.” And verily, she had.

After our collective efforts, I changed back into my clothes, inexplicably choosing to keep the sopping rags I’d just donned as a memento. I also received a cheap bead necklace for my efforts, which I quickly donned as if I hadn't just violated all the tenets I'd accepted as core to my being.

I would go on to spend the eve locked in passionate and public make-out sessions with an Australian (who'd defended his country in a "Which Country Can Drink The Most?" contest) and a Mexican (who, according to my two close friends who'd decided to document our affair on camera, was likely a teenager despite his assertion that he was 24)—neither of whom I remember (though I will concede, the latter and I did look quite happy together in the pictures of us embracing on top of a random car. Apparently I cried at our parting).

The next day, my flight back to the U.S. was canceled due to a snowstorm. I considered it part of my karmic retribution for such a sleaze-tastic performance. The other part of my karmic reckoning, of course, was my tremendous hangover, which was so painful I was relieved I didn't have to board my flight, sure that if I had, I would have likely vomited on my seatmate.

I spent the whole next day groaning in pain—the waves of my monumental hangover crashing over the entirety of my being—desperately reading about feminism, seeking to make space for my transgressions. I've since made peace, reconciling my actions and my politics—my feminism now allows for my "thirst," however seedy the identity it might adopt. That said, off of my sleep meds and away from Mexican nightclubs, my little wet T-shirt stunt has been far from repeated. My night at the Cancun club remains an aberration—one that no longer plagues so much as intrigues. Is there some part of me that enjoys partial nudity in front of huge crowds? Or was that a one-time-only, sleep-med-induced iteration of myself that I'll never see again?

I would say the question keeps me up at night, but my insomnia, and reliance on sleep meds, have both since abated.

If you like this article, please share it! Your clicks keep us alive!
Tags
confession
wet t-shirt contest
cancun
exhibitionism
feminism
personal essay