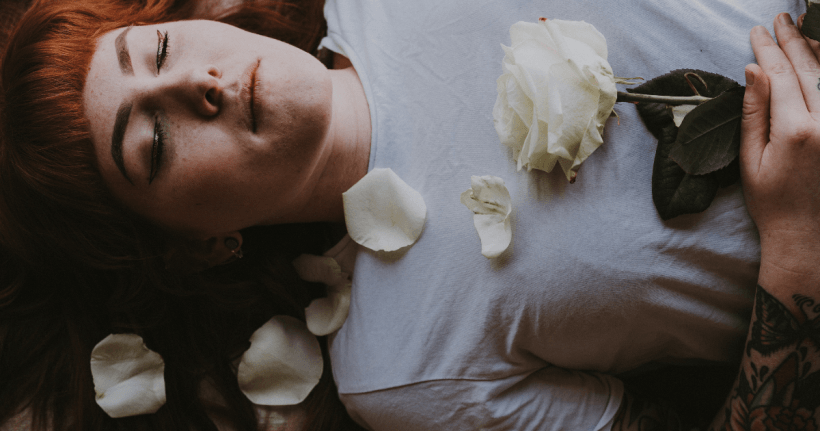 It’s okay; he was old as dirt. My mother called to tell me when I was on the train home from work. I was distracted — on my walk to the train station I had observed a man who was eating deli meats out of a suitcase and wanted to tell her about this connoisseur of cold cuts instead. My mom didn’t seem that interested. I had no idea why; who wouldn’t be interested in a story about a man eating deli meat out of a suitcase? He wished me a happy Tuesday as I walked past — his mouth bursting with ham.

“How about I just call you when you get back home?” she said. She called me later that night and told me what happened.

My grief is not an angry thing — there is no denial or rage. I can’t call it a tragedy. A tragedy strikes you out of the blue and without warning. It’s not a tragedy when someone breaks slowly, moment by moment, and all that is left is a small part of what was once whole.

My grandfather was a good man — a photographer. He was a practical German, which is really the only kind of German there is. He loved Lincoln Logs. When I was young, my sister and I would spend entire afternoons at his house creating cabins out of them. It was the only thing he would let us make: he had a keychain in the shape of an oil lamp that lit up, and he would place it in the center of the cabin, so it glowed softly. I hated it. The only thing I liked to do with Lincoln Logs was to stack them, one on top of the other, until they fell crashing to the floor. I liked to witness the chaos before drifting off into the house in search of other things to destroy.

This story is like so many memories — something I found irritating but have grown fonder over, warped by the passage of time. Its eccentricity is what makes it memorable. Here was a man, so overwhelmingly German, that he could not let a five-year-old child get whimsical with a box of Lincoln Logs. Of course, a practical German would want to build instead of destroy. That’s what my grandpa did — he created a safe, sturdy home for his family and he provided for them.

I’m telling this story now because I never told it to him. He died, and I never told him how much I loved/was irritated by his strict interpretation of Lincoln Log architecture. He knew I loved him, I knew he loved me, but we never really got into the details of it. Love was not a question, but a statement of fact.

For his funeral, we took his ashes and the ashes of my grandmother and released them together. My grandmother died years ago from Alzheimer's. Her beautiful mind went in degrees — slow, slow, and then all too fast. The speed with which Alzheimer’s struck made it hard to imagine how she lived before. She had passages of Shakespeare memorized. She could list every major scientific accomplishment of the past 20th century. She was so, so smart. She was a good woman. And kind. And funny. And beautiful. She had bronchitis; every time she laughed, it came out as a wheezy cackle, like the evil witch in a children’s story.

I’m losing family members and trying to express the love I have for them as a series of adjectives — as though these descriptors will make up the sum of her person.

My grief is not an angry thing — there is no denial or rage. I can’t call it a tragedy. A tragedy strikes you out of the blue and without warning. It’s not a tragedy when someone breaks slowly, moment by moment, and all that is left is a small part of what was once whole.

They were old. There was no anger — the disease that had been working its way through my grandmother’s beautiful brain had been there for a long time. There was nothing to bargain for. There was only mourning, and a grim acceptance that now there was one less person I loved in the world.

At their funerals, we told these stories — stories that everyone knew the ending to — and I again found myself wishing I had told these stories to my grandparents while they were still here. These people, the people in our lives that we love, they leave a mark. When they are gone, that mark fades to a scar, invisible to the rest of the world but a constant reminder for the person suffering. It feels like drowning on dry land.

Eulogies are a tool to help with grief. They remind us of what this person was to you, to me, to family, to friends.

They create a portrait of how this one person shaped the lives of so many others — how this one person meant everything to everyone. A eulogy is a powerful thing. In 2016, The New York Times reported on the growing trend in South Korea to hold mock funeral services to appreciate one’s life. This includes writing your own testament and lying in a sealed coffin for up to 10 minutes to simulate death.

According to the World Health Organization, South Korea has one of the highest suicide rates in the world. A mock funeral approaches the problem by tunneling straight towards it. Since my grandfather’s death, I have become fascinated by the eulogy, more so than any other mourning practice. A eulogy is a template for how each person lived their life. It looks over their achievements but celebrates their legacy in the day-to-day.

“There’s a need to alternate between confronting loss and avoiding it,” said Meg Eifrig, Professional Counselor with The Center for Grief Recovery and Therapeutic Services. “I find that people are often concerned with ‘Am I grieving the right way?’ And the answer to that is to trust yourself. You are the one handling your grief.”

With that in mind, I thought it might be a good idea to focus on this loss. People always try to push past pain; sometimes we should stop and sit with our grief for a while. I wondered if my fixation on eulogies could be solved by barreling directly into it.

What if I gave eulogies to the people that I love, while they’re still alive?

My goal was to do it in a non-creepy way. Like anything I’ve ever done in life, I went to the Internet first to find templates.

An astounding amount of samples came from former President Barack Obama. His eulogies are held up as shining examples on grief forums across the Internet. The man really has a talent for celebrating dead people. The eulogies written and performed by this esteemed former president are beautiful. They are moving celebrations of political figures dedicated to a life of public service, with genuine feeling and respect for the unique accomplishments performed by each individual that has passed away.

I want nothing to do with these eulogies!

My father, who I love very much, is dedicated to a life of public service and a respected member of his community and blah blah blah, but do you know why I love him? I love him because he doesn’t watch TV the right way. It drives me batty.

I made the mistake of trying to watch Battlestar Galactica with him years ago. He would watch two episodes, declare that was enough TV for the day, then turn it off and tell me to do something productive. My dad doesn’t understand how binge-watching works. It’s taken him two years to finish the show. If we ever tried to watch a longer show together, like The X Files, we would both be long dead before we even reached Season 5. And yet I love him anyway, the weirdo.

Writing a eulogy for someone who is still very much alive is a balancing act: for starters, you’re probably going to weird them out by writing a speech typically reserved for dead people. For enders, eulogies are third-person narration. They do not speak to the deceased, they speak to those who survive the deceased.

I wrote my eulogies in direct address — they are love letters for a love story that isn’t over yet.

“[Grief] reminds us that we are wired for attachment in a world of impermanence,” said Dr. Robert A. Neimeyer, Professor within the Department of Psychology at the University of Memphis and the Director of the Portland Institute for Loss and Transition. “If we really take in that lesson, then we can appreciate that every moment we have will not be duplicated…At the end of the day, we will lose every person, place, and possession, but if we can be grateful for the relationships we have and hold, then we will have fewer regrets. We will have lived as deeply and as best as we can.”

I suggest you try it for yourself. They won’t be perfect (mine aren’t) but what in life is perfect? A eulogy is an expression of love through grief. Because love and grief have so much in common — they both last for such a long time.

If you like this article, please share it! Your clicks keep us alive!
Tags
eulogies
personal essay
death
grief
Memoir
grieving

Eulogies For The Living
Molly Harris