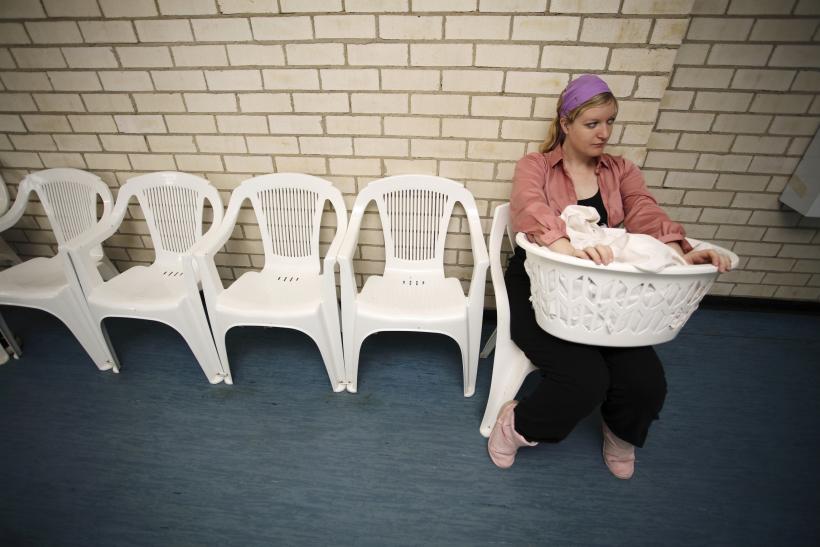 Marlee tolerated Chris’ blows and then the angry sex—she deserved every bad thing now—and as he snored, the street lamp’s yellow light formed a phantom orb behind her eyelids. She thought about her last day with Henry.

She had left him crying in his crib where she’d thrown him, a punishment for needing her more than she could stand. She’d fought for air as she tromped through the small house, her son’s voice wailing fire engine arpeggios all around her. In the bathroom mirror, she had frantically splashed her face with cold water. Fuck Jack. It was his fault, insisting she have the baby she never wanted, that they could be a sweet family. She had hit the back of her head against the bathroom tiles, wanting the pain to clear the mess she’d made. In the mirror she watched her fingernails draw blood from her soft cheeks. Henry took everything from her—her breast, her voice, her touch, even her smell was constantly on his skin. Jack worked all day and then several nights a week went to rehearsals with the band she used to sing in too. The solitude was suffocating. So she’d fled across the country, back to Chris, an old boyfriend, in Boston. Here she would audition again, stand on stage, sing her life.

After Chris left for work, Marlee dragged herself to the Copley T station for a trip out to Brookline to have lunch with a friend from her days at the Berklee College of Music. A pregnant woman hauled herself up the steep trolley stairs and a man near the door offered her his seat near the door. Marlee thought about how Henry had been quiet and still until the very end, when he began to flip around like a fish, kicking Marlee in the ribs up high on the left.

After a while the train whisked its passengers out of the darkness and up into the green corridor of Fenway. The pregnant woman closed her eyes to the light. As the speed of the train increased, whatever closeness remained between Marlee and Henry began to feel increasingly distant. She wanted to take everything back, to be a different person, not stronger, just capable of balance.

At the Brookline Hills stop, the pregnant woman got off the train. Jen had instructed Marlee to take the train to the next station, but just as the trolley doors began to close, Marlee slipped through them and out onto the platform. She found herself across from a large field, scattered with small children playing soccer.

The woman disappeared through the glass doors of a brick building marked The Evelyn Kirrane Aquatics Center, and Marlee dashed up three flagstone steps to follow. Inside, the lobby provided a view of a large swimming pool, diving area and wading pool through a large floor to ceiling window. The pregnant woman gave a teenager sitting at a desk a few bills before she went into the women’s locker room.

“Adult lap swim goes for another hour. Five dollars,” the girl told her.

Marlee looked at the large clock on the wall behind the blond girl. She was due at Jen’s any minute. She could always say the trains were slow.

“I’m not here to swim. Can I go in and wait on the bleachers?”   “Sure. Whatever. I think you have to take your shoes off, though,” the girl replied, flipping through a magazine.

“Sure. Whatever. I think you have to take your shoes off, though,” the girl replied, flipping through a magazine.

A wave of chlorine hit Marlee when she opened the door. She made her way to the bleachers across the slippery tiles and waited for the woman to emerge from the locker room. She wanted the woman to do something. She wanted a sign.

In a waist-deep in a wading pool three ladies tapped their hands on the water’s surface to a private rhythm. They waggled their armpits over blue kickboards and fluttered white feet beneath the surface. The pregnant woman emerged from the locker room, wearing a blue halter-top that just covered her belly. She braced herself on the steel railing to the wading pool. Marlee leaned her elbows on her thighs like an eager race spectator.

The pool was quiet but for the occasional splash until the lady in the bathing suit with purple hydrangeas spoke.

“Boy or girl? How far along? Is it your first? What hospital?”

The pregnant woman answered rapidly, softly, probably not wanting to talk, wanting to float. To simply float. Leave her alone, Marlee thought. Her body was an aching weight to bear.

A woman in a nubby white bathing cap announced that she was a neo-natal researcher when she was younger. “I envy the life you have before you,” she said, and then she leaned back and kicked away with a smile.

The pregnant woman said nothing, but smiled politely and then closed her eyes, leaned back, and floated as best she could, her stomach protruding like a small island from the chlorine sea. As if it were a contagious action like a yawn, Marlee also closed her eyes and sunk into the thick air until she too was submerged in a glorious emptiness. Each swish and smack of the pool water against the tiles lapped away at the weight of her guilt.

Her phone vibrated with a text from just as the humidity of the pool started to make her feel cotton-lunged and woozy: Gig is yours if u want it. R u in?

Marlee leaned against the sweating cinderblock wall, her heart banging around in confusion. Was she in? This was what she’d wanted when she’d auditioned the week before, but now the pool’s chemical aroma slid around in her brain and married that paint-can place in the past where she stood on a ladder in Henry’s room and reached up with a brush to dot the blue ceiling with white clouds. Olfactory memory confusion.

“I’m no painter but I can do this,” she had said to Jack, back when she was a force of pretending. “And it doesn’t matter if it’s a boy or a girl.”

“I’m here if you fall,” Jack had told her, always gooey with love.

Despite everything, he deserved more than the brief, shitty note she’d left him.

It seemed to her now like motherhood was a constant fall, a never-ending tumble. After she’d finished her nursery fresco and looked for surprise shapes in her sky, Marlee couldn’t find any meaning in the edges and swirls she had created.

Was it even motherhood anymore, once she’d left?

The phone buzzed again: 2wks for 1st show. Can u come 2 rehearsal tonight?

What the hell, this was it, right?

“Yes!” Everyone in the pool turned towards her echo’s point of origin. Marlee waved vigorously at the pregnant woman, who returned Marlee’s enthusiasm with weak-wristed confusion. Marlee grabbed her shoes, tiptoed as quickly as she could out of the pool and glanced at the wall clock that informed her she was half an hour late for lunch with Jen.

She madly texted and got the particulars about the tour as she hustled her way back to the T stop. She wouldn’t be paid much, but she’d be embarking on a cross-continental, twenty-city tour opening for a well-known band. She was unstoppable, powered by the sun, convinced every choice she’d made had led to this opportunity.

But as a trolley pulled up to the station and Marlee climbed the steep steps there was a phantom ache for Henry, poor unwanted Henry, flipping around inside of her. There was no compromising an opportunity like singing and traveling the world with caring for Henry, even if she sometimes missed the warm, sweet smell of his head and the way he clutched at her finger when he nursed at her breast. That was a snippet, though, a dream of motherhood. It was mostly terrible. She wasn’t one of those women who could smother her baby with the handmade purple quilt hanging on the wall over the crib or someone who floors the Volvo so that it plunges the whole brood over a highway overpass, but she had come to understand women who do such things. She’d stepped off a cliff, believing Jack when he insisted she could be a mother to his baby and continue to sing in their band. But there wasn’t much singing.

“You nurse and rock him to sleep tonight so I can go sing with the Spurs tonight,” she’d wailed at Jack, but nothing was so easy.

On the rare night Jack agreed to take care of Henry, Marlee removed motherhood like her black tank top after a sweaty session under the stage lights, it wasn’t enough. The band rehearsed without her. She sang the alt-country songs Jack had written for her to an audience of one, her little tyrant who screamed most of the day and nursed most of the night. Her hunger for the stage was more intense than any faintness she’d felt while Henry was inside her, and she dreamed of wearing her short skirts and the weight of her guitar against her hip.  So she’d left.

The train along rocked along the fixed tracks and Marlee stood at the front of the very first car—the car with the picture window view. Before her new gig took off for Vancouver, she promised herself she would call Jack to ask if she could stop by and see him and Henry when the band got to Denver. She’d ask forgiveness and remind him of what she had told him when they first met:

When Marlee was a child herself and ran wild in the tall backyard grasses in Wyoming, her mother had said, “My little butterfly, you need to stop your flitting about and hang the laundry!”

Marlee retorted, “Mama, I’m a songbird today, and I have too many songs to sing to hang your undies on the line.”

If you like this article, please share it! Your clicks keep us alive!
Tags
fiction
short stories
kate gehan
motherhood
marriage
becoming a mother
women who regret having children
pregnancy
birth
abandoning your children