Confession: I Went On A First Date With A Bigoted Homophobe 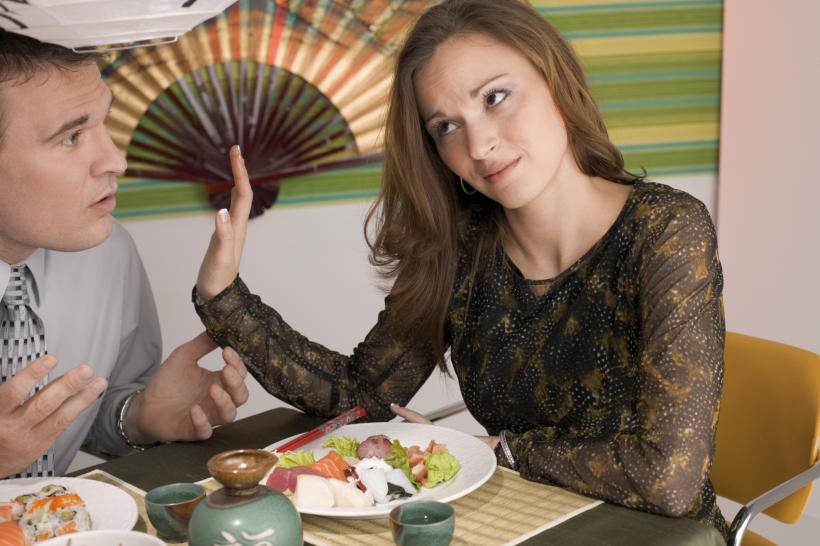 So. I started dating recently. And I use italics to emphasize the intentionality behind my decision. I've long spouted—both sober and articulate, sneering and drunk—that the "online thing" was an intriguing if unappealing option. I was dead-set on the whole, eyes locking across the room, blurred vignette surrounding our bodies, him taking my face in his hands with trumpets blaring on a mountaintop, sort of beginning.

Or, I feel the heat of his body against mine as I muscle my way to the bar for a whiskey.

Or, "I need directions and my phone is dead (again), can you help me please figure out where the hell I am . . . oh. Well aren't you fucking adorable, how about you take me out sometime?"

Or, "Dude, I have this friend and he's smart and funny. And doesn't wear those toe-shoes you hate. You should get a beer."

Any of these "real-life" manifestations would have worked.

But then nothing manifested.

I was six months post-breakup with nary a man in sight. I had savored my singledom—you should see the pile of shit, including a sack of banana chips, that I sleep beside—and I was newly keen to get some coy conversation on, maybe even wheedle a few smooches.

So I got dressed up and went out. I gave "the eyes." I smiled. I flirted. I asked questions even though I didn't care about the answer. I was trying to meet people.

And? Nope. Nada. Nothing.

And while all this hypothetical gender-behavioral morass is mostly awesome—nine times out of 10, I probably don't want you coming anywhere near me—I was used to New York City. Bitches be fending men off in bars like flies on shit. I was ready for the option, ya know?

Anyway. I threw in the towel and I got myself a Tinder account. And I will not lie. It was a wonderland. It was everything everyone said it would be and more. I swiped. I typed my sassy texts til my thumbs blistered. I felt empowered by the fact that I could sniff out 100 men in an evening, plucking the beautiful runt as the pick of the litter.

Then I went on 10 first dates in a kind of month-long blur that was stupefying. Exhilarating. The first two were kind of nerve-wracking—small talk, fuck my life—but by the fifth? I was like psssh, let me tell you about my esoteric graduate thesis and tumultuous childhood. Get to the good shit.

But by the ninth I was deflated. I'm someone who sort of likes everyone, but rarely really likes someone. I also have trouble fucking people I don't really like. So you do the math.

But then, on my tell-tale tenth date, I was greeted with a blur of confusion and a hot rushing feeling to my face. I liked him! I really liked him. I got those fluttering feelings in my stomach. I allowed myself to get excited. I imagined him kissing me. I found myself trying to be witty and cross my legs just so.

Shit, I thought. Now I'm all tangled up. I forgot how mind-consuming all this "liking" was. Amid more dates, a blur of texts, and a creeping sensation that wow, I might have actually met someone (albeit vis-a-vis the Interwebs), he told me wasn't going to see me for a month . . . with no explanation.

Well screw you I thought! I'm not gonna take a hot shower and cry about it (okay, yes I am); I'm gonna get my ass back into the bowels of my phone and say yes to one of the boys who wanted to wine and dine me.

And so it was that I ended up on a date with *Sean.

Sean had never been to Oakland—that should have been a bright fucking red flag, but alas—so I told him we should take a long industrial bike ride to a fancy cocktail bar near Emeryville. He arrived. My stomach sank. He was a full-on bro. But he brought me tulips. He was barely breaking even.

Then we started biking. Immediately I noticed he had a pretty nice road bike—a fairly new Bianci—but could barely ride it. He was wobbly and swerving and spastic. It was like those girls who wear Manolo Blahniks or Jimmy Choos or whatever the hell they wear, and then walk around looking like broken-legged fawns. Don't wear or own shit you can't own. It's embarrassing. (He was also without a helmet, which isn't "cool," it's dumb. But maybe he was worried about squooshing his gelled coiffure. Gag x 9,000.)

Then he started making passing comments about being scared of "the projects" as we rode through West Oakland. I stared ahead trying to will myself into the fading light, wondering if I could feign diarrhea and just bike home. Happily, it's fairly acceptable to not talk while biking. I pressed on and we pulled up to the bar.

I told him they made delicious cocktails so he ordered one. It arrived in a beautiful tiny glass, brimming with bubbles and a garnish.

"That's gayer than I was expecting." The bartender reeled back gently. She tried to smile. "Um, no, that's not gay at all?" she stammered before clutching his money and fleeing the scene. I bored my eyes into my shoes and pretended I hadn't heard it. I'm usually a fuck-you-are-you-kidding-me type, but I just couldn't face the conflict at the moment.

Okay, I thought. I can't talk to this human, so what do I do?

So we played. He started winning, and as I fantasized about crushing his larynx, he said, "Hey those are cool rings." I responded, "Hey, thanks." He said, "I've always wanted to wear rings; I think they're really cool but I think it'd look a little . . . ya know."

I stared. "A little what," I offered.

"Ya know," he said conspiratorially. "Plus, like where would I even find rings for men?"

I mumbled something to the effect of "anywhere" and took my shot, preparing myself to flee. Then a couple approached, asking if we wanted to play with them. Yes! I thought. Anything to dilute our interactions.

The four of us played for a while, and then I turned to my African American teammate to say, Hey sugar, it's your turn. At which point Sean turned to me and in a stage whisper demanded, "Are you calling her that because she's black?!"

I cringed. "What is wrong with you? I call everyone sugar. It's, like, a term of casual endearment?!" He grinned and laughed and tried to touch me. I shuddered. I walked away to the bar, telling myself just one more beer and I'm out. (Again, don't ask me. At this point I felt like I was participating in a social experiment and had not gathered enough data yet.)

As I walked to the bar, this gangly Australian (I had incidentally noticed him earlier with an impossibly hot Ethiopian woman) stood up and shouted my name. Holy shit, I thought. It's my old buddy *Ted! When I saw him last, he had a thick beard and long hair. Now he looked like Fabio, complete with a neck scarf and tight white jeans. He looked fabulous. We started shooting the shit, and I was introduced to his pant-worthy date. We were all chatting—normally—when Sean took me aside to ask:

Finally, I found my tongue:

"Dude, do you want to, like, talk about your homophobia? That's the third gay comment you've made in about 45 minutes."

He feigned total confusion. "What do you mean? No no, I was just curious."

"Right." I went to the bathroom, stared at myself in the mirror, and lamented the fact that I was an hour closer to death and I'd spent it with a grade-A shithead.

I gathered up my stuff and headed back to the bar, where Sean had decided to openly hit on Ted's date, insisting on locking hands overhead with her in celebration of her shuffleboard shot. His eyes traced the swelling bosom in her Xena-esque tie-up shirt.

I mean, I don't care if the guy wants to kiss every stray dog back to San Francisco, but really? He's going to man-handle this poor beautiful woman in front of her actually awesome and super attractive date? I was speechless. Impressed by his stupidity.

She took me aside to girl-talk, and—clearly not the most astute social observer—whispered into my ear, "Are you having fun on your date?" "Jesus, no! He's a total nightmare, I'm just terrible at disengaging."

She stared. This was not the girl-talk she wanted.

I smiled weakly and apologized, said my goodbyes to Ted and his lovely minx, and walked outside.

We began to bike home.

I pedaled faster, thinking at least I'll be home faster. He pulled up beside me wobbling like mad and almost ran me into the fucking curb like a drunk child.

We biked on in silence. I was already savoring his absence.

Finally, we pulled up to my gate. I wasn't even off my bike before I asked him if he knew how to get back to BART.

He glared at me and biked off. Now it was my turn to stare. He didn't know I was having a miserable time, how dare he just bike off?! I didn't even get the satisfaction of humiliating him as he tried to kiss me goodnight!

I shrugged and headed inside. And then I got this text:

"That may have been overall one of the worst first dates I've been on. And I don't mean that on you. I mean we left with absolutely no chemistry on the night it felt like. What happened? I'm curious."

Then the kid I really liked wrote me and said, "Silly. That's not what I meant. I'll see you next week."

And that's the price you pay for love-greed. A first date with a bigoted homophobic bro.