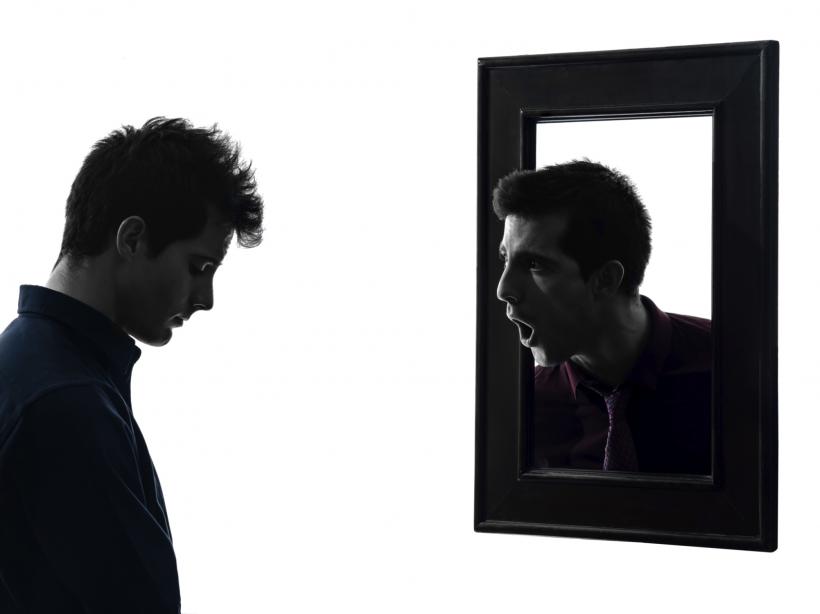 Eating disorders are not gender-exclusive. Yet, pop culture just loves the whole "narcissistic, privileged, young anorexic woman" trope. Because of this stereotype, those who do not fit neatly into the category may deny the firm grip this deadly disease has on their psyche—especially men. (Don't believe me? Search "anorexic man" on Thinkstock. Spoiler alert: There's one picture.)

I chatted with a reader—we'll call him Xavier—who began a bout of anorexia in 2009. If you were to believe the aforementioned stereotype, you'd never peg Xavier as a sufferer. As a natural athlete, Xavier spent more of his adolescence on the football field than the scale. His intimidating 6'5" stature drew eyes when he rocked the stage as a bassist in a series of locally successful bands. To fans and loved ones, Xavier was on the top of his game.

But under the surface, Xavier was in hell.

Describe the beginning of your illness.

Xavier: It started around December 2008. I had been out of high school for just over a year. I stood on the scale and read the number: 285. I was upset—torn up, even. I then saw a photo of a group of friends and me on Facebook. I was disgusted. I hated myself and how I looked. I decided I would never again look that way. I wasn't eating well at the time, so it began innocently.

How did things spiral out of control?

I started exercising and cutting back sweets. When I transferred colleges and moved to a new city in July 2009, it got bad. I was trying to be frugal after the move, so I cut back on grocery shopping. I ate few calories a day [because we don't wish to trigger anyone, we have omitted Xavier's actual number]. When I felt hungry, I would drink iced tea and smoke pot to distract myself. I felt tired and weak, but good about it all. I got a sick, twisted pleasure; I felt like I was taking control.

Things picked up in the fall. I got sick with mono briefly, and faced some difficulties within my family and on-again-off-again girlfriend. In just two weeks with mono, I lost 40 pounds—overnight thin.

What role did your depression play?

My body image drove me to eat less, but the depression dragged me down. I was chasing happiness that wasn't there. The depression never went away—regardless of what the scale said. I put on a fake face and partied a lot. Nothing felt real. It was like a vacation from reality. I hated myself for being overweight, then for losing the weight. That's what got to me the most: I would look in the mirror, hate what I saw, and know that I did it to myself.

What sparked the body image issues?

It's easy to point fingers at the media, but it's so much deeper than that. My concern was: How am I viewed by people in my every day life? All my best friends were in great shape, but I was the bigger guy. I despised being so different. At parties, girls threw themselves at my best friend. People looked at me a lot because I'm 6'5", but it wasn't the same kind of attention.

In your opinion, what is the biggest body image pressure faced by men?

Six-packs. They're everywhere—magazines, travel brochures, movies . . . It's associated with a better time and life. Being a guy, it's taboo to discuss body image insecurities like that though. I didn't want to tell my friends because I didn't want their pity.

What helped you get healthier?

My girlfriend. She cared about me, regardless of my size. We were on and off most of it, but got serious in March 2010. I told her how I lost the weight, but she already knew something was wrong. She checked in on me and got upset when I hadn't eaten. After three to four months of this, I felt okay enjoying dinner again. I was less concerned with losing weight. Even though we broke up in January 2011, I was in a better place.

Where do you stand today?

Anorexia is rough. It's one of the hardest things I've been through because it's both physical and mental. It's taken me a long time to get over it. In some ways, I'm still trying. I'm not sorry I went through this: I'm stronger for enduring it. Now, I like who I am becoming. When I eat now, I consider the value of each item rather than the calories. I learned to moderate, and I'm way healthier than that day in December 2008 when I stepped on the scale.

My problems didn't go away when I was thinner. Now, I face them.