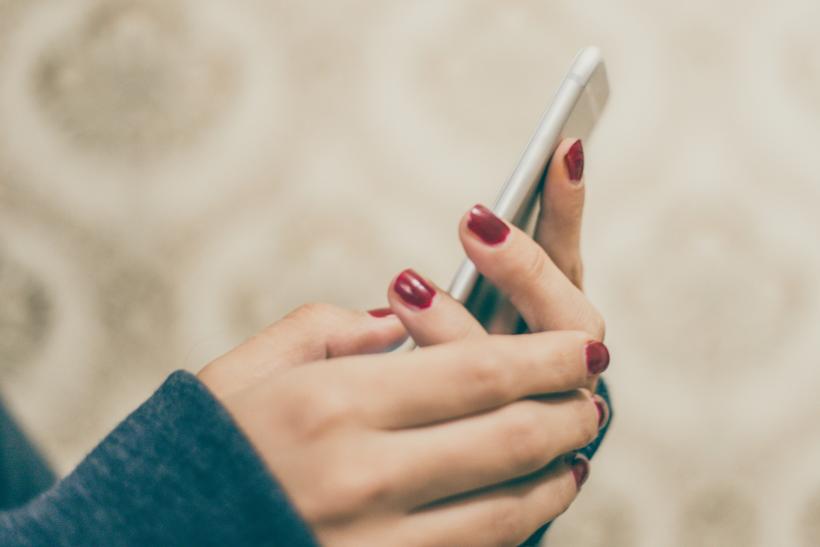 My family still couldn't talk about her death out loud, but I needed a reminder she was really gone.

My aunt’s number wasn’t in my list of “favorites” anymore, but it was still in my contacts. Alone in my parents' garage, I sat cross-legged on the sticky dark green vinyl of a chair with loose wooden legs and went through a routine I’ve practiced dozens of times over the last few months. I touched “Aunt Kelly” on the screen and waited for a robotic voice to say, “this number has been disconnected.”

My family still couldn't talk about her death out loud, but I needed a reminder she was really gone.

The automated recording had become something I could count on. Or so I thought. As I waited for it, with my phone in one hand and a sweating Coors Light in the other, I barely noticed when the call went through instead to an unfamiliar voice.

This is how I met Shawn, the man who took my aunt’s number. Eventually, Shawn would become a vessel for my hope and longing. But that day in the garage, he was just a voice I heard on the other end.

The night my aunt died, my phone buzzed over and over again, wobbling on the Ikea nightstand beside my bed. I rolled over and saw “Johnny Kash,” a play on my stepdad’s name, on the screen.

It was the 4th of July, and I didn’t want to do anything for the holiday — I hated fireworks even back then. But in the middle of DC, outside of my apartment building, the city was celebrating. I figured my parents were calling because they were too.

When I finally answered, I expected to hear my parents' excited yells into the speaker phone. Instead, I heard John’s heavy breathing. It took me a few seconds to realize he was sobbing. I’d never heard a sound like this come from him, the big, bald, Harley man I’d come to love.

Kelly, my mom’s younger sister, played a huge role in my life. Growing up, when my home life was painful, which it often was, she gave me a sense of hope and possibility. After ten years, my mom had left my alcoholic dad. As my dad faded from our lives and disappeared to some other state like Tennessee, my mom remarried despite my brother’s and my desire to remain a family of three. I can’t remember there ever being a time when Kelly spoke to me like a child. She told me the truth, listened and made me feel like an adult. She helped me see that I could build any life I wanted. When I spent time with Kelly, I felt more in control of my future. I felt safe. 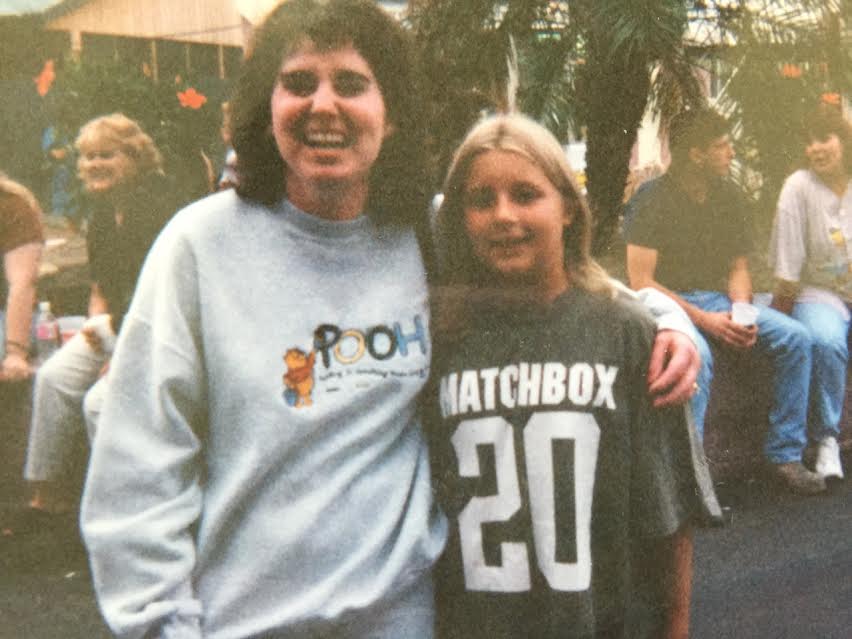 I hung up the phone without asking John any questions and sat in the same position, my back propped against pillows leaning on the wall behind my bed until the sun came up that morning.

That night, I took a flight to Michigan and found myself sandwiched between my seventeen-year-old brother and his pregnant wife on my parents' couch while we wrote our speeches for the service.

“I’m nervous I’m going to cry,” my brother, a Marine who would be deployed to Afghanistan a week later, said.

At the funeral, as my mom and grandma melted over the casket with weak knees, family members circling to help them stand, I stood steady in the back of the room her body had been assigned. I never cried. I didn’t get down on my knees, look up at the sky and plea for an answer.

Instead, I wondered what was wrong with me.

I not only felt broken and wrong, I felt like my lack of grief added yet another layer to my family’s sadness and confusion. No one said anything, but their swollen, tear-filled eyes stared curiously in my direction with thoughts I imagined were some form of "she doesn't care."

Ever since that phone call from John on the 4th of July, I didn’t act like I was supposed to, and I didn’t know why.

A year later, sitting in my parents' garage, I would have done anything to go back to the time when it made more sense to be overcome with this feeling. My pain still looked different than my mom's and grandma’s. It didn’t flow from me in the form of tears — it was a bubble inside of me that started small and grew at unexpected times. It grabbed ahold of my breath until there was only room for soundless sobs. When it felt like it couldn’t get any bigger, I did something, anything to remind myself why it was there — like call my Aunt's number. But this time, instead of the automated message I’d come to expect, it was Shawn.

People aren’t always who we want them to be. I wanted Shawn to give me the tenderness and kindness my Aunt Kelly did. I wanted him to care about and legitimize my feelings. I wanted to tell him about the small memories, like the salt in the ketchup and the big memories like the nights we spent laying in her bed talking for hours. I wanted someone to listen like she did.

At first, I thought it might be my uncle, my aunt’s husband. Maybe he decided he needed the number too. But after a moment, I realized that was impossible. The number had already been disconnected for months. It must have been transferred to someone else.

I lit one of the Marlboro Lights my mom left for me on the old, repurposed TV table my brother and I used to unfold in front of our couch to unpack our McDonald’s two cheeseburger meal with fries and a coke. It reminded me of how I would mimic Kelly’s every move, dumping salt into my ketchup.

“Sticks better,” she’d say. As the memory lifted from my mind, my phone vibrated with a text.

The name “Aunt Kelly” showed up on the screen.

At that moment I thought, who am I? Who are you? Immediately, I began telling myself a story. Maybe this was the universe’s way of bringing someone special into my life — of giving me what I needed. Maybe I could tell him how she wasn’t just an aunt to me. She wasn’t just my mom’s sister and best friend — she was my best friend, too.

I called the number back.

“Hello?” I paused. Even though it had already happened once, I was startled to hear his voice again.

“Hey,” I said as casually as possible. “I’m sorry. This is probably weird.” Another pause. I swallowed and said, “This was my aunt’s number. She’s dead.” I explained my routine, and he told me that I had called his work phone.

"New job." I noticed he sounded about my age, but with a more rugged voice. It made me picture him working outside in Michigan's summer heat.

“She had Lupus, but she wasn’t supposed to die. It was some kind of hospital error.”

I could tell Shawn wasn’t alone. The background noise made me think he was at a bar. I heard someone else ask, “who is this chick man?” I wanted our conversation to be sacred. I wanted us to talk alone.

“Hey, listen, I’d love to talk, but maybe we can do it another time? You seem busy.” He agreed.

“Yeah, yeah. Don’t stay a stranger,” he half laughed.

Over the next week, I received texts from the number that still appeared as Aunt Kelly. They only came late at night or in the early hours of the morning. I woke up to see that Shawn was thinking of me and had questions: “Where do you live?” “Have a car?” “Can you send me a pic?” They weren’t the kind of questions I was hoping for. I wanted him to be curious about me and what had happened.

Still, I wanted to talk to Shawn again. I thought his bar visits might have something to do with the texts that left me feeling empty. Maybe he's drunk; maybe he's sad like me. Maybe we can be there for each other.

A few nights later, I called him again. “Send me a pic, let’s get together,” he said as soon as he answered. I felt exhausted by the thought of fending off more of his attempts to see me in whatever way he could.

He wasn’t interested in getting to know each other over the phone at first. In fact, he didn’t seem interested in really knowing anything about me. I told him I wouldn’t give in and meet him. I wanted conversation and connection. I wanted to trust this voice on the other end of the line.

I didn’t understand why at the time, but I wanted our physical beings to remain anonymous.

“You reached out to me, so how are you gonna tell me we shouldn’t meet up?” I could tell he was irritated. His answers became shorter, the pauses in between our words became longer. The hope I had for Shawn had turned into something else: disappointment and even a little bit of fear.

People aren’t always who we want them to be. I wanted Shawn to give me the tenderness and kindness my Aunt Kelly did. I wanted him to care about and legitimize my feelings. I wanted to tell him about the small memories, like the salt in the ketchup and the big memories like the nights we spent laying in her bed talking for hours. I wanted someone to listen like she did.

I wanted him to be her.

Instead, Shawn was just some guy who happened to get Kelly’s number. I thought he could be an untethered third party, that I could talk about my grief without feeling ashamed.

Bell Hooks says in her book All About Love, “We are taught to feel shame about grief that lingers. Like a stain on our clothes, it marks us as flawed, imperfect.”

The next night, flawed and imperfect, I sat in the garage on the sticky vinyl chair again. This time I wasn’t alone. My mom sat across from me. I looked at her with a lump in my throat.

I finally asked, “Can you tell me how Aunt Kelly died?”

If you like this article, please share it! Your clicks keep us alive!
Tags
death
loss
family
letting go

A Stranger Answered My Aunt's Disconnected Number; Here's What He Taught Me About Grief
Liz Presson

Put It In Writing: Using A Contract To Heal My Relationship
Liz Presson