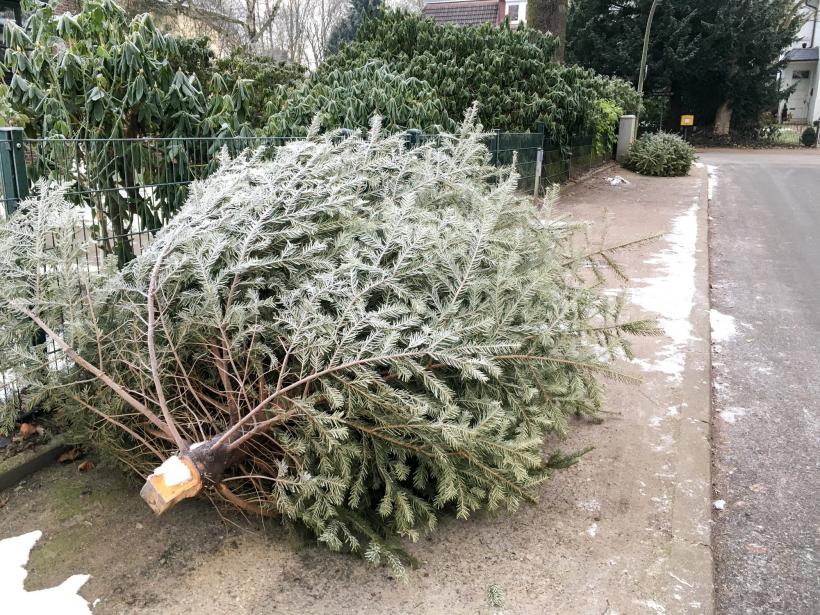 Christmas was my family’s escape.

At midnight on December 24, 1994, my mother found a leftover Christmas tree in an otherwise vacant lot. The lone tree was resting against a metal fence, wrapped in netting, like a bandage. It was left over from the local tree lot’s holiday sales and sat waiting to be hacked and sawed and slid through a wood chipper the day after Christmas because it no longer had a purpose. With so few people looking to buy Christmas trees so late on Christmas Eve, the lot had closed, but the gate surrounding the tree remained unlocked and propped open.

My mother was desperate for a tree, for a successful Christmas morning that brought joy and hope to our family after a year of hardship.

She knew the tree was going to be discarded, so she removed it from its unlocked, fenced-in location, and with the help of my older sister, loaded it into the car. Together, with just hours before the excitement of Christmas morning, they drove back to the hotel my family was learning to call home.

We had moved into the hotel six months earlier, when my twin sister and I were still just shy of four-years-old, after my family's home in Alamo, California burned down. My family of seven, which included my father, mother, three sisters, and brother relocated to the nearby city of Lafayette, while my parents worked to rebuild our home and our lives.

At first, living in the hotel felt magical and grand — especially at Christmas time. At night, the large, French-chateau inspired building was easily spotted from the nearby highway, as the holiday lights glistened through the trees. It wasn’t just the outside of the hotel that was seasonally decorated. In the lobby, was a cozy fireplace with chairs to curl up in, and a large Christmas tree in front of the grand stairs, decorated elaborately with red and gold ornaments and bright white lights. Even the banisters on the stairs leading up to the second floor were wrapped in garland and lights. At night, Christmas carols would play softly, and my twin sister and I would watch from the landing on the second floor, as guests, dressed in their best holiday attire, attended festive parties and benefits in the ballroom below. While the hotel life, with room service and luxurious amenities was fun at first, as Christmas grew closer, I began to resent our new accommodations. How would Santa find us?

Christmas had always been particularly magical. Growing up with Crouzon syndrome — a rare craniofacial condition where the bones in the head fuse prematurely, Christmas was my family’s escape. At Christmas time, my twin sister and I were just like other kids. It was the one time of the year when our facial differences didn’t matter, when our health scares and hospital stays didn’t have to be the main point of concern. Before the fire, my parents had always worked hard to make sure every Christmas was over-the-top and extravagant; I think because there was a part of them that feared it would be our last. It was almost as though it was their way of making up for the medical trauma my sister and I faced the rest of the year. It was their way of distracting us, of trying to provide us with a sense of normalcy. In some ways, I think it was a distraction for themselves, too. Either way, it worked. Christmas became the one time of year where my sister and I, just like our siblings and the other children we grew up with, anxiously awaited the arrival of Santa Claus, and the excitement of wrapped gifts under our beautiful, brightly-lit tree.

It was the one time of year where we didn't feel "different."

In the hotel, my parents worked hard to, once again, make Christmas feel magical — the way it did before the house burned. We still left cookies on a decorative plate for Santa, and carrots for his reindeer. We still watched holiday movies and listened to Christmas carols. Though my parents worked hard to make Christmas feel the same, so much had changed. We had no chimney for Santa to shimmy down. We had no place to hang our stockings for Santa to fill in the early hours of Christmas morning. We didn't even have a Christmas tree of our own because having trees in individual hotel rooms posed a fire hazard. So in letters to the North Pole, I sent Santa my new address and hotel room number. And every day, my mother would promise me that Santa would not forget us this year.

That Christmas Eve, my twin sister and I went to sleep in our room, just next door to my parents and down the hall from my siblings. Huddled together in our large queen-sized bed, we could hardly contain our excitement, believing Santa would soon set foot in the room right next door to ours. So we laid there, counting down the number of hours to Christmas morning until we fell asleep.

That night, as we slept, my mother and sister, who was in high school at the time, ventured out to find a Christmas tree. They knew how much the holiday meant to the family, so they drove around to hardware stores and tree lots, looking for anywhere still selling Christmas trees. Though the hotel had initially said we couldn’t have a Christmas tree in our room, my mother did not take no for an answer. And when they returned to the hotel with the tree, the hotel staff didn’t make it an issue and instead helped get it upstairs to my parent’s suite on the third floor.

After getting the tree to the room, and setting it up in the stand, my mother realized that though they had a tree, they were still without ornaments and lights and decorations. Being so late in the night or early in the morning, stores were no longer open, so my mother once again went down to the hotel’s front desk. She explained the situation to them and told them how desperate she was to make our first Christmas in the hotel memorable.

The hotel staff was sympathetic. They didn’t have any extra decorations or lights around the hotel or in storage, so the women at the front desk helped my mother undress sections of the tree in the lobby. They took bows and ornaments from the tree, and removed lights from a tree in a conference room on the second floor, and gave them to my mother. She spent the next hour hanging the lights and bows from the branches. What initially felt like a disastrous holiday was beginning to feel more like a Christmas miracle.

When I woke up on Christmas morning, there was magic in the hope I felt as I walked into my parents' room to discover that Santa had found us, after all.

In the middle of the room was the one thing I had spent all month praying for — my family, and a beautiful Christmas tree with what appeared to be the brightest twinkle lights, most sparkly gold ribbon, and shiniest red ornaments. A reminder of the simple joys of the season, and the warmth and generosity of the holiday spirit. We were home.

If you like this article, please share it! Your clicks keep us alive!
Tags
Christmas
Christmas tree
holidays
family
struggles
hope

The Year Of The Christmas Tree
Ariel Henley

"In the Service": A Comedic Look At Being A Woman In The Food Industry
Ariel Henley