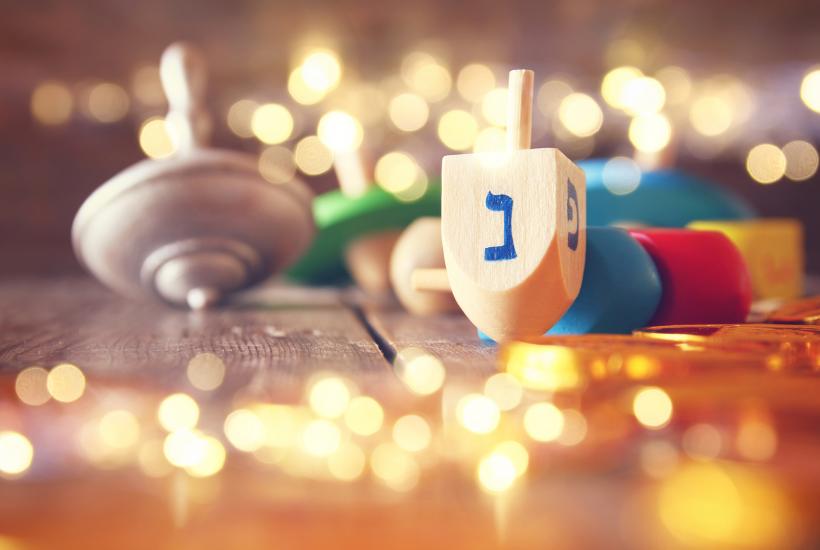 Both involve lights, a miracle, and fall on the 25th day of a winter month, but that’s about where the similarities end between Hanukkah and Christmas.

Hanukkah, a minor holiday celebrating the re-dedication of Jerusalem’s temple in the 2nd century BCE, takes on an outsize role in Christmas-crazy America. Ironically, for a holiday celebrating the Jews’ resistance to forces trying to assimilate them, each year Christmas-creep comes on stronger as gentiles look to make themselves more comfortable with traditions outside their own by framing Hanukkah as Jewish Christmas.

Hanukkah — sometimes spelled Hanukka or Chanukah (or even Chanuga or Xanuka) commemorates the miracle of the last drop of oil in the destroyed temple lasting for eight nights instead of one, so Jews mark it by lighting candles for the same duration. But other than that, Jews around the world (and across the U.S.) have about as many ways of observing the holiday as they do ways to spell it (basically infinite).

Suffice it to say, there’s some disagreement on how to honor the event — routine for a religion that never fails to supply evidence for the old saying, “Ask two Jews, get three opinions.”

Some Jews chafe at being wished on their way with a “ta-ta and Merry Christmas.” I delight in anyone saying goodbye to me in a manner not followed by “and good riddance!” But, while I appreciate people trying to make a straight one-to-one substitution with a “Happy Hanukkah,” it does get weird when the holiday, which begins on the lunar-monthed Hebrew calendar’s 25th of Kislev, starts in November (or ends in January). After eight days of eating the symbolic oil-drenched foods (latkes and doughnuts), my deep-fried brain is fresh out of ways to make it less awkward when receiving greetings for a holiday that’s been over for a week–or three.

Usually, I change the subject with something like, “Look at those pretty lights!” After all, it’s the dead of winter and say what you will about the deep religious meaning of either holiday, both come, at their root, from it being December and all of us having some low-level seasonal affective disorder. It’s the same reason Christmas colors are not navy and maroon and Rudolph pulls Santa’s sled, not Eeyore: to cheer us all the hell up. (Side note: “Rudolph the Red-Nosed Reindeer” was written by a Jew, as was “White Christmas,” “I’ll be Home for Christmas,” and many more, which should prove that Hanukkah songs are not a thing, since likely the only one you ever hear includes the words “funukah” and “marijuanicah.”)

There are not Hanukkah colors (blue and white are Israeli colors, and conflating Zionism and all Judaism is a whole problematic thing that your Uncle Google will explain better than I). No Christmas tree is ever a Hanukkah bush, even if you say it out loud enough that it almost seems to make sense, sort of like the word “funukah.” And the lights on your house are Christmas lights, even when you get the little multi-colored ones instead of just red and green.

But, you say, there are gifts! Well, yes, now there are.

Like Thanksgiving’s one-time move to the third Thursday in November, Valentine’s Day, and National Pepperoni Pizza day, you can thank the retail-industrial complex for that one.

Hanukkah does have some vague tradition around the handing out of gelt, or money (now often chocolate coins), but the gift-giving came about in the 20th century, mostly because American Jews lived in big cities, close to their Christian neighbors — and large department stores. Consumerism spreads faster than a case of crabs in a college dorm.

So fast, in fact, that Hanukkah took on a weird, swollen identity, pairing up with Christmas like the Bert to its Ernie. Only about 2% of the U.S. population is Jewish, and yet Hanukkah seems to be everywhere, as Americans attempt to show that the holiday season is not religious…by celebrating more holidays (Happy Kwanzaa, too, while we’re at it). The spirit is nice, but it ends up a bit like a gift with a card that has someone else’s name crossed out and ours scrawled on top.

Presents are more appropriately saved for spring, when Jews celebrate Purim, our traditional gift-giving holiday. If you’d like to wish a Jew a happy holiday, I recommend Purim, as it might score you an invite to an event that is combination Halloween (costumes), New Year’s Eve (raucous partying and drunkenness), and Christmas (cookies and presents). You don’t have to celebrate the holiday, but you can join in on the fun.

Which is basically how I look at Christmas: it’s not my holiday, and I’m not trying to turn my holiday into it. But I’m always excited to sit down with friends and celebrate, be it Purim, Diwali, Nowruz, …or Christmas.

If you like this article, please share it! Your clicks keep us alive!
Tags
Hanukkah
Christmas
holidays
religion
consumerism