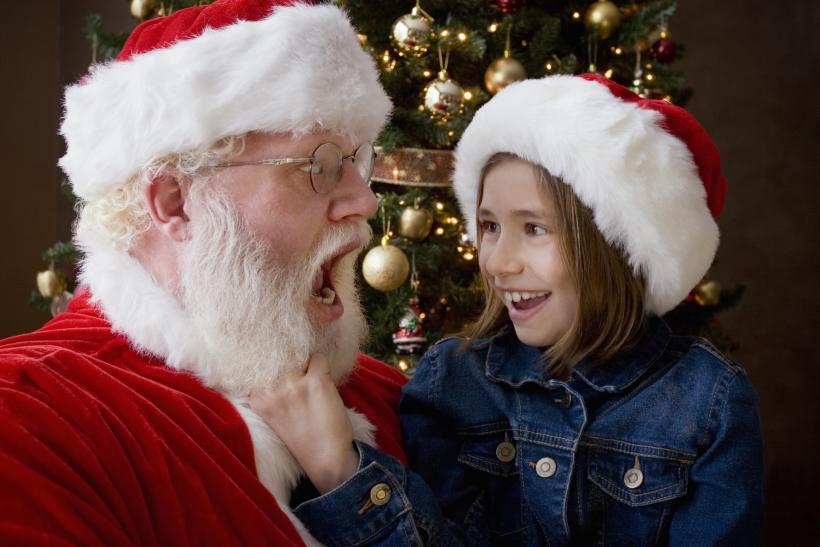 But now the jig was officially up. My daughter knew Santa isn't real.

The other day, I observed my eight-year-old daughter carelessly throw her American Girl doll on the ground and walk away.

“Hey! Please pick that doll up,” I was quick to bark. She did as was told, but not before hearing me mumble under my breath how “that thing was expensive, you know.”

Before I could think about what I’d done, or have time to undo it, my daughter whipped around and stared at me, mouth agape.

“Mamaaa!” she groaned, glaring me down. I felt like doing the most epic facepalm.

The gift had been from Santa, not from mom and dad. And at that moment, my daughter was certain of what she had occasionally questioned in years past.

“Oh, that’s right. Nevermind!” I said. I did an awkward little laugh and then waited for what I knew was coming — the question I couldn’t ignore.

“Mama, did you and daddy buy this for me?” she asked.

Slowly, shamefully, I nodded my head. Her next question was far more difficult to answer.

“But then why — then why did you lie?” she stammered, scrunching her brow and her shoulders at the same time.

I had to think hard about that one before responding. But when I did, I fumbled over my words. I said something about tradition and “holiday magic,” and how it’s fun to pretend. But even I had to admit that in recent years, when questions about Santa kept coming, it did feel more like straight up lying than anything.

My daughter has always had a strong imagination, but she’s also a bit of a skeptic, too. When she was two, she would ask me a thousand questions about how the Easter bunny got into the house. She nearly rolled her eyes at the idea of the Tooth Fairy, though on some level she believed (at least for the first couple of teeth).

Santa was the one thing she held onto, though I know she had her doubts about the bearded, jolly man, what with all the mall Santas, our lack of a chimney, and how he somehow always managed to find the same wrapping paper that we had purchased at Rite Aid.

But now the jig was officially up. My daughter knew Santa isn't real.

Had I ruined Christmas? Destroyed her sense of childlike wonder? Killed her holiday spirit?

Well, maybe a little. But somehow, I felt a huge sense of relief.

My daughter briefly walked outside, taking a few moments on her own. Then she came back to sit and chat, and I got the opportunity to explain why people feel the need to keep the tradition of Santa alive. I had the satisfaction of knowing that she could process it without feeling hurt later when she found out, likely from an older child, a television show, or some other way.

Even though I’d royally screwed up, after seeing how accepting she was of the truth, I was glad I had been honest.

As each year had gone by, I found myself going to greater and greater lengths to deceive my kid. It didn't feel good to lie, throwing more dirt into a pit I knew one day would be uncovered. On the other hand, being honest felt amazing.

I remember my disappointment at learning the truth about Santa. I was ten, and the feeling of utter confusion was striking.

“If my parents are lying about this, what else are they lying about?” I remember thinking.

Of course, my parents weren’t doing anything wrong — and I’m sure there had been plenty of dead giveaways, too. Once, an older girl told me Santa wasn’t real. I thought how mean and nasty she must be for trying to trick me. I was more gullible than my child, and I kept on believing in Santa, as some children do for many years.

I didn’t suffer long-term damage as a result. I didn’t resent my parents for keeping up the facade. But I did feel completely and utterly devastated that the Christmas magic was gone. I’d been believing the lie for so long that the truth stung more harshly than it might’ve otherwise. I still wanted Santa to be real. I wanted to believe that my father did always somehow hear jingle bells each Christmas Eve when no one else did, that Santa's reindeer ate the carrots I meticulously laid out, and that Christmas was that one time of year when magic was real.

This is why we do it all over again to our kids — we want a tiny bit of the magic back that we lost so long ago. And while I’m not faulting anyone, or myself, for playing make-believe, this year I feel thankful for the opportunity to share the truth.

Now, I can show my daughter a new meaning of Christmas while she’s still feeling merry and bright.

This year, Christmas might feel a little less magical for my oldest child. But instead of grieving Santa, I'll try and help her uncover the other kinds of magic that come with the holidays.

If you like this article, please share it! Your clicks keep us alive!
Tags
Santa
parenting
holidays
Christmas
mom
daughter