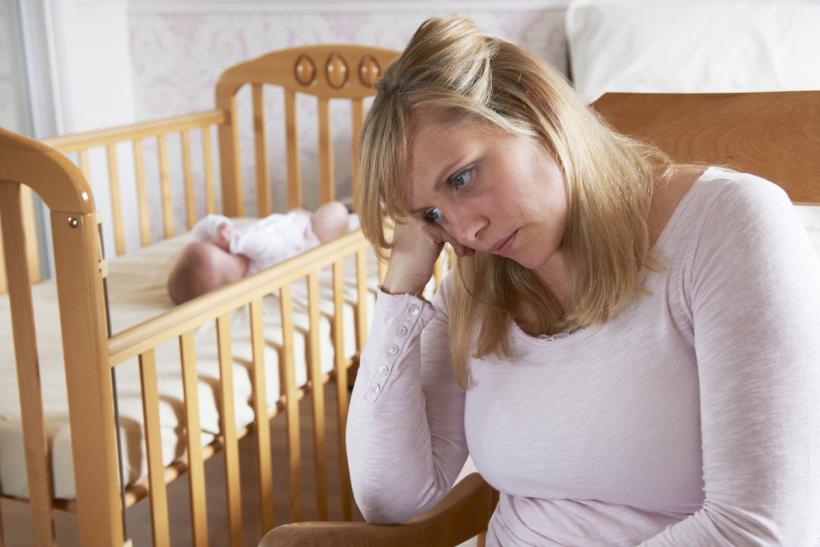 Mental health issues can be particularly difficult to speak of on their own, but postpartum mood disorders might be even harder to disclose.

While out with my family one evening at a local restaurant that’s popular for its budget bites and kids' playroom (aka entertainment so you can actually enjoy your meal rather than slamming it down your throat), I bumped into my old friend, Margot. My seven-year-old daughter had found another little girl to play with, so for a few minutes, we were free to talk about more grown-up things than who the newest American Girl doll was (Gabriela, by the way). As we balanced our two-year-olds on our hips and caught up over bites of questionable pizza and halfway decent beer, I nodded in solidarity as Margot revealed to me that becoming a mother had had its challenges. Slowly and cautiously, she opened up about her year-long experience with postpartum depression.

Margot had struggled long and hard, she admitted, and I instantly let her know that I could relate. I didn’t want her to feel vulnerable or alone, but more than that, it was true. I’d suffered from postpartum anxiety — a perinatal mood and anxiety disorder (PMADS) — after each of my children’s births. At times, I had felt like I couldn’t do it anymore — take a deep breath, be a mother, handle any of the enormous and crushing responsibilities before me each day. As we rehashed the troubling times, suddenly it all still felt scarily close to me. I could feel the weight of the lonely sleepless nights when my husband was traveling for work, crying in my bed and rocking a crying baby who refused to sleep, night after night and depleted day after day.

But what stood out to me most about Margot’s experience was how a lack of understanding from the women closest to her — her family members — had shaped it.

Margot admitted she had struggled to feel heard by the women in her life — her mother, her grandmother, her aunt — who also, not surprisingly, were the first people she tried to reach out to when she realized something wasn’t right. Her mother repeatedly brushed off her deep, dark sadness as if it were just a bad day, a bad month, even a bad year, when Margot attempted to talk about how she had been feeling: how she cried most days and had trouble finding the joy in being a mother. Often she was told that her experience was the same as everyone else’s and that she should try to embrace being a mother instead of complaining about it.

Eventually, her relationship with her mother became so strained that she chose not to see her anymore until the worst was behind her. She expressed remorse for practically cutting her mother off for nearly a year, but each time they communicated, she ended up feeling as if she was genuinely failing as a new parent.

She’d routinely been brushed off, told it was just “the baby blues,” and she began to fear to broach the subject with anyone else, even her doctor.

She never spoke outwardly about what she went through until recently, she said, and claims she will never have another child because of her fear of developing PPD again.

There is unquestionably more awareness about postpartum depression than there once was, but the dynamic between Margot and her mother still didn’t surprise me. I recalled how after I had my first baby, similar perceptions of how I was supposed to feel shook me, too — how the second I even hinted at an ounce of dissatisfaction, weariness or frustration, older mothers would scold me. “Don’t wish it away,” they’d warn, as if I’d committed a crime against my child by acknowledging that it had been weeks since I’d slept more than three full hours at a time and longer since I’d eaten a meal sitting down.

I felt rattled by the insensitivity. As my mental health wavered, I grew quieter about how I was feeling.

The idea that “this is just something women go through,” the same as childbirth or menstruation or menopause, makes it harder for mothers from another generation to hear the cries for help. They got through it and so should we, right? But just because our mothers and grandmothers weren’t diagnosed, or even aware they had a serious condition, doesn’t mean there wasn’t a serious problem.

By the time I had my second child, I knew who to turn to for support when the going got tough, and it wasn’t older mothers. It was new ones, regardless of their relatively slim realm of experiences with child-rearing. They were more knowledgeable about the issues in question, and thus, open to sharing and listening. But as a first-time parent, I felt hurt by the kind of uncaring attitude that often came from women who I thought were supposed to know better than me. It affected the way I thought about myself as a new mother — my weaknesses and my capabilities, things I was already grappling with in my vulnerable mental state. Eventually, I did seek help with my first child, but only because I thought I was suffering from a heart issue. Turned out the constant tightness in my chest and daily heart palpitations were symptoms of postpartum anxiety, which was made worse when my daughter fell ill, then recovered, at eight weeks old.

Mental health issues can be particularly difficult to speak of on their own, but postpartum mood disorders might be even harder to disclose.

About one in seven new mothers develops a postpartum mood or anxiety disorder, but only about 15% of them receive help for their condition. According to Postpartum Progress, there are about 850,000 mothers a year who are not getting the help they need.

Dr. Leah Millheiser, a Palo Alto-based OB-GYN, says that while times have changed in the past 50 or so years, there’s still a stigma attached to PPD itself and that women who come forward also have to face the fear of being judged or seen as inadequate. Some women may even be afraid of losing their baby to child protective services if they admit that they are struggling or feel incapable of meeting their baby’s needs, she says. Not to mention expectations that are put on new mothers are often unrealistic.

People envision a glowing new mother wrapped in baby bliss, and many may feel pressured to play the part.

Dr. Millheiser believes with increased awareness, some of which has come from outspoken celebrities, women who have every resource imaginable and were not immune to postpartum mood disorders, those expectations about “bouncing right back” are beginning to shift.

I’m not blaming my or Margot’s experiences on the bad advice we both received, but when it comes to mental health, that’s exactly what “suck it up” is. That mindset is still rampant, though, still trickling down to the next generation of women. When I asked mothers in a Facebook group if they’d ever experienced similar responses, I received a slew of emotional replies, most of which were a resounding “yes!” One member wrote, “This certainly rings true to my experience. I had so much trouble bringing my kid into the world, and ended up with severe PPD and PTSD (post-traumatic stress disorder) on top of a host of physical medical problems. My mom tried to be sympathetic, but all of her sympathies ended with ‘I had a really hard time too, and I didn't have any of the support you have, I just had to deal with it.’ "

It’s true that women just a few decades ago didn’t have much support, and talking about dissatisfaction with family life, at least in our grandmother’s generation, was certainly frowned upon. Doing so might make a woman, whose primary contributions were likely child-rearing, seem ungrateful. According to Dr. Millheiser, even doctors didn’t know what to make of women with postpartum mood disorders or how to treat them. “In the early 1900s, women with PPD were often subjected to unusual treatments or even institutionalization if they disclosed their symptoms.”

Staying silent became the more common approach, and mothers and grandmothers with dated ideas about the condition urged the next generation of mothers to do the same: power through, suck it up, but definitely keep that to yourself.

The idea that “this is just something women go through,” the same as childbirth or menstruation or menopause, makes it harder for mothers from another generation to hear the cries for help. They got through it and so should we, right? But just because our mothers and grandmothers weren’t diagnosed, or even aware they had a serious condition, doesn’t mean there wasn’t a serious problem. How many self-medicated instead?

I know my grandmother once revealed to me that she needed a handful of valium to cope with her babies, but she passed away before I became a mother, so I didn’t yet understand. Though I doubt she would’ve called it that, or even knew the terminology, she was, of course, talking about her struggle with postpartum depression and/or anxiety. She was an addict until her dying day, which could be at least partially blamed on the fact that being a functional alcoholic or addict was certainly more acceptable than being institutionalized for something like “female hysteria.” But the picture of the 1970s mother sipping martinis and smoking cigarettes with a baby on her hip did not come out of thin air. For many, it was a staple of their childhood.

Certainly, times have changed, and perhaps mothers have more support in their roles now (in some ways), but let's not pretend modern mothers have it easy.

All these years later, and all this information and this is one stigma that has stuck around. Perhaps it’s been passed down through the generations — the idea that we should keep quiet and play the part. But mothers are still sucking it up, the same as they ever were. Gone is the perfect 1950s housewife, but an image of her, working and child-rearing, with Pinterest projects oozing out of her ears, still exists — and she doesn’t have postpartum depression.

If you like this article, please share it! Your clicks keep us alive!
Tags
PPD
postpartum
postpartum depression
postpartum anxiety
new moms
infants 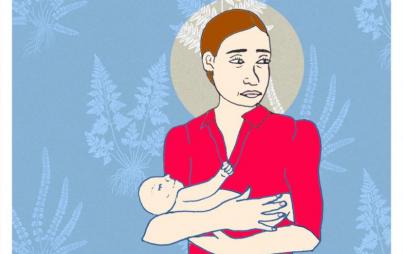 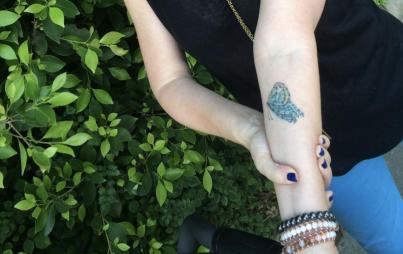 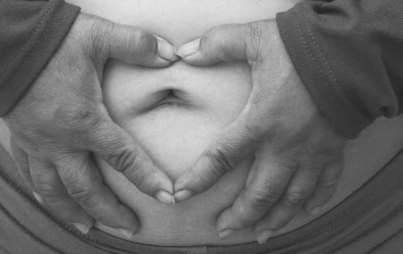 Learning To Love My Belly Jelly​ 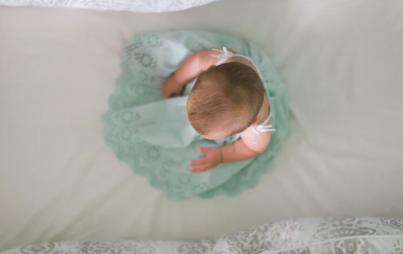