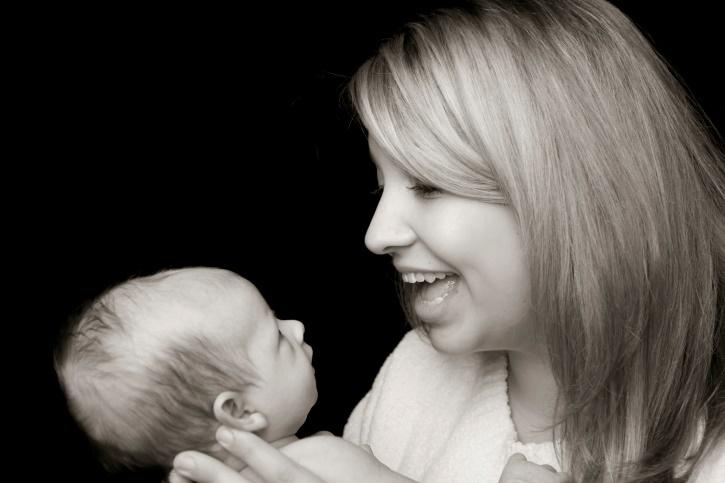 I've had to learn that while my daughter is the biggest part of my life, she is not my entire life.

When I was younger and pre-baby, I made a promise to myself: I would never become "that mom"—you know, the one who can't talk about anything other than her kids. I would avoid at all costs turning into, I shudder to say the term, a Momsversator.

There is exactly one word to describe moms like this. And that word is boring.

This commitment I made to myself was all well and good . . . until the actual having of the baby occurred. At this point—pumped up on hormones, pumping out milk, and invigorated by the act of wiping my daughter's butt—I suddenly became unable to talk about anything but my newfound motherhood.

For a while, this wasn't much of a problem. But after my partner suggested, for the 100th time, that we consider inviting some of our pre-baby friends over for dinner, I found myself entertaining again—and everything went south.

You remember entertaining, right? In case you need a refresher: Entertaining is the act of inviting adults into your home for witty repartee, good food, and copious amounts of booze.

Our first guests were a successful attorney and accountant. Big Things were happening around us, and they wanted to talk about them. But when I opened my mouth, all I could do was vomit out "baby." Sleep schedules, baby shit, parenting style debates, the validity of the Time-out to Act-out Continuum Theory . . . all were topics I was comfortable espousing on.

As for everything else? Nothing. I hadn't read a newspaper in months. The only "news" I could talk about dealt with American Association of Pediatrics guideline revisions. That, and the various liquids oozing out of my daughter and myself.

Our guests remembered the former me, and you could see the disappointment in their eyes every time I Momversated. (Yes, they are patient, good friends. No, they didn't mind listening to me—they just weren't interested.)

I kept trying to say something compelling, opening my mouth like a fish sucking air. Nothing but Momversations came out.

Finally, I just shut up.

It was at about this point when I wondered: What's happened to me?

When I was pregnant, I never planned to stay home. Then my daughter arrived, and with her arrival fled all career-related desires.

I decided to become a part-time Work At Home mom, aka WAHM, and began seeking "great mom" status with the dedication of a prizefighter.

My working mom friends were surprised. They just couldn't understand—and frankly, neither did I. Should I have gone back to work, full-time? Absolutely. Was the loss of my income a pretty big hit, in an already crappy economy? Yep.

Did I care? Nope.

I was addicted to the Momversation. I liked feeling empowered, important, knowledgeable, needed. A friend nicknamed me “Mama Guru,” because I became the one-stop shop for anything and everything baby. I was the uber-breastfeeder who memorized The Womanly Art of Breastfeeding, the car-seat safety freak who helped friends install seats correctly, the mom who was thrilled when you texted, asking how much longer the sport baby-carrier shoulder straps were compared to the original (3” and yes, true story).

For those first couple of years of my motherhood, my dedication to mothering was my sole contribution to society. It was consuming, wonderful, and productive. But it was around the time of the dinner party Momversation flame-out that I realized it had also overwhelmed who I really was.

Some of what I avoided was for the best. Some of it wasn't.

Slowly, I began accepting that while my daughter is the biggest part of my life, she is not my entire life. Turns out, the real me hitched a ride outta town with the delivery-day stork.

The real me couldn't hide forever, and I've begun to connect with her again. The real turning point, after the dinner party, came when a very cool working-mom friend invited me to a monthly GNO (Girls’ Night Out). Looking around the room, I realized these strong, sexy, intelligent women had something else in common—almost all were moms. Some worked 80 hours a week, some 10, but all found a balance that worked for them. Inspired, I removed Facebook from my phone, just long enough to detox off the mom groups (detox, not give up). I ran my first 5K. I started taking time for the things I enjoy, from Proust to Gilmore Girls reruns. And I began channeling my desire to help mothers through writing.

Pre-Momversation Me isn't escaping that easily, though she'll get some time off if the stork decides to make another delivery. Until then, I will ration my Momversations, and enjoy being all of me.

Bring on the dinner party.

If you like this article, please share it! Your clicks keep us alive!
Tags
mom
motherhood
mom talk
advice
tips
independence
stay at home mom
essay