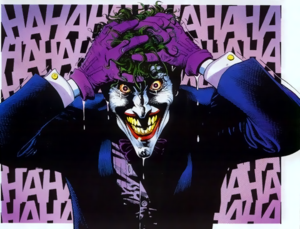 Men are upset because women objected to having a character meant for them fed to a veritable black hole of characterization. The Joker is where ideas (and characters deemed non-essential by DC’s editors) go to die.

I’m not scandalized by the outcry against pulling the variant cover of Batgirl #41. The role of discretion in making art accessible to its intended audience, and how to navigate the power dynamic of creator and participant, is an important discussion, one I’d much rather be having than last night’s impromptu symposium "How Many Photoshopped Pictures of Batgirl Being Stabbed or Sexually Assaulted Do I Need Tweeted at Me Before I Set My Account to Private Again?”

Do readers have rights? Does the intended audience (and as Erik Larson will lament, men are not the target audience of Batgirl) have legitimate claim to sway the direction of media? I want to have these discussions. I’m not angry with men for trying to engage this topic, or for their heavy-handed “equal rights, equal lefts, am I right?” heel-digging into the most un-nuanced facet of the argument.

For me to be right, someone must be wrong, and how thoughtful, they formed a queue. And if a single person in this serpentine of social illness coiling around us actually loved Batman, I might find my smile in all this philosophical bloodshed, all in contention over a woman's right to criticize depictions of sexualized violence, in a comic book intended for a women's audience.

Swaying our gaze to the wayback, past The Killing Joke—the Joker is Batman’s least interesting, least complex, and most unnecessary villain. He isn’t trying to spare his wife from a freak disease. He’s not asserting himself in the face of childhood trauma, he’s not compelled by a loyalty to the planet that overwhelms his very humanity—he doesn’t even have a consistent backstory.

He can’t be rehabilitated. He has no meaningful relationships, no motivation beyond malice on repeat.

The Joker is impervious to closure—the only element of his character that is susceptible to change is his body count.

It’s important to remember that all this debate is launched by a character whose total lack of empathy was cited by one of the actors who portrayed him as a central tenet of his personality.

This is not a tempered discourse over Batgirl being sexually assaulted by someone she trusted.

Men are upset because women objected to having a character meant for them fed to a veritable black hole of characterization. The Joker is where ideas (and characters deemed non-essential by DC’s editors) go to die.

Women rightfully rallied against a character made for them turned into a casualty of pointedly meaningless violence. Kidnapping and sexually compromising Batgirl at the hands of the Joker serves no purpose but to tantalize the rubbernecking mind.

When you dress like the Joker from that scene where he blows up the hospital, when you put Heath Ledger’s lines from The Dark Knight in your Twitter bio, you are making clear where you place your emotional investment. Not in the developing drama of the page, but in the thoughtless loss of fictionalized life. You’re only here to gawk at the corpses.

You leer at the women in Batman, who you deem “lesser characters,” and you lick your lips in anticipation of their anguish.

Batman (probably) wouldn’t tweet pictures of mutilated women’s bodies to twitter feminists (at the very least, he has a butler for that shit). When you send death threats to women, over the entitlement of a Batman-universe villain to vividly degrade a heroine without fear of critique or repercussion from the very readers of that heroine, you are making it clear who in this story you aspire to be.

The heroes in this story would not recognize you as one of their own, and your admiration, without reservation, of the Joker makes you the sort of contemptible expendable that he’d kill, without thinking. You’ve read the books, I assume. The Joker never lets his henchmen live long enough for him to process payroll.

You’re not edgy, you’re not contrarian. You’re fodder, by the standards of the fictional universe you fancy yourself an advocate and defender of.

You probably wouldn’t even get a wacky one-liner. You’re dying on a hill in a world that thinks of you as the lowest common denominator--a world created by men eager to capitalize on your conditioned appetite for misogyny.

Why such a wanton need to see women in pain? And did you really think that overwhelming my social media mentions with mutilated women’s bodies will make a woman talk to you, or reignite the flame of infinite possibility that once laid before your father or grandfather, back when the laws were more explicit in their limiting of women?

All this toil, late into the night—but it won’t be you who benefits from your labor. Who profits from your cheap, predictable tantrum tactics? Lazy writers and editors afraid of change.

You like how the Joker falls over himself in laughter at the genius of his own crimes? Then you’ll love Frank Gorshin’s Riddler from the ‘66 Batman TV show, whom all Jokers of the silver screen have raided for inspiration. The Joker is an incomplete character sketch, filling in the gaps with the successful mannerisms of less profitable villains who don’t cater to body count quotas.

You can wrap yourself in the flag of anti-censorship, but it’s not where you’ll be buried.

You want to fight feminism? Read up on Jezebel offering a bounty for unedited photos of Lena Dunham. Or the way some organizations brand themselves as “feminist” to get all that “I hope I’m changing the world by donating to you” money but ultimately do nothing for the women (and men) that feminism claims to aid.

This—crying because you can’t buy the Joker making a young woman cry in fear—is not equality. This is not fighting feminism. It’s obfuscation. What is it that you really want and expect from Batman and Batgirl comics? Why do you want that? Where do you think you developed these needs? And who profits from providing you those needs? Do those people see you as “their brethren” or as part of a different sort of body count, one that sustains an industry in fear of change?

If you like this article, please share it! Your clicks keep us alive!
Tags
Sexual Assault
violence against women
misogyny
the Joker
variant covers
feminism
Batgirl
Batman
comics