"Eat, Sleep, Rape, Repeat" Shirt At Coachella: More Than One Man In A Tee 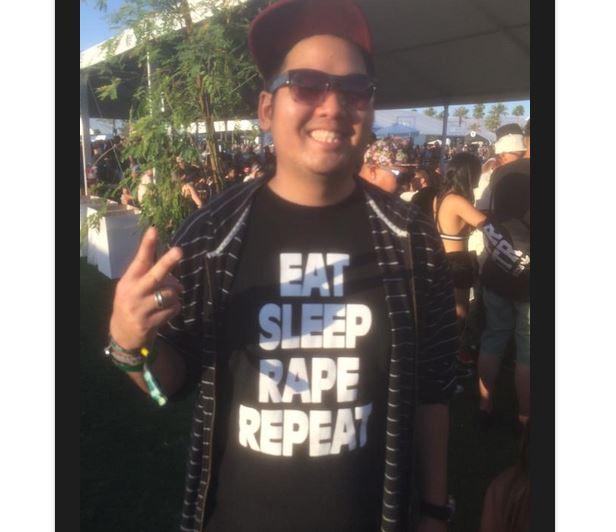 This isn’t about about one man and his abysmal fashion choices, but a symptom of a much wider-ranging and graver problem.

Okay, so the last one isn’t technically an official Coachella 2015 headliner—but it’s definitely been a powerful force at the music festival, nabbing quite a few of its own headlines.

While often the term rape culture feels like an amorphous, swirling cloud, sometimes it’s encapsulated in a searing, sinister visual. As it was on Sunday with this photo and tweet:

This guy wins the award for worst fashion/lifestyle choices at @coachella. I'm not easy to offend, but this is shitty pic.twitter.com/fyjod24nAx

Captured by Jemayel Khawajahoto, the managing editor for Vice’s music site THUMP, the tweet and image quickly went viral, outraging millions with its appalling flippancy regarding sexual violence as embodied both in the despicable shirt (a play on the Fatboy Slim song "Eat, Sleep, Rave, Repeat") and the wearer’s easy grin and flashing of deuces.

An article at The Frisky wrote about it under the title: “Kill It With Fire: This Coachella Attendee’s 'Eat Sleep Rape Repeat' Shirt.” Refinery29 weighed in, dubbing it “The Worst Shirt That Has Ever Existed,” saying, “In most cases, a provocative, statement-making sense of personal style is something to celebrate. There's a line somewhere, though, and this guy is approximately a million miles over it.”

Buzzfeed echoed Refinery29’s assessment, calling the shirt “The Worst Thing In The World,” doubling down in the subtitle to confirm: “Yes, THE ENTIRE WORLD. Not just at Coachella.” Pondering whether the shirt could possibly contain a typo or be a work of photoshop (a theory that’s been widely debunked), the author of the piece concluded with: “All we know for now is that it looks as though there is a real-life person, out there in the universe, that thinks wearing—and owning—this T-shirt is OK. Note to you, whoever you are: It’s NOT.”

Jezebel identified the wearer of the shirt as a “shithead of a specimen” and an “imbecile”—which seems to be one of the predominant consensuses of Internetland.

If only the issue were limited to this one “godawful douchebag.”

Unfortunately, and what is often overlooked by the singular condemnations of a man wearing an atrocity of a shirt, is that this isn’t about about one man and his abysmal fashion choices, but a symptom of a much wider-ranging and graver problem.

According to author and sociologist Dr. Chauntelle Tibbals, this is not a case of “one man and everything else is fine.” For starters, she laid out for me, we must consider all the wide-ranging choices that went into the shirt:

“Someone had to print the shirt. Someone then had to sell the shirt. Then someone had to purchase the shirt, wake up in the morning, climb out of bed, decide to put the shirt on, and then make the decision to go to the concert while wearing it.”

“Sure,” says Dr. Tibbals, "it is one person, but it’s troubling to think about how many people had to approve of this shirt and message before someone even had the opportunity to take a picture of it at a festival.”

And while it’s fine to condemn and call out one so-called wayward douchebag, the great societal context of this shirt is what’s more important to consider. “We work within a larger context of history and culture. Memes, viral videos, little flashes in the pan—they’re actually pieces of evidence of bigger things happening societally.”

Consider: how many shirts are we not seeing? That get worn every day? And more troubling: what do such fashions and their flippant attitudes about rape tell us about the culture we live in?

It’s all pieces of a complicated and sinister puzzle—one whose real nature is challenging to suss out. “The truth is, it’s very difficult to get an accurate picture of sexual assault in 2015," says Dr. Tibbals. Rape culture, a culture where sexual violence is normalized with devastating consequences for women and gender-variant folks as well as for men, is an overarching phenomenon that obscures how common sexual violence really is. “How prevalent is rape and sexual assault? The disturbing fact is that nobody knows. Rape culture keeps things quiet and obscured."

Calls from those that "one shirt" isn't that bad, that one dude wearing a shirt is, on the spectrum, "not that bad," underscore this phenomenon and trivialize the troubling cultural context.

On the verge of Coachella's second weekend, what can we do to call out such problematic elements of our society? "Combating rape culture is a huge undertaking, but everytime the conversation is challenged, it all adds up. Drawing attention to the issue—whether through calling out friends, demonstrating, volunteering, or advocacy all helps."