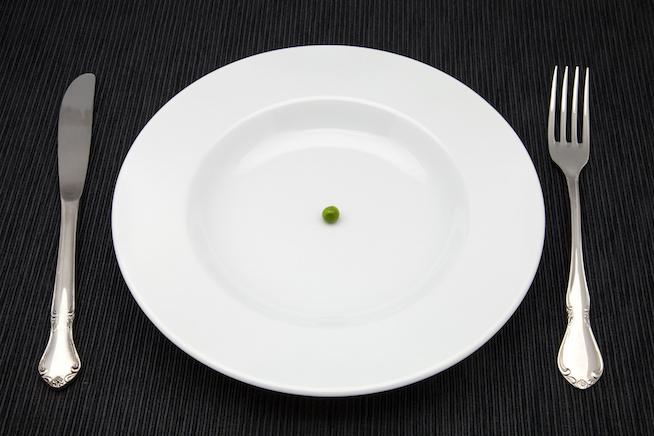 These kinds of lists — “X Amazing Facts About Blah-Blah-Blah That You’ve For Real Never Heard Before!” — usually don’t deliver on their titles’ promises. Instead of walking away feeling forever changed with the new knowledge that’s been bestowed upon you, you leave dejected, mumbling “No shit.”

I feel that way about lists that boast “Never Before Published Eating Disorder Facts!” They’re all the same: Not only women suffer from eating disorders; anorexia nervosa is the most deadly mental illness; eating disorders don’t discriminate based on race, class, or size. Yeah, yeah, yeah.

And it’s not that that information isn’t important. It’s actually desperately necessary for us to digest (uh, no pun intended) and take into consideration. Tired old eating disorder myths really do hurt people.

So here’s my attempt to tell you — someone on the outside, looking in — a few things that maybe you really don’t already know about eating disorders.

Don’t get it twisted: No one wins at this game.

But we do self-police which eating disorders and behaviors are “better” than others, and the criteria are mostly predicated on two measurements: 1) Who’s taking in the least amount of food? And 2) Who’s the sickest?

And the reason why it’s impossible to win?

Because the prize — being the “best” at your eating disorder — quite literally is death.

Yes. Death is considered the marker of your superiority, of your transcendence, of your salvation.

I’m assuming you’ve read other lists of “Mind-Boggling Facts About Eating Disorders, Revealed” and therefore already know that there’s such a thing as being pro-ED (or pro-ana or pro-mia). In case you didn’t, let me enlighten you: There’s such a thing.

And although I could spend the rest of my life counting the ways in which this is terrifying (think: message boards filled with people giving tips on not only weight loss, but also how to hide it from your loved ones and doctors), one of the most bizarre parts is how it’s rooted in religious discourse and ideas.

And it actually starts with mainstream culture at large and our penchant for dividing foods and behaviors into “good” and “bad” — moral and sinful. “I was good today because I only had one slice of pizza” and advertisements for “Sinful Chocolate Lava Cake” is where this begins, and the pro-ED movement takes it several steps further.

It goes from language around “purity” and ridding oneself of sin in the form of food to thinking of starvation as a sacrifice or purging as penitence. Throw in a whole lot of angel imagery and lists like “The Pro-Ana Ten Commandments,” and you’ve got yourself a cult-like dedication to mental illness.

I often tell people that this is how I know that eating disorders are mental health issues, and not just behavioral flaws: because fearing food — something that your body literally needs to live — is like fearing air. Fearing eating is like fearing breathing. And of course, that’s absurd.

A lot of the time, fear foods make sense. They’re things like ooey-gooey, cheesy pasta and cinnamon rolls dripping with icing. They’re high-calorie, low-nutrition foods. Sometimes, they’re more personal. I, for example, had a really hard time coming face-to-face with Reese’s miniature peanut butter cups when I started recovery because, toward the end of my eating disorder, I started binging on them. Other times, they seem ridiculous: carrots because the crunchiness hurts or apples because the peel can get stuck in your teeth.

Safe foods, on the other hand, are basically the opposite of fear foods: They’re literally foods that we feel safe eating under almost all circumstances. They’re the foods that we can always go to without crushing guilt or shame.

Similar to fear foods, sometimes these make sense, and sometimes they feel counterintuitive. For example, bland, low-calorie foods (like saltines or cucumbers) often feel safe for people. But sometimes what feels safe is Mom’s famous baked macaroni and cheese because your brain has been wired already to associate that with comfort.

And most foods exist somewhere on this spectrum of safe to fear, sometimes without much logical reasoning.

The point is that eating disorders affect your relationship with all food, but some more than others.

4. There’s a System to Self-Induced Vomiting

Skip this now if the idea of forcing yourself to throw up makes you feel sick. But a lot of people think that bingeing and purging is absolutely out of control and without any forethought, but that wouldn’t actually be accurate.

People who binge and purge are keenly aware of how to do it in a way that, to them, is “effective.” It’s not all random.

5. You Never Have to Self-Induce Vomit to Be a Purger

If you ask the average person to define bulimia for you, they’ll tell you that bulimics “throw up” their food. And that’s actually not accurate.

First of all, one of the criteria for bulimia nervosa includes bingeing first — not eating normally, and then purging, although that’s still disordered.

And secondly, “purging” does not have to mean “throwing up.”

Purging, by definition, means to get rid of or clear out. That means that purging can also happen through, for example, excessive exercise or laxative abuse, among other behaviors.

Narrowly defining “purging” as “throwing up” can be really dangerous. Because if your only go-to tactic for figuring out if your best friend is purging is to listen by the bathroom door when she goes in post-meal, you’ll never actually figure it out.

6. Eating Disorders Are Categorized By Obsession and Compulsion

A common response that folks struggling with eating disorders hear is something along the lines of “Just eat,” “Just stop purging,” or “Just stop overeating.” And that’s akin to telling someone with depression to “Cheer up” or someone with anxiety to “Calm down.”

That is: It’s not effective. At all. It’s actually kind of offensive.

Eating disordered behavior happens because we actually can’t stop it that easily. We have irrational obsessions and/or uncontrollable compulsions that lead us to engage in the behaviors that we are. And you can’t fix that with a snap of your fingers. If only it were that easy.

Eating disorders are complicated — incredibly so — and that’s a fact that you won’t garner from your average “Facts About Eating Disorders” article. But there’s a lot more to them than meets the eye. And the sooner we’re willing to dig deeper, learn more, and understand their complexities, the sooner we’ll be able to treat (and hopefully, eventually, eradicate) them.

If you like this article, please share it! Your clicks keep us alive!
Tags
ED
eating disorder
anorexia
bulimia
ED recovery