Ask A Feminist: What Is Intersectional Feminism? 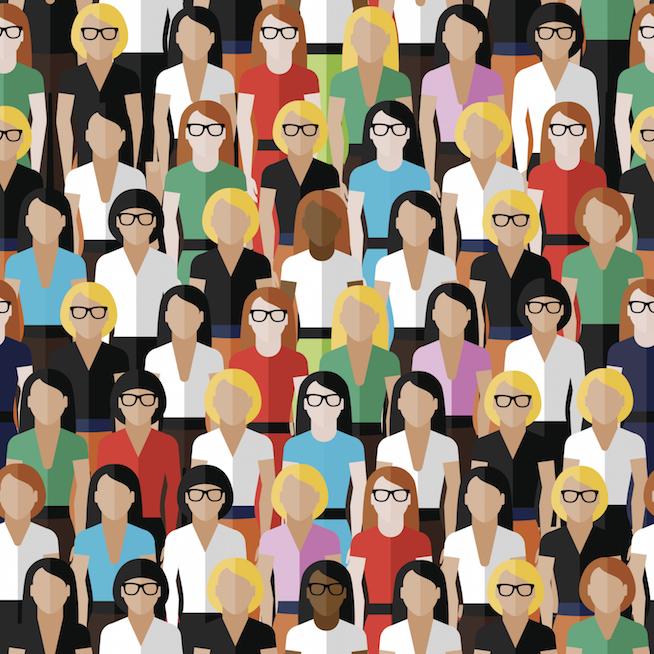 All the Twitter feminists talk about “intersectional feminism.” It sounds really smart and like something I should be doing to my feminism (unless it’s anything like vajazzling, which I won’t do on principle). However, I don’t know what it is and I don’t want to ask because I’m afraid the other feminists will laugh at me. So what is it?

Ah, yes. The mysterious “Intersectional feminism.” I, too, may have had to sneak in a quick sidetrip to The Google to make sure I understood intersectionality before I could decide if I could or should integrate the notion into my personal brand of feminism. But once I grasped it, I was all HELL YEAH, FEMINISM SHOULD BE INTERSECTIONAL!

For starters, let’s use a boring academic definition taken from Wikipedia:

Intersectionality (or intersectionalism) is the study of intersections between forms or systems of oppression, domination, or discrimination. An example is black feminism, which argues that the experience of being a black woman cannot be understood in terms of being black, and of being a woman, considered independently, but must include the interactions, which frequently reinforce each other.[1]

This feminist sociological theory was first named by Kimberlé Crenshaw in 1989, though the concept can be traced back to the 19th century.[2][3] The theory suggests that — and seeks to examine how — various biological, social and cultural categories such as gender, race, class, ability, sexual orientation, religion, caste, species, and other axes of identity interact on multiple and often simultaneous levels, contributing to systemic injustice and social inequality. Intersectionality holds that the classical conceptualizations of oppression within society, such as racism, sexism, biphobia, homophobia, transphobia, and belief-based bigotry, do not act independently of one another. Instead, these forms of oppression interrelate, creating a system of oppression that reflects the "intersection" of multiple forms of discrimination.[4]

Still not clear? Let’s try this: the enemy of my enemy is my friend. The same systems that hold women back also hold back people of color, people with disabilities, people who are sexual minorities, people with minority gender identities, and people of different religions. We all have to fight the power together because it’s the same damn power.

Understanding that systems of oppression tend to cast a wide net is the easy part. Next is the hard part: How do we as feminists work to position ourselves within the intersection of marginalized peoples and make sure we’re working with them, instead of stepping on them to get ahead?

For me, the wake-up call moment was when I read that the first-wave feminists of the '60s campaigning for the right of women to work (or work higher-level jobs) did not notice that women of color already worked and always have worked. Moreover, they often worked at jobs way lower on the food chain than "secretary," which was about the best position white women of the time could expect to hold. Did first-wave feminism help the women of color have more opportunities? Sure, because a rising tide carries all boats, but it wasn’t as intentional as it could have been. Being conscious of the intersection of the female experience and the experiences of women of color means knowing that white women get 77 cents on the dollar compared to men, but black women only get 64 cents. Hell, black men are only getting 75 cents on the dollar. When we start talking about wage equality, we need to talk about WAGE EQUALITY. Don’t just lobby for the white girls who look like whatshername on Mad Men. This is about all the girls, and a big chunk of the guys, too.

Moreover, intersectional feminism should mean that you step up for others when they need allies. White feminists need to stand shoulder to shoulder with black mothers who are terrified of their kids getting shot by cops. Cisgender feminists need to help pass laws that let trans women use the right bathroom. Straight feminists need to step up and tell their ignorant cousin Cletus to stop using words like “faggot” or “dyke” on Facebook, because homophobia is gross.

There does come a moment when you start to wonder if all this intersecting is leading us away from classical feminism and into a more humanist model that focuses on giving all people equal footing. To that I say yes, but that’s not bad. Working for the betterment of everyone’s life should be the goal of every social movement.

We don’t exist in a vacuum. Rather, we live at the intersection — see what I did there? — of our collective experience. That intersection is the place where we can gain the power we need to implement the goals of feminism, and civil rights, and gay rights, and trans rights, and human rights. Your feminism should be intersectional, because intersection leads straight to the heart of the world.

If you like this article, please share it! Your clicks keep us alive!
Tags
feminism
intersectional feminism
gender
race
sexuality