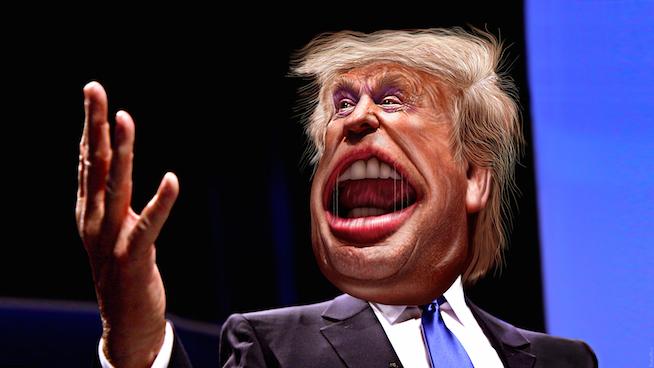 " out of that mouth comes the same caveman rhetoric that Berlusconi peddled years ago."

You can almost imagine Trump’s lines as a listicle — something like “Quickest Ways to Enrage and Alienate Women.”

Donald Trump’s remarks about women sound like that old, perverted uncle from Bridget Jones. He’s that weaselly man of a certain age who feels no need to hide his genuine, jovial misogyny. Trump has called individual women “fat,” “disgusting,” “slob,” “unattractive.” Recently, he tweeted that listening to Carly Fiorina’s voice will give you a “massive headache.”

You can almost imagine Trump’s lines as a listicle — something like “Quickest Ways to Enrage and Alienate Women.” You also probably know someone who resembles the stereotyped “creepy uncle” character Trump represents. And maybe you, like many have reported, have been baffled that you’ve come to find a kind of acceptance for this guy’s commitment to the good old days of the Good ‘Ol Boys. After all, he belongs to a dying breed, right? Not much harm in letting him wheeze out a few final, almost-comedic lines about how good some chick might look on her knees since he won’t get elected anyway.

But Trump’s stratospheric rise in public polls has got me thinking about the possibility of him actually being elected and what that would mean for American women. And I can’t help but be reminded of the similarities between Trump and the former Prime Minister of Italy, Silvio Berlusconi.

When I was in college, Berlusconi also made headlines with his absurd remarks like, “The women of the Right are certainly the most beautiful … the Left has no taste, not even when it comes to women.” I’d think to myself, “Wow, what a ridiculous man you are, and what a strange country Italy must be that you could be its leader. What’s going on over there?”

In addition to his remarks as Prime Minister and as the former (and current) owner of Mediaset, Italy’s major television network, Berlusconi sexualized women on public programs by parading them in bikinis during entertainment shows and evening news programs alike. For reference, the ownership of Mediaset would be akin to PODUS owning NBC, ABC, and CBS combined.

The situation for Italian women of a feminist bent looked dire. A recognition of the need to change attitudes toward women led Lorella Zanardo and Loredana Lipperini to film a documentary and write a book, respectively, addressing the problem. As the New York Times summed up, “…what concerns some observers here is that the emphasis on physical attractiveness as the principal prerequisite for success may be corrupting younger generations.”

Since Donald Trump announced his 2016 run for the presidency, comparisons between him and the former Italian Prime Minister have abounded. Both men are independently wealthy to the tune of billions. Both men have an unusually high opinion of themselves, and both feel peculiarly free to express it.

A far more disturbing similarity is their open belittling of women.

Looking at Berlusconi’s Italy, American women might rightfully foster a genuine fear of Donald Trump, and what he means for feminism’s future. After all, this is the man who owns the Miss USA pageant, claimed Fox News host Megyn Kelly was hard on him because of her period, and suggested he would probably be dating his own daughter if, you know, she wasn’t his daughter.

Yet heaping all the blame onto The Donald is too easy. What should be of more concern are all those people behind the polls. Who are these Americans throwing their support to Trump? What is compelling so many to overlook his outrageous attitude toward women? Some pundits claim it’s merely his outsider status, that voters are oh-so-over political correctness. They appreciate his brash, unfiltered mouth.

But out of that mouth comes the same caveman rhetoric that Berlusconi peddled years ago. If so many millions of men (and women) find such sexism commonplace and inoffensive, it is due time for feminists to sound the alarm. Loudly and without ceasing.

No politician can hope to win the presidential nomination, let alone the general election, without widespread female support. Women vote in greater numbers than men, so their votes are indispensable.

But feminism needs — and has always needed — men on its side. The lesson from Berlusconi’s Italy is that a willfully base leader tends to have a corrupting effect. Men feel less inhibited to objectify females. And not all women — especially impressionable youngsters — will stay forever immune. For Italians, the apex of female ambition eventually became their physical attractiveness. As the New York Times pointed out about Italy circa 2009, “Magazines for teenage girls . . . regularly query their readers on their showgirl skills rather than their intellect.”

Ring a bell? Sounds curiously like a beauty pageant to me. Let’s ensure that history doesn’t repeat itself.

If you like this article, please share it! Your clicks keep us alive!
Tags
Trump
Berlusconi
feminism