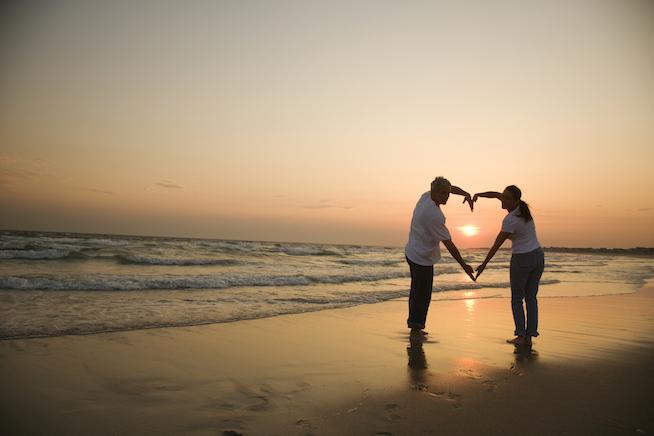 "I love you" was on the bathroom mirror as I looked up from washing my face, and "I like when you're right" was on the wall above the coffee maker.

My boyfriend and I first met online a year ago while we were living 3,000 miles apart. We spent the first three months of our friendship in the realm of text: we Facebook-chatted, emailed, texted, and wrote letters. Through written words, we got to know and care for each other deeply. I maintain that our physical distance allowed us to become closer on paper (or through screens) more quickly than we would have, had we been physically proximate.

Much of our early communication was digital, but the messages we sent weren't the shorthand text messages that often get blamed for the downfall of human connection. Many of our texts were multi-paragraphed, and we wrote to each other thoughtfully. I was constantly shocked by his ability to read my tone through the screen, as well as by his ability to make me laugh out loud involuntarily.

We also wrote letters to each other by hand. Some of these letters were sent through the mail. Others were too urgent to send via snail mail, so we'd snap photos of them to send each other instantly. Once, I sent him a jar full of slips of paper I'd written on, at least 70 or 80. These slips of paper included reasons I loved him, things I wanted to do when we saw each other next, and tiny thank you notes for the influence he'd had on my life.

Our intention in sending these things was to begin a practice of expressing gratitude for our relationship: Often, I'd receive one of his letters at the end of a stressful day and immediately feel grounded, even if it was a simple message with just a few words. These letters were something tangible we could return to, and we often do. We live together in Brooklyn now, and it's fun to reread old letters and see the evolution of our relationship, played out on paper. Though we have the option to say, "I love you," whenever we'd like (and we do!), we've continued our practice of writing love letters, thank you notes, and more.

One morning, after I'd had a particularly hard night (full of tears and self-doubt over whether I'd find a job in New York), I woke up to find Post-It notes placed throughout the apartment. Many of us who grew up watching Sex and the City learned that Post-It notes are not a suitable medium through which we should express our feelings. We learned, rather, that they are a symbol of thoughtlessness; that their use in intimate communications implies lack of regard for the feelings of the recipient. However, these notes were proof that the medium doesn't matter, so long as the love and gratitude is there. They said things like "I think you're funny," "I'm proud of who you are," and "Thank you for walking the dogs."

Though the things he wrote on those blue sticky notes were things he told me often verbally, it somehow meant more to see them written. "I love you" was on the bathroom mirror as I looked up from washing my face, and "I like when you're right" was on the wall above the coffee maker. I was instantly reminded of how we'd connected in the first place, and I started crying again — this time, for a good reason.

No relationship is immune to the pitfalls of routine. No matter how much love exists between two people, without gratitude, it fizzles. As we've settled into a routine and gotten used to the idea that we get to spend each day together, we are also aware of the potential this creates to take one another for granted. Because of this, our communication is constantly evolving to make sure we remain thankful and present; however, we never quite move on from the old way. We simply add new tricks and find new ways to thank each other for existing. A tiny love letter, even on a Post-It, can go a long way.

If you like this article, please share it! Your clicks keep us alive!
Tags
love letters
love advice
relationship advice
Love

I Was Diagnosed With ADHD As An Adult
Rosemary Donahue

5 Ways To Stay Sane While Being Unemployed
Rosemary Donahue