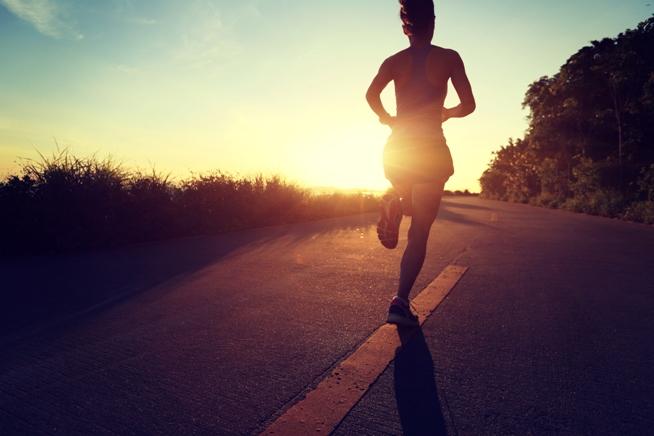 For two months, missing the medication that had saved me from myself, running filled in the crevices of my brain.

My sister is the athletic one.  I’m a year older — the bookish one — and the third sister, two years younger than me, is the artist. We're so close together in age that I understand why we ended up so different from each other, so early on. Even though I loved sports like gym hockey and soccer, getting me on teams wasn’t a priority. I had to be the odd one out on my sister’s soccer team: a year older than everyone else, and the only one growing breasts.

For years I said I wouldn’t run even if I was getting chased by a bear. I grew up in Alaska, and we joked on family hikes that you only have to be faster than one person to avoid getting eaten.

A few years ago I decided to stop taking the antidepressant that had been part of my life for fifteen years. It had saved me and entirely changed me, from someone stuck in darkness to one who could see the light in life. But now that I was past 30, I thought I might finally be able to get by without it. I did it smart, tapering down my dosage over the course of two months.

At the same time, I met someone new to town who mentioned wanting a running buddy.  Something came over me and I agreed to join her (August in the Arizona desert is over 90 degrees even in the middle of the night). And one dark, steamy morning at 5:30 a.m., we dove in.

The first three days seemed like a cruel joke. I was doing this voluntarily? What on earth was I thinking?

Then, on day four, I caught a glimpse of something. I couldn’t put my finger on it exactly, and worried I was hallucinating from dehydration.

Then it happened again a few days later.

I felt purposeful and strong. I was beet red and breathing hard at the end of our three-mile course, but I didn’t want to quit. At the end of my new friend’s driveway, I asked her if this was how she always felt after running.

“Not all the time. But enough that I keep doing it,” she answered with a huge grin.

She warned me the next day would be hard and disappointing. She wasn’t wrong.

Where was my breakthrough?  My triumph?

For two months, missing the medication that had saved me from myself, running filled in the crevices of my brain. It didn’t fix everything — I was still full of tears at least once a day. I could recognize what was happening though, and not be consumed by it. My mind and body were working together in a way I’d never experienced before.

I tried to chase the high, depending on running to "fix" my chemical imbalance, and overdid it. I cried at the podiatrist’s office — not just because I was in pain, but because he told me I needed to take a month off.

Then he showed me pictures of people with tendons fully sheared off the tibia. I agreed to rest and heal.

I rowed instead of ran for four weeks, sinking deep into depression. I desperately tried to fight it, pulling up floors in my house and painting rooms. Trying to stay busy enough that the darkness couldn’t catch me.

While I’d been running, I’d been alive. Not my best self, but myself. Without it, I struggled to exist. By the time my doctor gave me the OK to get back on my feet, I’d been wanting to die for so many days. It was getting harder and harder to ignore. I knew running couldn’t be my only treatment plan, and finally resumed medication.

For several months, running along neighborhood streets and out by alfalfa fields, sweat pouring from every inch of my body, I’d been an athlete. Running really did save my life.

If you like this article, please share it! Your clicks keep us alive!
Tags
running
Depression
depression and exercise
running and depression
exercising with depression