I Challenge You To Love Your Spouse — As Long As He's A Heterosexual Man. 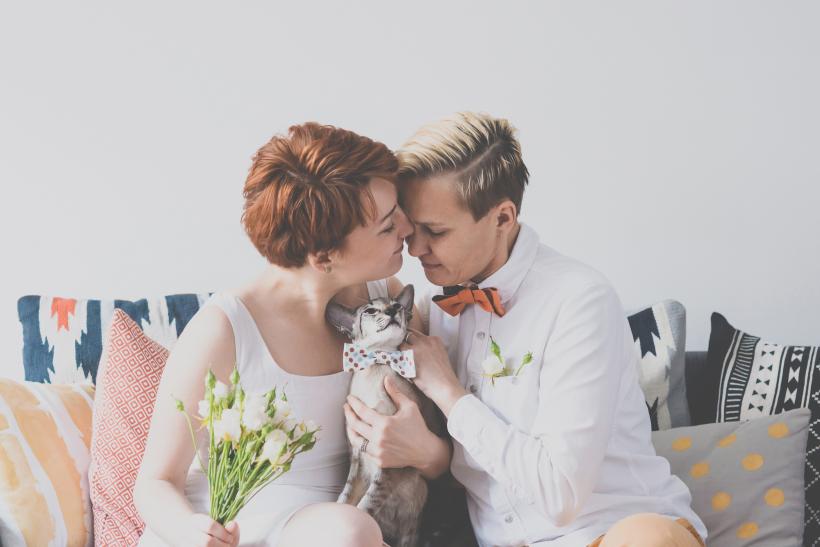 Despite conservative fears, when many people picture what “marriage” is, marriages like mine simply aren’t a part of it. Image: Thinkstock.

If you’re on Facebook, you’ve probably seen the “Love Your Spouse” challenge by now.

But just in case you missed it, it’s a seven-day photo challenge wherein married people are asked to post a picture of their spouse (or of themselves with their spouse, depending on the version) for seven days.

Each day, they’re supposed to “challenge” two other friends (by tagging them) to take part in showing happy pictures with their spouses as well.

As a married person, I get the appeal. I adore my spouse, but in the day-to-day activities of life, it can be easy for that love to fade into the background, and it feels nice to be invited to center our love and commitment to each other.

Except I haven’t been invited.

When I first saw the challenge going around, I expected it was only a matter of time until someone sent it my way. I mean, I’m happily married, and friends have even called my relationship with my wife “inspirational.”

Also, because our first wedding took place before same-sex marriage was legal in our state, we had two separate weddings, both of which were gorgeous (I’m biased, whatever) so we are really really married, and it’s not like folks can forget.

It’s been almost a month since I first saw the challenge poking around, and I’ve yet to be nominated.

I’m not here to whine about being left out of a glorified chain letter — I’m here to talk about implicit (and maybe even explicit) homophobia.

I’m well aware that I could choose to do it without being invited.

But once I noticed that I still hadn’t been invited, I started to notice something else: Everyone that I saw posting “love your spouse” pictures was straight, and the vast majority of them were women.

Now, there could be all kinds of reasons for that!

It’s entirely possible that different groups of people use Facebook differently, and straight women were just the most likely to accept the challenge and want to participate.

It’s also possible that my friends and family just thought I wouldn’t be interested.

Maybe they see me as such a rebel that they thought, Oh, Katherine would just think this is corny.

Yet, when I looked it up, I discovered that an earlier version of the challenge included the line: “To keep the celebration of love and the promotion of traditional marriage going.”

We all know what traditional marriage is code for, folks!

And while I couldn’t find who started the challenge (that’s the nature of the chain letter, I suppose), a quick Google search of the term “love your spouse” brought up a ton of conservative Christian sites, all happy to give you marital advice (unless you’re gay).

The latest version that is going around does not include the “traditional marriage” language, and several people I spoke with said that they had seen gay and queer couples, as well as straight folks, participating in the challenge.

That strikes me as largely a good thing!

We were told that once our marriages were legalized, queer people would no longer face the discrimination we had grown accustomed to — our relationships would be just as valid as anyone else’s!

But when I spoke with queer people about it, I wasn’t the only person to wonder why I hadn’t been tagged yet.

When I decided to search the phrase “Love Your Spouse Challenge” on Facebook, I did find one lesbian couple… Eventually.

But before I found them, I scrolled over well over a hundred (I lost count) images of straight couples, one picture of a computer, one picture of a gun, and one dude who is clearly married to a woman but must have misunderstood (because he just posted a picture of himself).

One poster even included the phrase “Don’t let me down, ladies!” when she tagged her friends, clearly indicating that she saw this “celebration of love and marriage” as the province of straight women.

First of all, I can never get that time back.

And second of all, the demographics of who is participating, and who is being invited to participate, seem clear to me.

As Rachel Charlene Lewis so aptly put it:

Even if LGBTQ people are posting, it's worth thinking about the fact that straight people always feel welcome doing those challenges, while, as a queer person, I would never participate because of a variety of reasons that all boil down to homophobia still being rampant in our society.

One straight family member said she only chose to take part in the challenge after multiple people tagged her.

And therein lies the rub.

We were told that once our marriages were legalized, queer people would no longer face the discrimination we had grown accustomed to — our relationships would be just as valid as anyone else’s!

Some people even worried that legitimizing our relationships would hurt heterosexual marriage.

And yet, that never seems to have panned out.

Despite conservative fears, when many people picture what “marriage” is, marriages like mine simply aren’t a part of it.

And when my straight friends and family members try to think of 14 people they know who are married, my name is never, ever, on that list.