Maybe I WON'T Miss These Years When They're Older 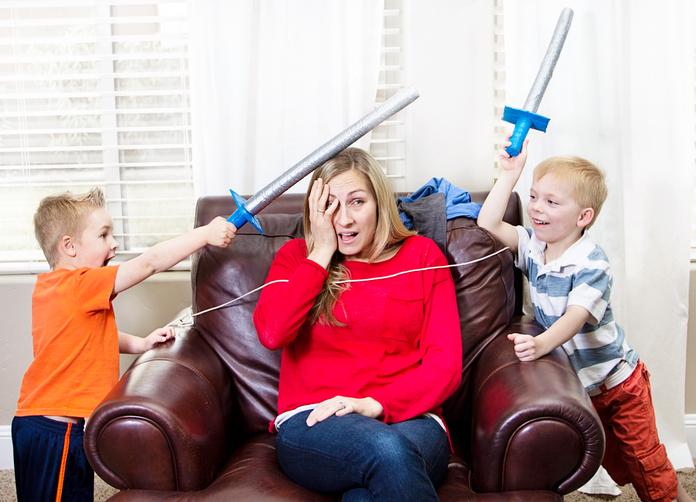 Little ones are... A LOT of work. (Image Credit: Thinkstock)

Some days, I imagine myself secluded in a cabin in the mountains, writing a novel or baking bread or doing nothing at all but basking in silence. Then I hear a crash from another room, one or more children screaming, and the dream is shattered.

I was having one of those days, fantasizing about the future when all three of my children will be in school, and I would at last have at least a few hours of freedom a day.

My son had the day off from kindergarten, and the younger two, as always, were with me also. I don’t get days with all three of them often. But when I do, I don’t find myself cherishing them. Their physical and emotional needs are so intense that I am ragged and rundown by the end of the day. Instead of wishing I could keep them little forever, I can’t wait for my kids to grow up sometimes.

They weren’t being unusually bad, but I found myself exhausted by how unbelievably constant their needs were. I was tired of mediating their bickering. I was tired of the constant noise. I was tired of pointing at the shoes right in front of their faces as they angrily fumed that they COULD NOT FIND THEM.

I was really tired of getting snacks and drinks and more snacks and second breakfasts (for the love of God, do they ever stop eating?), so I called my husband and told him he was taking us out to lunch in the cafeteria at his workplace.

Someday I’ll eat lunch all by myself. Only a few more years, I thought to myself.

We packed up, and I went to visit my husband for lunch, with all three kids in tow. Walking through parking lots is hell, always, because I have more children than hands, and none of them listen very well. Plus, they were over-excited at the prospect of seeing their dad midday, and the thought of eating overpriced grilled cheeses filled them with an ungodly amount of energy.

As I herded them toward the side of the parking lot, an older woman began walking alongside us. She told me how beautiful my family was. She started talking about her own children, now grown and flown.

I knew what was coming. It was the kind intentioned mantra she thought I needed to hear in the midst of my stress-fueled parking lot excursion - it's so much work when they're little, but you'll miss it when they're gone. A call for me to stop and enjoy motherhood. I could feel the guilt starting to creep in around my periphery already. Except that isn't what happened.

But instead of telling me to seize their childhood, this older woman leaned in and told me, "I don't miss those hard years. It will be so nice for you when they're all grown." I looked at her, awestruck.

You’re also supposed to reach a certain age and tell mothers of young children how much they’ll miss these years when they’re over. Tell them how fast it goes, and how wonderful it is, even when it doesn’t feel that way. You’re supposed to feel a void in your life when your kids grow up. You’re supposed to lose a part of yourself to them.

The type of feelings we weren’t supposed to have.

I often feel guilty for fantasizing about regaining freedom as my kids grow older, plagued by the command to "enjoy them while they're young." I suspect there are many sweet moments I will miss from these difficult years, but it was so refreshing to have another mother tell me what I always felt would be true for me: that someday they will grow up, and maybe I won't miss it after all.

If you like this article, please share it! Your clicks keep us alive!
Tags
parenting
motherhood
toddlers
maternal guilt