How “Getting Healthy” Can Become An Eating Disorder 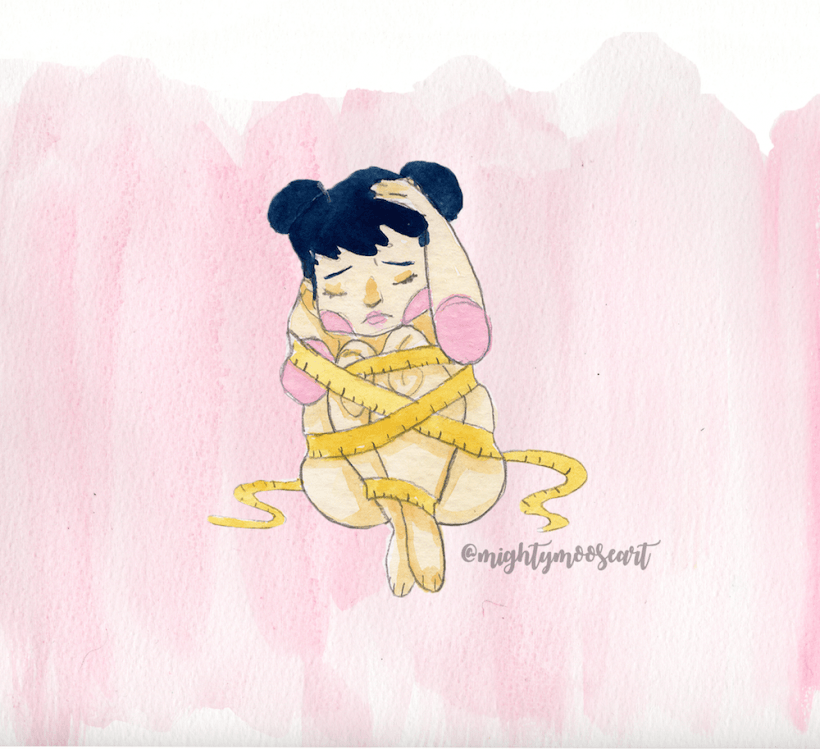 February 26th to March 4th is National Eating Disorder Awareness week. If you need help, you can visit NEDA.com for more information, or call 1(800)931-2237.

I'm sitting knee to knee with my fifth therapist when she tells me I have an eating disorder. It is 2012; I am 38 years old. I have five children, a big house and a car with not one, but two TVs, built right into the headrests — also postpartum depression, anxiety, bipolar disorder, and three teenagers in varying stages of puberty. My marriage is being squashed under the pressure of ex-spouses, a blended family, a 180-mile work commute, and a dog that eats everything, including the vacuum — because being deeply in love, does not guarantee things will go as planned.

And I have an eating disorder.

Technically, by the time I'm in this particular therapist’s office, I'm in recovery from the eating disorder — not recovered, just resting somewhere between sick and well, waiting for the relapse. She's telling me the thing I know but do not want to hear:

“Joni, you have an eating disorder.”

I don’t know if I got an eating disorder, or if the eating disorder got me. What I do know is, five therapists and nine years ago, I was fat. Today I’m roughly the same size I was before the eating disorder came barreling toward me like a freight train, while I stood on the tracks, frozen in time, waiting to be run over, equal parts complacent and exhilarated.

Today, if you asked me, I would still say I was fat, but I wouldn’t say it with the disgust I did then.

I simply don’t hate my body anymore. The hatred didn’t necessarily give way to bliss, but it did give way to something close, something like love. But not before I had to be told by a woman I’d known for all of three hours that I have an eating disorder — not before a lot more therapy.

I figure at some point capitalists realized that since diets are a load of nonsense, set up to make people fail repeatedly, that they’d better devise a new plan to bring the forlorn fatties to Oprah Jesus. So someone, somewhere, in a glass building towering above a city of diet failures, a guy, probably a white guy, decided that “healthy is the new skinny!”

And I, the quintessential failer of diets, bought right in.

By the time I adopted “healthy is the new skinny” as my personal mantra and literal bumper sticker, I was already a couple of pants sizes sunk into my latest “diet” — Weight Watchers, again, because “It Works!” It had already “worked” for me two other times.

One day I was “healthy,” and the next day I was sick — slowly and then all at once.

To the failed dieter, the diet is never to blame — lack of dedication, stamina, willpower, sense, all possible personal reasons for failure, but never the diet. Every time I gained the lost weight back was another opportunity for me to blame myself for another thing, to add another layer of worthlessness onto an ego with no worth, to begin with.

But of course, as every diet is, this would be the last.

The difference between this diet and every other one? Health. I’m not just losing weight; I’m “getting healthy!”

The word “health” is the pressure release valve on the whole affair. I’m not trying to “get skinny” I’m just trying to get healthy. That makes all of this effort ok.

Every billboard, magazine ad, TV commercial that pictures a woman dewy with the sweat of a recent workout, getting “healthy,” pictures a woman who is also thin. And to the woman who really just wants to be thin, but can’t figure out how to get there, this whole “getting healthy” plan seems legitimate, if not genius.

One day I was “healthy,” and the next day I was sick — slowly and then all at once.

If a little health is good, a lot of health is great. And if a lot of health also just happens to be a lot of weight loss, well so be it! I mean, I'm just getting “healthy!” See how “healthy” I am with my running 13 miles at a time and eating dry chicken breast and blueberries. I’m the picture of health.

I’m a billboard, a magazine spread, a success story. I am dewy with sweat, the envy of the women at the gym who drag themselves to the elliptical three times a week to “get healthy” while they watch daytime television and curse the donut they ate that morning, or the donut they didn’t eat but wish they had. In my tiny shorts and sports bra, I’m the center of attention in a weight room full of men, looking so dedicated, so committed, so “healthy.”

I’m a success everywhere, except at my house, where I’ve stashed laxatives in the bathroom behind the toilet paper, in my underwear drawer, in the game closet behind the Connect Four.

They tell us weight gain and loss is just math. Calories in vs. calories expended = net calories. Put that number in a deficit and you’ve got weight loss. They’ve even told us exactly how many calories we need to be in deficit to lose a pound — it factors into every “diet” equation.

Just cut 3500 calories! That’s as easy as removing sugar from your coffee or giving up soda!

Body math isn’t that simple though. There are a lot of factors at work to create a delicate balance of calories, energy expenditure, and hormonal regulation.

But yes, if you start exercising enough to burn every calorie you’ve eaten (and then some), you will lose weight. You will lose a lot of weight, and very rapidly.

You will have done all of this while you were “getting healthy” — right up until you weren’t.

If you’re lucky, like I am, you will have access to five therapists, one of whom will tell you that you have an eating disorder.

If you're reading this and are about to go to the gym, or just got back from the gym, or can't stop thinking about the gym, if your life has become a caloric list of checks and balances and deficits, maybe you're not getting healthy, maybe you're getting sick.

If you're reading this and thinking, this sounds like me, then the bad news is you might be getting sick, but the good news is, you can be well.

If you like this article, please share it! Your clicks keep us alive!
Tags
BB&A
Beyond Before & After
eating disorder
ED recovery
body image
bulimia
exercise bulimia
diet
weight loss