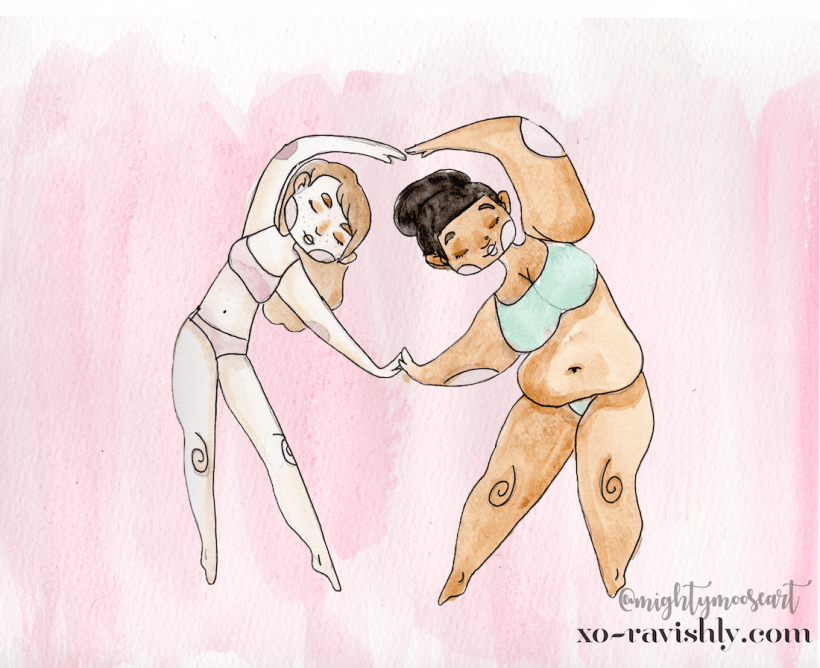 It’s obvious to me that she’s unwell, in part because she apparently lives at the gym, but mostly because her body isn’t more than skin and bone. I see her and I feel for her, I fear for her. I fear for her because I used to be her: the protruding collarbones, the visible ribcage, the pale skin, the impetuousness with which she approaches every machine.

I haven’t spoken to her, not because I don’t care, but because I’m not sure what I would say, except, “Please, for the sake of your life, stop.”

Also at the gym, but less frequently, I see a fat woman in the front row riding the stationary bike.

The front row sits under a wall of eight huge televisions broadcasting everything from Maury Povich in syndicate to Fox News in Closed Caption. There are rowing machines, and standard and recumbent bikes tucked in the front row, hidden by the massive treadmills and elliptical machines just behind them.

The front row is where you go to be invisible.

There is no invisibility clause for the front-row, but I know this is where people hide because I hid there too. This is where you see the fattest folks in the gym, the older women trying to cycle ten stationary miles uphill and away from diabetes, the older men trying to row past the heart disease that their doctors warned them about.

She’s riding this bike, trying to be less fat. I’ve talked to her, while also riding the bike, also trying to be less fat. She’s scared. She has type II diabetes. She knows this diabetes is happening because of insulin resistance, which is happening, at least in part, due to her diet, which she describes as “not good.” She knows that piling insulin on top of insulin resistance is counterintuitive. She’s looking for another way, peddling desperately into wellness.

She watched her mother die with diabetes, a slow progression of symptoms that eventually shut her body down — loss of vision, loss of mobility, loss of her feet, her legs, her kidney function, her life. Front Row Lady does not want to suffer a similar fate.

Every year 74 people per 1,000 die from complications of diabetes — at least those reported as such. Front Row Lady doesn’t know this number, but she knows enough to know that she doesn’t want to be part of it.

Always At The Gym Lady and Front Row Lady are both suffering — different kinds of suffering, but suffering the same.

Always At The Gym Lady probably doesn’t know that every 62 minutes at least one person dies as a result of an eating disorder. She probably doesn’t know that anorexia earns the undesirable designation of the deadliest of these, with a mortality rate of 5.9% per year, or that for females in the 15-24 age range, the mortality rate of anorexia is 12 times higher than all other causes of death.

Eating disorders are scary. She probably knows that much.

They are in part scary because you often can't see them, and often when you do see them, they are masquerading as dedication, determination, stamina, health.

We know eating disorders are scary. Even without statistical data to support this, most of us have seen at least one Afterschool Special or HBO documentary featuring a teenage girl eating nothing but jello and stockpiling jars of vomit in her closet.

We know that what happens as a result of eating disorders can be deadly — malnutrition, heart irregularities, kidney function, pulmonary problems; the list is exhaustive. Because of this, and out of fear for those we love, eating disorders are a social issue that we address openly. We see billboard campaigns and TV commercials. We usher our loved ones into treatment. We write about it. We read about it. We do this because we care about the health of the people we love.

But there is a strange sort of gray area around disordered eating and health and size that we can’t seem to address without causing chaos.

We can talk about the risks associated with being too thin, with a shoulder pat of understanding, because “Oh honey, you don’t have to work so hard to be thin. Thinness isn’t everything.”

But we can’t talk about being fat in the same way because being fat is everything — everything bad. Fat is lazy, slovenly, sinful. It’s the thing no one wants to be. It’s the worst thing you can be in a culture that constantly demands more — more money, more beauty, more work. Fatness is the antithesis of work.

And where health concerns for anorexia are often genuine, most "health advice" given to fat people from family, friends, and assholes on the internet is just thinly (pun sort of intended) fatphobia. It's called concern trolling, and we have learned to be very wary of it. So wary, in fact, that virtually any discussions of weight-related health problems are met with understandable hostility.

If we talk about being fat as being problematic, we’ve betrayed the movement. Somewhere along the way, Fat Positivity came to include this sort of militant, “my body is not your business” attitude. And that’s true; my body is no one’s business but mine.

I’ve written volumes about the problems associated with my prolonged love affair with my eating disorder. Folks are empathetic, worried even. We can talk about this freely, I think because a struggle with an eating disorder that makes you thin is really disguised as dedication, determination, stamina.

My thinness caused me pain and suffering — obsession around food, time lost at the gym, broken bones, hunger, emotional distress.

My fatness too, caused me pain and suffering, different types, but suffering and pain regardless — limited mobility, joint pain, an ankle that wouldn’t heal under the weight of my body, sadness when I couldn’t fit my ass in a swing, distress when I couldn’t follow my kids down the slide.

The discussion of this kind of suffering is nuanced, but necessary.

Calling my fatness problematic doesn’t mean too fat is “bad” anymore than being too thin is “bad” — both extremes warrant discussion. Wanting to change our bodies, and wanting to discuss it while we do, doesn’t mean we can’t love them while we do it.

If you like this article, please share it! Your clicks keep us alive!
Tags
BBA
Beyond Before & After
self-love
self-care
wellness
health
fat
thin
eating disorder