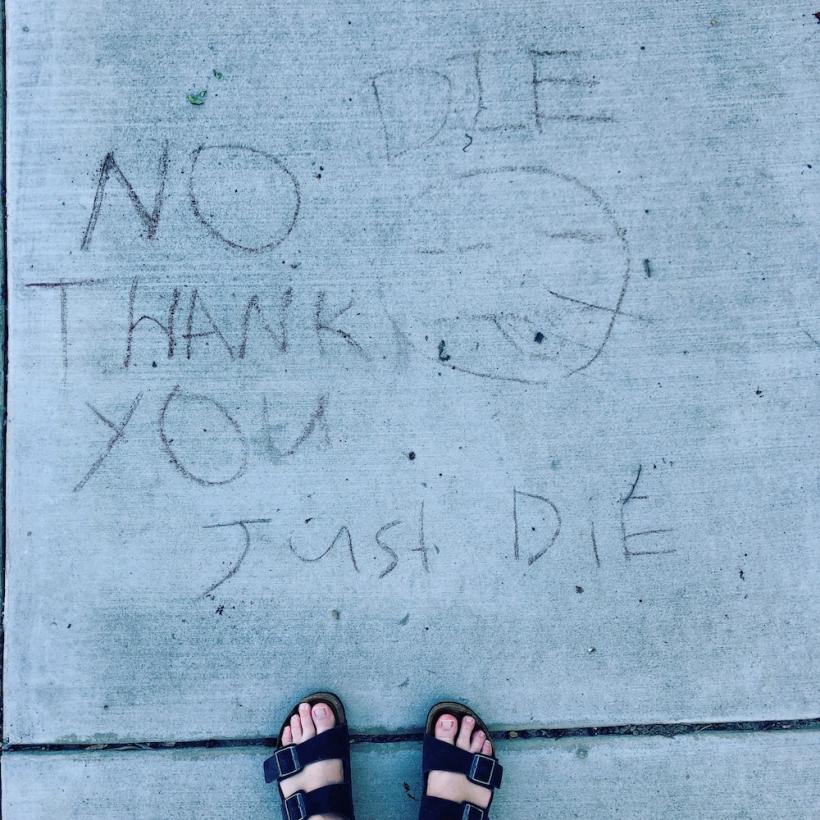 If you’re anything like me, you take one SSRI, one anticonvulsant that was designed to treat seizures but apparently also magically treats Bipolar Disorder (and has a risk of giving you some kind of life-threatening rash), another thing that is a mood stabilizer, 17 different supplements to try to undo the side effects of the three pharmaceuticals, and a thyroid med for shits and giggles.

I hear you saying, “Jeez, Joni — be a fucking downer why don’t you?’

Oh, and about three days of it being in the glorious 70s before it turns 100 degrees and you melt into the pavement like the half-used paperless crayon that you are.

I hear you saying, “Jeez, Joni — who pissed in your coffee?”

But the joke’s on you because I haven’t even had coffee.

Also the joke’s on you because here comes spring and it's bringing Daylight Saving Time. Enjoy that hour of sleep you won’t be getting. If you’re a parent, you can also enjoy your kids acting like complete assholes for no apparent reason other than it’s not dark at 6 pm anymore.

And we probably can’t be friends anymore. Bye.

Did you know that it’s actually called Daylight SAVING Time? Not SAVINGS. If you’ve been saving SAVINGS for the last 30 years, you’re wrong. And no one has corrected you because either they are also wrong OR they don’t want to make you feel stupid.

Here’s some other useless shit you might not know:

1. How did DST start anyway?

Sometime in the early 1900s a English guy was frolicking around the countryside on his horse when he had the bright idea to fuck us all over for the next hundred years by moving the clock in accordance with the sun.

His name was William Willett, but he didn’t actually get to fuck us over.

2. We have the Germans to thank for that.

William didn’t live to see his dreams of making everyone miserable come to fruition, but in 1916 the Germans implemented DST because it was fucking dark and rather than just go the fuck to bed like normal people, they decided to maximize daylight hours and save electricity by just moving the clock around like they control time or some shit.

Leave it to the fucking Germans to be SO obsessed with conservation that they insist the whole world get up an hour earlier.

Why? Probably because they aren’t STUPID.

In all, only about 70 countries observe DST. The ones closest to the Equator don’t because hi, the sun is always shining on them 12 hours a day or some weird equatorial shit.

Contrary to what we’ve been told, DST has nothing to do with farming. Know why? Because CORN CAN’T TELL TIME, OKAY? Farmers don’t care about the clock. They care about where the sun is. The end.

Well, yeah. But that would have been a better story if it weren’t. (Women actually got the vote in 1920 but this joke didn't work using actual facts.)

5. But then it came back during World War II.

Again with the electricity.

6. But then it was repealed again.

Jesus, this is getting confusing.

7. But then we let the states just do what the fuck ever they wanted with time.

So at one point in 1965 there were 23 different start and end dates of DST just in the state of Iowa. (Which is maybe where the whole farmer rumor started.) In 1966 people were so confused that we made it a standardized thing.

And that's why we're all miserable.

If Trump wants to do something useful with his presidency, maybe he could repeal it again.

The weather forecast says it’s going to be 75 today.

Which means it’s probably going to be 110 next week.