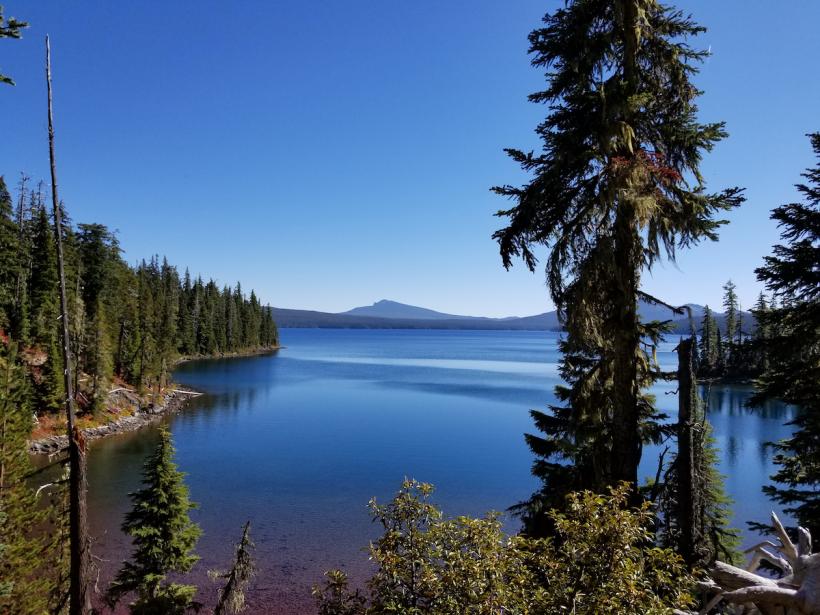 My toe caught the butt of a rock and sent me careening to the ground. I skidded across the forest floor, leaving bits of my flesh embedded in the soil.

“Shit,” I spat into the ground, stuck facedown against the earth.

Sharp pain ricocheted across the torn skin of my palm and kneecap. A dull ache vibrated along the hip that broke the fall. I squeezed my eyes shut; flecks of dirt scratched my eyelids.

This was not how today was supposed to unfold.

I was two weeks into a depressive episode and had decided to spend the afternoon running one of my favorite trails in Oregon, in hopes of landing a much-needed dose of joy and vitality as I darted past the sapphire alpine lake, lichen-streaked evergreens, and bursts of fall foliage.

Trail running is the most dependable source of happiness and strength that I know. Powering my way through stunning wilderness usually invigorates and grounds me. And it provides a venue to redefine my physical and mental limits as I tackle new challenges and distances and terrain.

I wanted the long solo run through the wilderness to remind me of that strength after my depression had spent the last fortnight trying to convince me that I am weak. Depression tethers me to bed, rendering it a herculean effort just to emerge from my cave of flannel bedding. It steals my drive to do anything and everything — and leaves me feeling capable of little other than sleeping. And even that is more difficult when grappling with depression. Every night is disrupted by a tango of tossing and turning.

Depression had sucked the life and determination from my mind and body. It didn’t need to try very hard to convince me that I was weak, as I was flattened across the trail like a fly crushed into a windshield.

So, I forced myself out the door that morning for a run — in a desperate attempt to feel strong and happy after the depression had reduced me to a frozen pile of feeble, miserable mammal. But, after several miles, I had not uncovered an ounce of joy or worth.

As my legs carried me around the crystalline water, I was only tuned into my nagging sadness and constant struggles. My body and mind felt drained; the run felt harder than it should. I was surrounded by sweeping beauty and playful terrain, but I didn’t feel excited or charged by moving through the jaw-dropping nature, I just felt deflated. Stress brewed in my gut as I wallowed in my inability to shoo depression away when its tentacles started to creep back into my brain.

And now I was strewn across the ground, floundering in defeat, tormented by the stark difference between my healthiest self and the version that lay bruised and bloodied and nose-deep in dirt.

While my depression lay dormant over the summer, I’d circumnavigated some of the largest volcanoes in the Pacific Northwest, running giant circles around Mount Rainier, Mount St Helens, Oregon’s Three Sisters. I’d raced 100 kilometers through the Cascade Mountains and summited 10,000-foot peaks with skis strapped to my back.

Today, I couldn’t make it through a run that was a fraction of the others. Not even after depression forced me to shrink my plans for the outing, lowering the distance and intensity of the trek, since I couldn’t muster up the energy to go to the grocery store to get fuel for a long run or to piece together the maps I would need to navigate a new route. I chose the simplest option: a known route, a shorter endeavor. But, even that was proving to be too much. Depression had sucked the life and determination from my mind and body. It didn’t need to try very hard to convince me that I was weak, as I was flattened across the trail like a fly crushed into a windshield.

I scraped myself from the ground and started walking down the ribbon of singletrack that skirted the lakeshore. My body sagged alongside the fireweed that was dying with the impending arrival of winter. Blood trickled down my shin, flush like the scarlet huckleberry bushes that crowded the side of the trail.

“I just want to hide in my bed all day, every day,” I’d told my therapist earlier that week, blinking back a torrent of frustration.

“But, you haven’t, right?” she asked, taking a long, slow sip of tea to let me respond whenever my emotions would allow.

“So, it’s taking some serious energy and effort to leave the house, but you’re doing it,” she said. “Remember that.”

I thought about that conversation now, as I ambled down the trail, not ready to resume running. Picking my pace up to a bounding motion seemed like an insurmountable task at that moment — like putting on pants in the morning, or unburying myself from my fortress of pillows, or walking out the front door.

As I revisited that exchange with my therapist, I thought about how true her words were. It was taking legions more energy to leave the house. And to stay there. Even when I escape depression’s call to burrow away the day, it knots a cord around my torso and tries to yank me back every chance it gets.

It’s an unending battle to resist its force.

It wasn’t fair to maintain similar expectations for myself during a depressive episode and to think that the strength would manifest itself in all of the same ways. I was stoking depression’s vitriol of worthlessness by comparing my experience to healthier times.

I’d rallied myself out of bed that morning. I’d stuffed snacks in a hydration pack and equipped myself with safety essentials. I’d grabbed food and water for my dog and brought him along to jump in the lake and forage for sticks. I’d covered miles of undulating trail. I’d picked myself up off the ground after I fell. And I started moving forward again, one foot in front of the other.

These displays of strength are different from others that I know and seek. I wasn’t running dozens of miles through grueling alpine terrain or climbing to the tip-top of a skyscraping mountain.

I might not be able to slam the door on depression when it comes knocking, but I was finding small ways to move through it.

To spot glimmers of hope beyond the charcoal cloud of depression — that realization gave me the first little burst of joy since leaving the trailhead.

I slowly started running again, streaks of sunlight somersaulted across the trail. Tufts of ferns swayed as I brushed past them. I gazed across the glassy surface of the lake. I could see my starting point on its north shore, speckled with the brilliant hues of fall.

Depression had tucked in beside me since I left that trailhead, meeting each of my strides with its scorn and gloom. All I’d wanted from the day was to squash its voice, to find a counterargument to its ceaseless claims about my weakness through a long run in the wilderness. I hadn’t done that.

But through the dirt and blood and depression, I did recognize the strength that I couldn’t see before I left for the run, and that’s what I really needed to uncover that afternoon.

If you like this article, please share it! Your clicks keep us alive!
Tags
Depression
mental health
mental illness
exercise