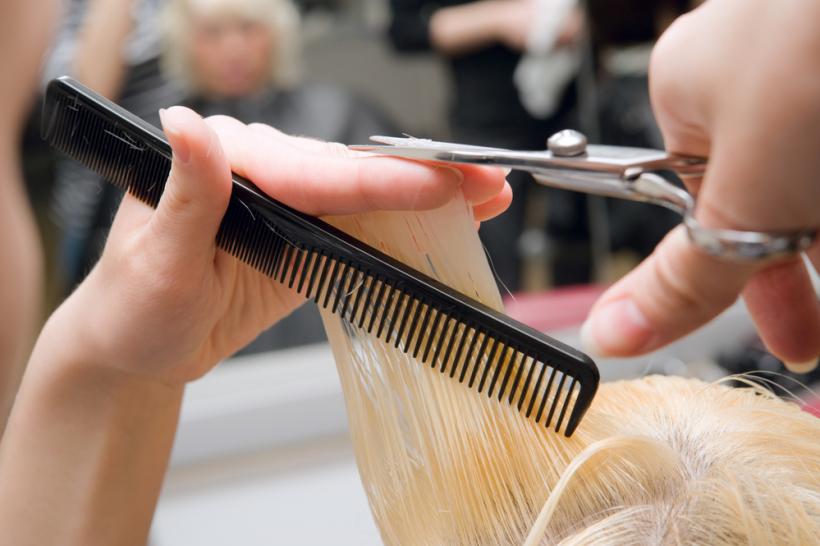 My hair softened those sharp edges. It neutralized the threat of me. It said I was no trouble.

“You have so much hair!” the stylist said, ruffling my scalp. Her touch was intimate, for a first meeting, but I was ready to submit.

“Not for much longer,” I said.

We met eyes in the mirror.

I have always had a lot of hair.

It was blonde when I was young, and when puberty dulled it, my mom bought me Sun-In. That didn’t work, so she drove me to TJ’s Salon on Well Street, where TJ sat me on a black chair with an extra cushion, tied a black satin robe around my straight waist, and slid a rubber cap over my small head. With a little metal hook that looked like something a dentist would use, he pulled a strand of mousy hair through the cap’s hundred tiny holes. He slathered me with a peroxide paste and brought over a stack of sticky Vogue magazines. I was 12.

Twice-a-year color touch-ups aside, my hair was low-maintenance. At school, I tied it back, out of my face and my way as I tromped through the building with my girlfriends, bare-faced and loud, in loose pants and comfortable shoes.

And then came college, which was nothing like that.

I wanted late-night debates; heady zeal and drunk rumination with friends as we sipped something strong in cracked leather chairs.

But before orientation-week ended, I saw how girls were ranked: not by grades or brains or eloquence, but something else. It was the lithe and giggling girls, the pretty things, who were valued. I wanted to be valued.

I decided to play the game on a mountain in the Alps.

My dorm-mates and I sat on a bunk-bed on our college ski trip after the first semester. There was no cracked leather, but we had been sipping something strong and we were solving the world’s problems and I was defending Marx and the air was crisp and I felt so alive.

Two older boys, who ran the ski-trip — and the college — came in to tell us about the bar crawl. In the moment before we saw them, before we silenced ourselves for them, they heard me. Probably they heard things like, “sweatshops” and “proletariat,” and probably it was pretentious and out-of-my-depth. But those words tasted like power in my mouth, and I thought the boys would be impressed. I thought they’d see I was serious and smart and worth their time.

But they balked. They looked at each other, and one cracked a laugh.

“I guess we know what kind of girl you are,” one said, and he snorted as they left the room.

That night, I put on more make-up than I ever had and shook down my hair. I made sure to talk to those boys — not about socialism, but skiing. I made them laugh and touched their chests. They bought me shots, Sambuca, which I hated, but which I drank drank drank. I leaned on one leg when I spoke to them, not looking head-on or straight backed.

They liked me. It was easy.

I grew my hair even longer, because I didn’t have the legs for short skirts, or the patience to keep flirting. It was thick and tumbling and I draped the golden shroud over my shoulders not just in nightclubs, but in class, in meetings with professors, in the grocery store.

Alone or with my friends, I tied my hair in a tight bun. I hated wearing it loose. It blew in the wind, dragged and tangled. In the summer, I scorched beneath it; in winter matted in my scarves. But when I needed something from someone, I let it fall, and people would smile at me and give me what I wanted. It really worked. Cars would let me cross the street, unlike when it was tied back and I was all mottled post-yoga. I liked and hated that fact at the same time.

One of my friends — a frenemy really, the kind of girl who flirts with your boyfriend in front of you, which she did once when she came in to my bedroom and tickled his belly like he was a dog and not six-foot-three, and he backed away from her and laughed in her face, and I loved him in that moment even though I really didn’t like him that much — she called me, “silk-covered steel.” I think she meant it to sting, but it felt accurate enough to write on my headstone.

I was still feisty and ambitious and argumentative.

My hair softened those sharp edges. It neutralized the threat of me. It said I was no trouble.

I wore make-up. I wore dresses.

During graduation, I wept. At the time, I felt sad to leave my friends and our dorms and the cobblestones. But now, I think I was sad just at life passing, like when I stood with my best friend on her front porch when we were 10 years old and we realized we weren’t excited for Christmas.

I was also nervous. A month later, I moved from London to Boston for graduate school.

You Might Also Like: KonMari: The Life-Changing Magic Of What The Hell Happened To My Living Room

That winter, I bought pants to keep the wind-chill off my knees — my first pair in years. But still I went around smiling. And I kept growing my hair.

On my dating profiles, it draped and glinted in each photo. I used it and it worked, but how I resented those boys I ensnared. They would call me, “a blonde chick,” or say, “blonde and Jewish, the genetic jackpot!” and I would seethe. One boyfriend grabbed two fistfuls of my hair and called me, “a sexy little thing,” and at that moment I knew we had no future.

But I didn’t know how else to be.

On election day, I wore my hair down to canvas in New Hampshire; the next morning, I hid behind it, bleary, on the train back to New York where I lived.

That long-buried little seed — of high-school me, unrepentant, brash — started to grow roots.

Two months later, I pulled on a Nasty Woman shirt the morning of the Women’s March in Washington, D.C. I put on foundation, powder, concealer, eyeshadow, another eye shadow, liquid eyeliner, mascara, highlighter and tinted lip balm — just the basics. I shook out my hair, and spread it over myself.

I don’t remember feeling any irony, but the roots must have kept growing. Two weeks later, when the numb fright of November 8th had become mid-January’s wild rage, I booked the appointment.

The stylist cut off 12 inches with a razor. The heavy veil fell so lightly to the floor.

Then, she hugged me.

When I left the salon, I thought the whole world would have changed.

Marching downtown, I texted a selfie to family and friends. My grandmother, a body-shaming misanthrope, replied, “Does your boyfriend like it?” and I cackled. But then a close friend, a good man who calls himself a feminist, asked the same thing, and I clenched my jaw. I strode over Broadway, scowling, making cars stop for me.

“If you think I’d be with a guy who cares about my haircut, you know nothing about me!” I typed, and then I deleted it.

What did I want to say?

I wanted to say that this was deliberately less cute, less likeable; that I’d spent years with hair that was trouble — a mask.

I wanted to say I was done hiding behind girliness.

I wanted to say I felt furious that for my whole adult life, I’d worked to please men I didn’t know or care about, like those older boys on the ski trip, the same boys who’d used a red marker pen to circle the faces of the “hot” girls on the roster of our entering college class, marking the few they could talk with from the homely majority they must shun.

I had so wanted them to draw a circle around my face. And now, finally, I really, really did not.

Still, I couldn’t get back things I’d lost: the needs denied, the hunger, the exhaustion, the hours spent prodding my body, lectures skipped to work out, parties dodged because the alcohol was empty calories and there would be cake.

“I like it, and that’s what matters,” I texted my friend. He sent a thumbs-up emoji.

I smiled, a smile for me. I looked just like I felt inside. I looked like myself. No silk, just steel.

Jasmin Sandelson is a writer and a PhD student in sociology, researching urban poverty, female friendships, and social media. She grew up in London, spent five years in Boston, and now lives in Brooklyn — which she likes best of all — with her partner and their ridiculous dog.

If you like this article, please share it! Your clicks keep us alive!
Tags
beauty standards
hair
haircuts
body image

How A Haircut Changed My Life
Jasmin Sandelson